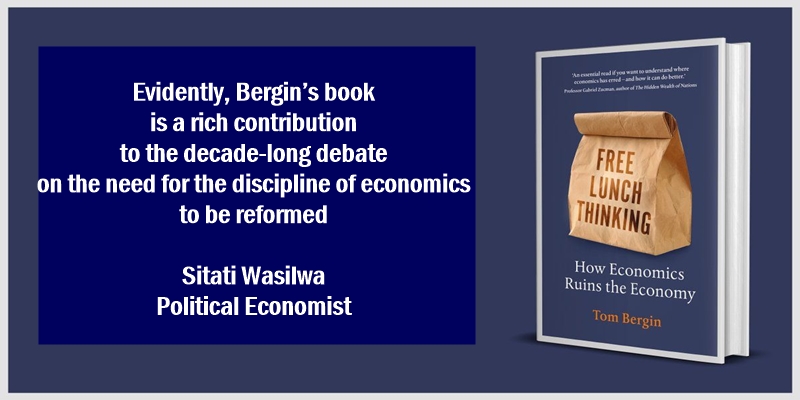 Tom Bergin’s Free Lunch Thinking: How Economics Ruins the Economy is a remarkable book. Bergin presents convincing arguments about some of the long-held, yet misguiding ideologies in the discipline of economics. His impressive deconstruction of tenets enjoying a fanatical following among mainstream economists would certainly tempt one to read the book more than once, perhaps with the exception of neoliberals and libertarians. In debunking some of the myths at the centre of economics, Bergin constantly chides the notion of masking the discipline as a science, particularly the use of mathematical models founded on assumptions that hardly consider the effects of institutional factors that affect the functioning of an economy.

The branding of economics as the high priest of social sciences has its origins in the use of mathematical models which tend to satisfy more the egos of mainstream economists and work less for the majority whom are ideally meant to be the biggest beneficiaries of economic policies.

Evidently, Bergin’s book is a rich contribution to the decade-long debate on the need for the discipline of economics to be reformed. More importantly, it is a primal text on the policy missteps of neoliberalism, and may not attract favourable readership from neoliberals or individuals incapable of questioning the conventional wisdom propagated by most economics faculties and schools around the world.

Bergin’s thesis is summed up in the introduction section where he confidently expresses his desire “to demonstrate how a dangerous blend of political ideology, professional self-interest and unwavering adherence to long-held intellectual frameworks has led to policies that have not only failed to help society as a whole but have also actively harmed it”. And he means business.

There is no discipline religiously corrupted and heavily influenced by politics such as economics. Bergin effectively demonstrates this in the entire book starting with chapter one which is wholly dedicated to the deconstruction of the economic ideology of Arthur Laffer, a revered supply-side economist.

Before challenging Laffer’s notion on the significance of lower taxes as a policy measure to stimulate economic growth, Bergin first outlines the historical origins and political consequences of the Laffer Curve which he refers to as voodoo economics. Following the stagflation of the 1970s characterised by slow economic growth, high inflation and high unemployment, economic policy wonks largely in the Western world were in search for economic frameworks that would hopefully restore the prosperity witnessed after World War II often referred to as the Golden Age of Capitalism. But one has to be careful when making reference to the Golden Age of Capitalism because it obviously suits the Western world; Africa was choking from colonialism and its wanton legacy during this epoch.

Laffer’s crusade in support for lower taxes as put forth by Bergin was influenced by the Canadian economist and Nobel memorial prize winner for economics Robert Mundell. Mundell’s growing scepticism about the “increasing role of the state in the economy” in the 1960s evidenced by a rise in government spending and tax as a proportion of total output in Western countries mesmerised Laffer. Laffer was a leading voice against high taxes in the 1970s arguing, as stated by Bergin, “that prevailing tax rates were so damaging to the economy as a whole that they were actually producing less revenue than lower tax rates would have done”.

The ideas of Laffer – represented by the Laffer Curve – were embraced by right-wing and right-of-centre politicians in the USA (majorly in the Republican Party), the UK (the Conservative Party) and Australia among other developed economies. As noted by Bergin, Laffer’s ideas are still popular with today’s Western right-wing leaning politicians such as UK’s Prime Minister Boris Johnson and former US President Donald Trump “whom Laffer has advised during his candidacy and presidency”.

Do lower taxes lead to higher growth? Or, do higher taxes lead to lower growth? What about the expanding role of the government? Bergin weaves historical evidence from the USA, UK, France and Japan noting that they experienced higher growth when they had high tax- or government-spending-to-GDP ratio and vice versa. To further elaborate his argument, he poses the question: “…why do cross-country comparisons show that having a low tax- or government-spending-to-GDP has been a feature common to poor countries, not rich ones?”

While acknowledging the harmful nature of wasteful government spending, Bergin points out the lack of consistent evidence documenting high taxes and high government spending as causes of slow growth mostly in the developed economies. He sums it up by admonishing the cultish free lunch tendency to cut taxes with the expectation of a long-term increase in revenues. Tax cuts may only boost growth in the short-term.

Bergin proceeds by deflating the mainstream thinking that high taxes make people lazy. At the outset, he notes that this notion neglects the ambitions and hard-working nature of most individuals. By using tons of evidence, Bergin demonstrates that an increase in taxes barely prompts business leaders and wealthy individuals to move out of their countries of origin, but mostly in the developed or fast developing countries. He further notes that there is no empirical evidence indicating that business leaders and the wealthy worked less hard when taxes are increased.

He again pokes holes in the argument fronted by supply-siders regarding the need to cut taxes, affirming the essence of such a policy to only boosting growth in the short-term. Bergin notes that “tax cuts now will lead to tax increases later, and that the effect of such measures will be contractionary, because governments will spend that money servicing debt in the future rather than funding stimulative programmes…”.

According to Bergin, the fear of levying high taxes especially on the wealthy depicts the irrational nature of human beings; it also encapsulates the dogma of trickle-down economics with worries that an economy may experience a downward spiral if high taxes are imposed on the rich.

Contrary to the prevailing economic orthodoxy, Bergin patches up evidence arguing that less labour market protections do not automatically lead to creation of more jobs. In a world where neoliberalism seems to be the blueprint of economic policy, labour unions and the labour market protections are fast becoming irrelevant largely due to the politicisation of the discipline of economics especially in the West, and the successful exportation of such ideas to other parts of the world by missionaries from the World Bank and the International Monetary Fund (IMF).

In exploring the hiring and firing debate, Bergin empirically argues that liberalised labour markets may not after all be good for business for various reasons. First, such markets are prone to high staff turnover and thus “increased training and recruitment costs”. In essence, labour rules act as a disincentive for employees to switch jobs due to the high hypothetical cost they are likely to experience. Second, fluid labour markets are less likely to enhance skills deepening with Bergin noting that employment protection is highly likely to promote upskilling especially if an employee is bound to work at a given place for a long time. As such, more productivity and thus an increase in growth is highly likely to be achieved with employment protections than under the liberalised regime. Bergin notes that employment protections reduce “unfair dismissals” and lead to better payment and thus an improvement in the welfare of employees. This is contrary to the fluid labour market characterised by faster dismissals with Bergin arguing that “easy firing is associated by some with the growth of low-skill, low-productivity and inevitably low-income jobs”.

Most individuals are guilty of entertaining thoughts that higher pay can make one an effective manager, a claim advanced by American economist Michael Jensen. In his iconoclast fashion, Bergin posits that there is “no evidence that bonuses push executives to work harder or better than their natural inclinations would prompt them to do”. He goes to the extent of referring to the works of a former CEO who became a faculty member at Harvard Business School stating that CEOs cannot be transformed into better decision makers by financial incentives. Bergin questions the share-based compensation popularised by Jensen by making reference to a research paper authored in 2004 by Jensen himself and Kevin Murphy; “that shares could be overvalued, and that in such situations…share-based pay could be value destructive for a company”.

As if to further annoy adherents of neoliberalism, Bergin presents a strong argument against the long-held view that minimum wage leads to the creation of few jobs. Based on empirical evidence, Bergin notes that “The inevitable answer to the question of why minimum wages can lift wages for millions of workers without killing jobs is that labour markets are far more complex and nuanced than the rigid supply-and-demand graph would suggest”.

Bergin furthers his case against orthodox economic thinking and practice questioning the validity of sin taxes meant to predict and control human behaviour. He argues out that increasing taxes on certain commodities to increase their prices in order to reduce their consumption is not as effective as it is perceived. He presents other convincing mechanisms that can be explored to discourage bad behaviour or encourage good behaviour.

In what may sound as an affront on neoliberals and libertarians alike, Bergin challenges the notion that government regulation dampens economic growth. His remarks are largely influenced by the fact that most anti-regulation economists base their policy arguments on ideologies and not on empirical evidence. In his nonconformist manner, he calls out the World Bank’s “Doing Business” report specifically noting “the grumbling tone it adopts when talking about regulation”. Bergin states that it is not obvious that all regulations are constructive and insists on the evaluation of the prevailing situations by looking at the grand scheme of things.

What’s more, Bergin reflects on the craze to slash corporate taxes particularly in Western countries convincingly arguing – neoclassicals/neoliberals may not be convinced – that tax cuts do not boost investment and “Tax cuts today must translate into spending cuts or tax rises later”.

Bergin concludes by making reference to a few economic thinkers who have questioned some of the mainstream ideas and practices dominant in the discipline of economics. For instance, he recounts his meeting with Paul Romer who referred to the leaders of the Chicago School – a notorious economics faculty – as pseudo-scientists and frauds. Additionally, Bergin revisits Romer’s view that most economists mostly hide the flaws of their theories and hence policies in complex mathematical models. In recalling his encounter with Romer, the meeting never ended without a serious lash on the Chicago School noting that it “was a libertarian, anti-government ideological project rather than a scientific endeavour”. Bergin also recalls the thoughts of Alfred Marshall and John Maynard Keynes with regards to an institutionalist approach in understanding the functioning of an economy. Lastly, referring to Ronald Coase who suggested the need for economics “to step away from the econometric models”, Bergin quotes him: “It is suicidal for the field (economics) to slide into a hard science of choice, ignoring the influences of society, history, culture, and politics on the working of the economy”.

Should I say that Bergin presents a compelling case against tenets of neoliberalism? Fashionably, yes. But also, an exemplary account for reformation of the discipline of economics and policymaking. Free Lunch Thinking is a book worth reading!

Sitati Wasilwa is a political economist, consultant, writer and moderator. He is a youth leader at Kenya YMCA and a member of the Local Solutions Youth Panel at the Global Youth Mobilization. Twitter: @SitatiWasilwa LinkedIn: Sitati Wasilwa Blog: The Kavirondo Facebook: Sitati Wasilwa

This article has been read 504 times
COMMENTS