Russian Aggression: Through Ukraine to The Edge of World War III 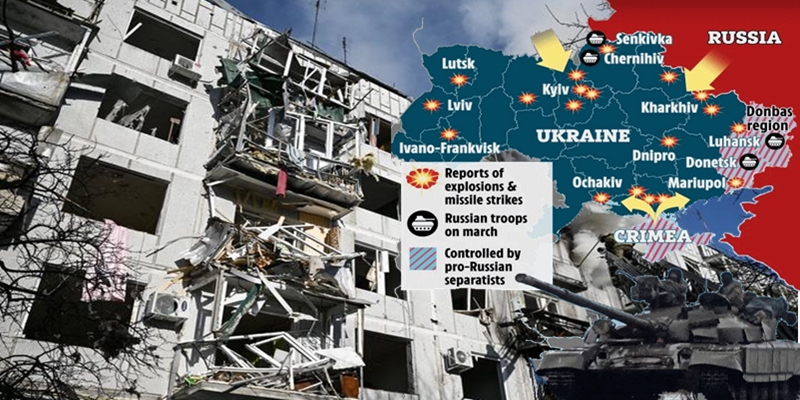 In the game of world wars, there are three players: Those who are serious; those who see war as a means to wealth and influence; and those who are powerless. The first two categories become newsmakers and/or victors, and the last category becomes victims. There are two truisms about war; it is inevitable, and it has casualties, intended or inadvertent. And each declaration of war is pretexted on three grounds: National pride or embarrassment; national expansion/occupation; or reclaiming of past fortunes or glory. Interestingly, both previous two world wars began with the combination of the three grounds, and both totally ignored international law.

On February 21st, 2022, President Vladimir Putin signed decrees to recognize two self-proclaimed separatist republics in eastern Ukraine and vowed to send “peacekeeping forces” to the breakaway regions of Donetsk and Luhansk. Putin claimed that there were already military conflicts going on in the separatist regions; Ukraine denied the claim. Both sides had hidden agendas. If, indeed, Ukraine had been attacking the separatists, then Russia would be justified to support the two regions through military intervention. If, however, Ukraine had to attack the two separatists regions, Russia would portray Ukraine as the aggressor intending to mount an unprovoked assault on areas controlled by the separatists which are backed by Moscow.

The second pretext, and bordering on national defence and protection, is Moscow’s claim that Ukraine has a built up of a 60,000-strong military group with nuclear weapons, heavy armaments, and other multiple-launch systems able to destabilize Russia. Putin would then be justified that he was only “defending” the integrity and safety of his people.

Like the second pretext, the third pretext is a claim by Moscow that the US is building a nuclear base in Ukraine. This would then be seen as a direct targeting of Russia and an advantage in case of US aggression against Russia, now or in future.

The fourth pretext is what Moscow might refer to as de-Nazification of Ukraine. For some times, Russia has been accusing Ukraine of harboring Nazi elements and Nazi-leanings. And Russia sees this as a campaign to persecute Russian speakers and interests in Ukraine. It is ironic that President Zelensky, the President of Ukraine, is a Jewish-born citizen of Ukraine.

The fifth and sixth pretexts are more than just excuses, they have been built-up from past years to the present. For years, Russia had fought wars of acquisition in Chechen such as the First Chechen War of 1994, Second Chechen War of 1999 and the devastating 2010 Chechen Parliament attack. But the December 4th, 2014, Grozny, Chechnya, attack, though instigated by Islamist militants, is seen as the declaration of Putin’s intention for world dominance. The attack coincided with Putin’s state of the nation address.

The final decision to put his long-awaited-for plan, presented itself when Donald Trump was elected President of US in 2016. Putin himself had been in power from as early as 1999, when he was Prime Minister till 2000 and again from 2008 to 2012. He was elected as president for the third term of office from 2012 to 2018, when the constitution was amended to grant Putin a fourth presidential term, and Putin could lead Russia till 2036. He is just one of the fewest former heads of state to accept a vice-presidential position in order to reclaim the presidency and consolidate his power. In one way or the other, Putin has been in power for about 22 years.

President Putin has had the chance many world dictators do not have. He has been in power for a long time, in Europe, and has seen many governments in Western and Eastern Europe come and go. He has also had the rare chance to see the vulnerability of such international and regional organizations as the UN and the EU and, of course, NATO. He has interacted with replacement leaders in each of these organizations, from 1999. He knows and understands their goings and comings, their weaknesses and strengths. In addition, Russia under Putin has, largely, lived under perpetual economic sanctions in one form or the other. When one computes the observations, it makes sense to see how decisive President Putin has gotten.

Moreover, Putin understands one major weakness world powers have, which, in all fairness, provides him with tremendous cover and leverage – that the world is reluctant to trigger World War III. They can condemn the actions, and even call for economic sanctions, but they can’t attack Russia. This is being demonstrated in three actions that President Putin has made. First, he has warned the world that if any nation, or anyone for that matter, intervenes in the Russia-Ukraine War (2022), they will be met with “consequences you have never seen.”

Second, Putin knows that, despite all the economic warnings to the contrary, Russia holds the West hostage in terms of oil and gas – Russia supplies about one-third of Western-Europe’s crude oil. And as a direct consequence of this, President Putin also knows that any action carried out by NATO or the UN, will harm the Western nations with hiking prices at the pump. Then, he also knows that, when he continues his aggressive attack, the markets will tank, and, therefore, bringing collateral damage even to those nations and individuals who are not under economic sanctions. Indeed, any action that may be undertaken by the world will have an undesired impact of affecting the world – it’s like a boomerang. Putin also knows that imposing hefty economic sanctions on Russia, in a world in which nations are just recovering from the vagaries of Covid-19 pandemic on their economies, will send inflation to the roof.

And third, and as alluded to, President Putin studied the reaction of the world to President Trump’s reign. Trump shuddered the world powers and both regional and international bodies. He acted almost unilaterally and arbitrarily and, other than losing his presidential bid for a second term, nothing and no-one stopped him, serve for mere rhetoric. If Trump is the lever through which Putin is measuring his actions, he knows that other than condemning and reporting in press and media, the world bodies and governments are impotent to taking any further actions that can stop him.

On February 23rd, 2022, President Putin attacked Ukraine in multiple cities. And, as expected, the only thing that world leaders could do was condemn, warn of imposing additional economic sanctions and pleading for peace. It is ironic that the UN Secretary General understands the endgame of Putin’s chess game (that of bringing the world to a brink or a world war) and in the words of Antonio Guterres, the entire global economy will be at risk in this war: “In the name of humanity do not allow to start in Europe what could be the worst war since the beginning of the century, with consequences not only devastating for Ukraine, not only tragic for the Russian Federation, but with an impact we cannot even foresee in relation to the consequences for the global economy.” And a worst war it could be – nearly both camps (Russia-China) and UN-NATO) have built up nuclear capabilities since 1946, and any leak could not only damage the world economy but could wipe out the entire human race.

And to rub salt to injury, Ukraine has been left to stand alone. The only response from major democracies is to send in weapon and moral support, but not direct military intervention. Putin has calculated that, by the time major democracies, UN, NATO or EU will be figuring out that economic sanctions are not working, he would have achieved his objective – paralysing Ukraine. By the time everyone will awake, Ukraine may be, again, a buffer of Russia, or worse, a World War III could be festering. God forbid.

But there is only one factor that can stop Russia – it is not Europe or America, unless they engage in war; the only one who can stop Russia peacefully and genuinely is China. Russia can’t survive alone; it needs China. And if China says, no thanks, Putin’s chances of success will be almost zero.

And, not to mention, empathetic

How that world bodies and leaders

Their efforts only end up in news feeders

While to Russia, Ukraine fastly fall

This article has been read 753 times
COMMENTS