Imperialism, Instability and Coups in the Sahel Region 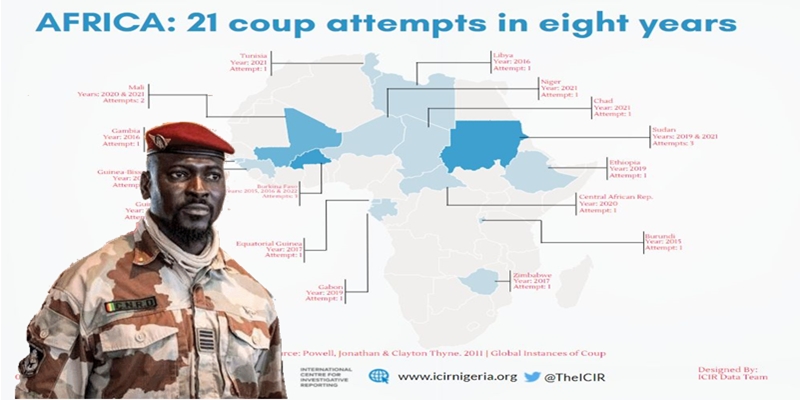 About ten African countries have experienced successful or attempted military coups in the last two or so years. Guinea, Sudan, Chad, Mali, Burkina Faso and Guinea Bissau have a troubled history of coups. Conditions that historically precipitated coups in these countries barely faded before the recent takeovers. Instead, they were firmed up by decades of poor governance and imperialism. These countries are victims of harsh, brutal and extractive autocratic regimes and foreign states.

While the aforementioned countries are historically predisposed to coups, context is key in understanding the recent wave of political instability in the Sahel region.

Superficially, one could be tempted to consider the coups in Mali and Burkina Faso as structurally different from the rest – they were fanned by rising insecurity. For Guinea, Sudan and Chad, it was the typical military hegemony fighting back. But these are conventional takes, I suppose. Unconventionally though, a few may agree, the primary cause of coups in Mali and Burkina Faso is imperialism.

Collapse of the Libyan State

A lot has been said and written by Muammar Gaddafi’s apologists and denigrators in almost equal measure. The once christened ‘Mad Dog of the Middle East’ was right after all on the primary objectives of the power war by the United States of America (USA) and North Atlantic Treaty Organization (NATO) allied states – “…to control Libyan oil and to control Libyan land, to colonise Libya once again”.

The post-Gaddafi Libyan state is a wretched territory, unfit for human subsistence. Libya is another Iraq and Afghanistan in the making. Attaining stability in Africa’s once considered welfare state is presently nightmarish. How quickly it would turn out to be a graveyard of empires is a function of time!

Gaddafi’s warning to former British prime minister Tony Blair now sounds prophetic! The slain Libyan revolutionary warned Blair that his ouster would pave the way for Al Qaeda not only to call the shots in Libya, but to invade Europe.

It’s a shame that African scholars and intellectuals have barely engaged in discourses about Gaddafi. Methinks that he was a widely misunderstood personality largely because of one-sided Western narratives. Reliving Gaddafi’s thoughts and ideas is a tale for another day.

Gaddafi’s ouster led to the proliferation of arms across Sahelian states. Mercenaries were hired from Chad, Mali, Sudan and a host of other Sahelian countries to fight in the Libyan civil wars. The occasional retreats of the mercenaries, and of course their need for economic, and partly political survival, would lead to trade in arms – temporary or otherwise.

What’s more, terrorist groups whose fighters played a role in toppling Gaddafi found the need to spread their radical ideologies in the Sahel. The two factors led to a surge in attacks by terrorist groups and other armed groups in the region. This qualifies my thinking on imperialism as the structural cause of some of the recent coups, especially in Mali and Burkina Faso.

Naysayers may sneer at my submission on the fall of Gaddafi and the disintegration of the Libyan state as the systemic causes of the mutinies, especially in Mali and Burkina Faso. They may argue that some countries neighbouring Libya such as Egypt, Algeria and Mauritania have successfully guarded themselves against attacks by terrorists and other armed groups. That’s true, but context is important.

Governance institutions in these latter countries, though led by authoritarian regimes over time, are way superior to the dilettantish, sub-par, outright malfunctional institutions in Mali, Burkina Faso, Guinea and Chad. Could be a good example of benevolent and malevolent autocrats.

Where do we go from here in view of imperialism, instability and the recent coups?

Rising insecurity and the institutionalisation of military regimes in some of the Sahelian states have led to a spurt in anti-French sentiments. Anti-French protests have been held in Mali, Burkina Faso, Niger and Guinea. France deployed its troops in Mali in 2013, but their presence can be considered a failure.

The commencement of Operation Barkhane in the larger Sahel region under the command of French troops barely addressed the immediate security needs of the region’s populace. The eventual withdrawal of French forces from Mali could as well lead to their ultimate exodus from the Sahel region. The USA’s failed mission and cowardly pullout from Afghanistan could tweak France’s military policy in West Africa. The redeployment of French forces from Mali to Niger could trigger anti-French sentiments in the latter. This would bid a long, somehow strange goodbye to France’s direct military engagement in the Sahel.

Russian influence is poised to grow in the Sahel, especially with the rise of anti-French sentiments. More deployment of Russian mercenaries and security forces could likely occur with the military-led governments seeking external help in containing the insecurity situation. Bear in mind that protesters in pro-coup and anti-French rallies in Guinea, Mali and Burkina Faso have ritualistically waved Russian flags. The imminent rise of Russia as a major global power player could be well reflected by its increased involvement in some of the troubled Sahelian states.

The African Union (AU) could come out as a discredited institution following the growing insecurity and coups. What’s its capacity? How is it competently structured? Is it a dog that barks, but seldomly bites? It may be a good-for-nothing institution after all.

And, most importantly, the recent spate of coups could trigger attempted or successful ousters in other African countries. Countries at risk include Benin, Niger, the Central African Republic and Togo given their troubled histories and a somewhat upward trajectory of terrorist attacks.

This article has been read 3,223 times
COMMENTS