To Win Over Odinga, Ruto Must Counter Prevailing Narratives 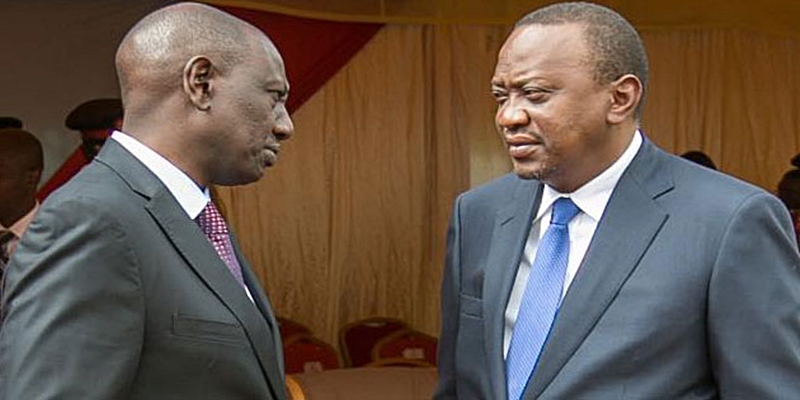 Although Kenya’s general election is a few months away, it’s easy to accurately presage the hit and the dud. This is easier since­­­­ as many Kenyan analysts put it, the election is a two-horse race–namely, Azimio la Umoja’s candidate, former Prime Minister Raila Amolo Odinga, who’s copiously backed by the outgoing President Uhuru Kenyatta and William Ruto, deputy president who’s currently involved in tiffs with his boss who abandoned him.

Today we will examine how one of the horses, William Ruto, has a murky way ahead compared to his challenger. Odinga seems to have gained more lunge than Ruto after securing Kenyatta’s endorsement. This means, Ruto needs to overcome that and other following hurdles.

First, Ruto must credibly explain to Kenyan voters why his boss has distrusted and ditched him. Are there any scores to settle between the duo? What don’t we know but need to know? Kenyatta alleges that Ruto is over ambitious, impatient, and didn’t do his work since he spent five years campaigning prematurely in lieu of serving Kenyans while he enjoyed all emoluments for doing nothing.

Second, Kenyatta accused his deputy of extra-large or malodourous venality. He challenged Ruto to tell Kenyans how he made the money he dishes out wherever he goes. Kenyatta insinuated that some of the monies are proceeds of corruption among which are the projects of Arror and Kimwarer dams that have never lifted off from the drawing board.

Third, Ruto needs to rethink his wheelbarrow since he preaches wheelbarrow and lives helicopters. He needs to understand that this priscus tool doesn’t enthuse any sane person even himself. Who needs a trolley at the age of advanced technology? Wheelbarrow promise reminds Kenyans of his promise of laptops. Are pushcarts laptops? How many computers has he ever delivered, when and where? On top of wheelbarrow, Ruto needs to rethink his philosophy of hustler. He calls himself a hustler while actually he’s but a nawab.  Ruto’s true life is practically that of a tycoon who can afford to dish out millions of shillings and live like a Gulf Emir or sheik. Can a guy who owns five choppers and a couple of hotels, mansions and plots be a hustler?  Kenyans would like to know the miracle the former kuku seller–––whose salary is public–––performed to amass such mammoth mammon.

Fourth, Ruto needs to revisit his membership carefully and honestly to YK’92, which left many Kenyans with scars thanks to a coldblooded dictatorial and venal regime under Daniel arap Moi, his cloner and mentor who, however, dismissed him before his death.

Fifth, Ruto must reconsider his diplomatic savoir-faire. Who’s forgotten how he recently demeaned and piqued the DRC averring that it has no single bovine so as to cause tantrums in Kinshasa to shoot through the roof? As if this wasn’t enough, Ruto recently visited the US with the entourage of tens of eaters even before ascending to the mighty seat of power. This has its telltale ramifications for Ruto, which are definitely not good for Kenya and himself.  Who funded this eating and dallying spree in the first place? Methinks. Was there any necessity really? Kenyan voters and manmade paupers would badly and quickly like Ruto to show cause how he minted and printed such dosh to be sure that he’s the man of probity in whose hand to entrust their country.

Why Odinga is poised to win over Ruto

First, Odinga has an impeccable history of peacemaking and coalition forming. His handshakes speak volumes. His handshake with Mwai Kibaki ended the 2007-8 post-election violence under the so-called power sharing or nusu mkate deal. His handshake with Uhuru in 2018 culminated in the peace that Kenya is now enjoying. Lest we forget. Odinga, apart from being clean comparably, he’s a nationalist and a pan-Africanist and this gives him more edge over his challenger.

Second, Odinga sacrificially contributed to the struggle for second liberation, which, essentially was hindered by Moi and his standbys among who was Ruto. For millions of Kenyans who either suffered directly or indirectly, Odinga isn’t an ordinary politician but a hero who contributed hugely to their liberation and practical joie de vivre.

Third, Odinga has a likable personal charisma. For those who were jailed under Moi dictatorship, Odinga looks like them. For those who were tortured, this is their man. Those who were robbed, this is their typical replica. Historically, while Ruto’s cloned by and related to the perpetrators, Odinga’s a victim with other victims. Odinga has always associated with democrats or reputable leaders such as the late John Magufuli and Olusegun Obasanjo among many. This has positive ramifications for a person who wants to lead Kenya and Kenya in general.

In a nutshell, considering the above facts, the so-called two-horse race is nothing but the race between a horse and a donkey. Who’s a donkey and horse, just review the facts above.

Lifetime member of the Writers' Alliance of Newfoundland and Labrador (WANL), an expert in Terrorism and author of over 20 books among which are Africa Reunite or Perish, 'Is It Global War on Terrorism' or Global War over Terra Africana? How Africa Developed Europe and contributed many chapters in scholarly works.

This article has been read 796 times
COMMENTS