Russia-Ukraine Crisis: Which Way for Africa? 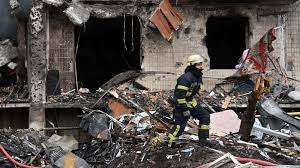 As oftentimes said, Russia and Africa have traditional and cordial relations. Both have common understanding and position on global questions at international platforms, especially at the United Nations. At the UN General Assembly in March 2022, Africans were sharply divided with their votes, since then have divergent views and worse, afraid of contradictions and confrontations posed by the Russia-Ukraine crisis and effects on future diplomatic relations.

Within the confines of international law, political independence, the national sovereignty, territorial integrity are the most important for Ukraine. The circumstances demand settling their international disputes by peaceful means in such a manner that international peace and security, and justice are not endangered has been profoundly undermined.

Since his appointment, Russian Foreign Minister Sergei Lavrov has repeatedly stressed in all his speeches and with almost all African delegations the traditional and friendly relationship between Russia and African countries. He mentions that it is time-tested, characterized by a high level of mutual trust and more democratic polycentric world order, and that it sees Russia and Africa closely cooperate on significant questions at the United Nations.

Russia and Africa want all UN members to dialogue and respect the right of nations to decide their destinies independently, as well as a search for reliable consensus solutions in settling conflicts and overcoming crises. Recalling from Sochi summit, the joint political declaration concretely reflects the principles coordinated by the two sides, the most important are:

--respect for international law and the UN Charter,

--a world order based on the principles of multilateralism, respect for national sovereignty, non-interference in the internal affairs of other countries

--the peaceful settlement of crises

--the protection of national identity and civilisational and cultural pluralism

In an AU Commission official  statement released this year on February 28 in Addis Ababa, Ethiopia, the current Chair of the African Union and President of the Republic of Senegal, Macky Sall, and the Chairperson of the African Union Commission, Moussa Faki Mahamat, noted closely the seriousness of the dangerous developments in Ukraine.

They called on the Russian Federation and any other regional or international actor to imperatively respect international law, the territorial integrity and national sovereignty of Ukraine. The statement unreservedly urged "the two parties to establish an immediate ceasefire and to open political negotiations without delay, under the auspices of the United Nations, in order to preserve the world from the consequences of planetary conflict, and in the interests of peace and stability in international relations in service of all the peoples of the world."

The UN General Assembly overwhelmingly adopted a resolution that "demands" Russia "immediately" withdraw from Ukraine, in a powerful rebuke of Moscow's invasion by a vast majority of the world's nations. After more than two days of extraordinary debate, which saw the Ukrainian ambassador accuse Russia of genocide, 141 out of 193 member states voted for the non-binding resolution.

China was among the 35 countries which abstained, while just five -- Eritrea, North Korea, Syria, Belarus and of course Russia -- voted against it. The resolution "deplores" the invasion of Ukraine "in the strongest terms" and condemns President Vladimir Putin's decision to put his nuclear forces on alert.

As already known, both were together part of the Soviet Union but became independent republics in 1991. Under the directorship of Russian President Vladimir Putin, and approved by the both Federation Council and the State Duma, Russian establishment made the decision to hold a "special military operation" that allegedly aims at the demilitarization and denazification of Ukraine.

Arguably, African representatives and their votes was considered very interesting. Some 17 African countries abstained from the vote at the UN General Assembly to deplore the Russian invasion of Ukraine while some other 28 countries in the continent voted in favour. Among those abstaining from vote were South Africa, Algeria, Uganda, Burundi, Senegal, South Sudan, Mali and Mozambique. Others were Sudan, Namibia, Angola, Zimbabwe, Equatorial Guinea, Central Africa Republic, Madagascar, Tanzania and Congo.

Burkina Faso, Cameroon, Guinea Bissau, Ethiopia, Eswatini were not in the room. Uganda said it abstained from the vote to uphold “neutrality” as the incoming chair of the Non-Aligned Movement (NAM). NAM is a forum made up of 120 developing countries to assert their independence from the competing claims of the two superpowers.

A quick study vividly shows that Africa has three distinctive groups: those who voted for, those who voted against and those that completely abstained. South Africa's Foreign Ministry slightly backtracked with a statement explaining their abstention, saying the UN resolution does not "create an environment conducive for diplomacy."

"If South Africa felt so strongly about the failures of the resolution as it was written, it should have voted against. And South Africa … as well as five other liberation movements in southern Africa, have historical ties with the former Soviet Union," he tells RFI. "All six abstained in the vote."

Writing in the Nigerian Premium Times, Lawyer Chidi Anselm Odinkalu describes the breakdown of the African vote as naturally set tongues wagging about Africa's position in this Russia-Ukraine crisis. Governments in many of the African countries that abstained have been severely criticized by their citizens for doing so. Surprisingly, much of this criticism takes place without any clear articulation of how the conflict impacts Africa. That, surely, should be where the conversation should begin.

Addressing the Security Council on the same conflict, Kenya's Permanent Representative to the United Nations, Martin Kimani, took the philosophical path in an impressive takedown of colonialism and its aftermath in Africa but failed to say much else to define an African interest in the conflict.

According to his newspaper article, Macky Sall and Moussa Faki Mahamat failed, however, to take anything further beyond their official statement that only petered out into a whimper, merely urging "all countries to respect international law and show the same empathy and support to all people fleeing war notwithstanding their racial identity." They could not even utter a minimal offer of assistance or strong advocacy to alleviate the crime of racist exceptionalism, which has emerged as a dimension to the war specifically targeting Africans and persons of African descent.

With increasing global isolation, many African countries continue watching almost completely the military crises contradictions and confrontations between Russia and Ukraine, the multifaceted implications and global reactions. United States and Canada, the European Union bloc, Australia and New Zealand and a number of Asian countries imposed stiff sanctions. In addition, Russia's status is being revoked in many prestigious international organizations.

Many Western companies are suspending their business operations. United States and European Union bloc are taking systematic and well-thought-out measures to destabilize the economy of Russia. On the other hand, United Russia - the largest political party in Russia, which supports President Putin's policies - has proposed to nationalization of the enterprises of those Western companies that refused to operate in the Russian Federation.

As the situation turns scary, Russia has been adopting serious measures, trying to perform a delicate balancing act between saving its economy from collapse and achieving the chosen goal in Ukraine. Putin has also spoken with many world leaders including a few from Africa. Putin had a telephone conversation with President of the Republic of South Africa Cyril Ramaphosa at the South African side’s initiative. The March 10 conversation coincided with the three-decade-old establishment of post-Soviet diplomatic relations.

Both presidents briefly reviewed diplomatic relations between Russia and South Africa and reaffirmed their commitment to further develop the bilateral strategic partnership, noting, in particular, their readiness to expand trade, economic and humanitarian cooperation. He also informed the South African leader about the situation regarding talks with representatives of the Ukrainian authorities. The President of South Africa supported the ongoing political and diplomatic efforts. Vladimir Putin and Cyril Ramaphosa agreed to continue their contacts.

In a similar conversation, President of the Arab Republic of Egypt Abdel Fattah el-Sisi urged for adoption of peaceful and dialogue in resolving the crisis after Putin informed him about the main aspects of the special military operation and its current consequences.

As the current Chair of the African Union and President of the Republic of Senegal, Macky Sall, and the Russian leader reaffirmed that it was important to consistently implement the agreements reached at the first Russia-Africa Summit in Sochi in 2019 and further develop diverse ties between Russia and Africa.

Earlier, the African Union called on Russia and “any other regional or international actor to imperatively respect international law, territorial integrity and national sovereignty of Ukraine” and further urged Russia and Ukraine for an immediate ceasefire and the opening of negotiations with the help of the UN. Senegal, among some African countries, which has strong relations with Western countries abstained in a UN General Assembly vote on Russia against Ukraine.

In a research report, Priyal Singh, Researcher and Gustavo de Carvalho, Senior Researcher at the Peace Operations and Peacebuilding, Institute of Security Studies in Pretoria, South Africa wrote recently that over the past two decades, Russia has aimed to re-establish itself as a world power. A key way to achieve this has been through its permanent membership on the United Nations Security Council (UNSC). But Russia's posturing on several international conflicts has increasingly divided the UNSC, causing a degree of paralysis that hasn't occurred since the Cold War.

At the same time, the researchers noted sharp division among Africans and, certain African members becoming more aligned to Russia's positions on the council, while other are not. In order to understand these dynamics, a recent study commissioned by the South African Institute of International Affairs (SAIIA) and the Institute for Security Studies (ISS) examined voting patterns. The researchers noted that African countries on the UNSC have increasingly relied on collective positions among themselves and those aligned to the African Union (AU).

In conclusion, African policy researchers and politicians interviewed for this article called on all African leaders and governments have to demand for peaceful mechanism and resolution of the crisis within the norms of the international law, as well as emphasizing the need for their strict compliance by both Russia and Ukraine.

Further noting that Russia and Africa almost have convergence or similarity of approaches to many global and regional issues, Russia has to, at least, renounce the existing crisis. African leaders and governments together with the African Union have to move more decisively, step up and commit to working together in a spirit of cooperation voice for definitive peaceful settlement to save human lives and ensure global economic stability rather than embarking on military operation.

Discussions and several interviews with most of the researchers and politicians have firm hopes that African leaders continue their contributions toward achieving and preservation of peace and security, and toward building a more just and equitable system of relations based on the principles of respect for sovereignty, territorial integrity, non-interference in internal affairs of individual countries. The African researchers and politicians finally appreciated efforts, despite the emerging challenges and differences, directed at building on the existing friendly relations, between Russia and Africa.

This article has been read 795 times
COMMENTS