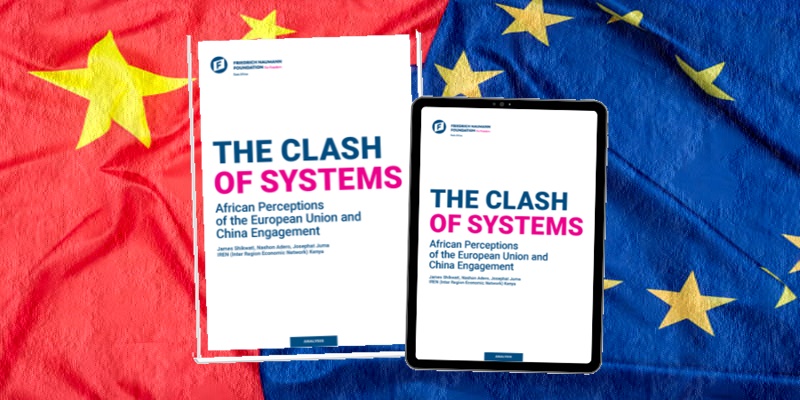 Over the past fifteen years, China has successfully positioned itself as a major trading partner and investor in Africa, displacing Europe as the most important partner in large infrastructure projects and the exploitation of raw materials. This competition by China puts European trade, investment and development policies in Africa to a rocky test. In order to better understand the different strategies of Europe and China and how they are perceived in Africa and further develop recommendations for European and Africa policymakers, the Global Partnership Hub of the Friedrich Naumann Foundation commissioned a Kenyan private think tank, Inter Region Economic Network (IREN), to conduct an independent study and key informant survey involving African policymakers. The results of the online survey have now been presented in a study entitled "The Clash of Systems - African Perception of the European Union and China Engagement".

“The African survey participants hold up a mirror to European policy on Africa and expose Europe’s sometimes still paternalistic and romantic view of Africa.

Europe's belief in the superiority of its own values contrasts with the pragmatic view of Africans on the performance and behaviour of the two partners (the EU and China)," says Stefan Schott, the Friedrich Naumann Foundation in East Africa Project Director. "To put it simply: A road that is completed after a short construction period by the Chinese is also a value in the perception of Africans and more concrete than some European projects to promote democracy, human rights or sustainability."

The survey participants rated China highly especially with regards to quick decision-making. China received a massive approval rating of 75.2% over the European Union at only 55.8%. China was highly rated on timely completion of projects at 81.1% compared to 69.4% for the European Union. Though both China and the EU were perceived as meddlesome in the internal affairs of African partners, China was perceived to be less so at 50.1% compared to the EU at 64.4%. However, China was seen to have fewer scruples with regards to employing corruption as a tool of trade. The survey results showed that 55.2% of the policymakers believe that China uses corruption as a tool compared to 32.5% who think the same of the EU.

The EU, however, retains dominance in many aspects of cooperation where respondents perceive the EU as having an advantage. These include the following: quality of the products or services delivered, working conditions, employing local workers and creating jobs for Africans, upholding environmental standards and better treatment of Africans. The scores were as follows:

China has a commanding competitive advantage when it comes to large construction projects in Africa. Chinese state-owned companies have significantly changed the terrain of the continent with rails, roads, bridges, ports, dams and skyscrapers. This is also reflected in the survey of African policymakers. The statement “China supports the development of infrastructure in Africa” was supported by 85.5% of the respondents. This is an emphatic approval compared to Europe’s 64.2 percent.

The study further recommends that Europeans must redefine their outdated and paternalistic approach to Africa. Africa should no longer be perceived as a recipient of aid, but as a continent of future opportunities.

For the African policymakers, the following are key observations and recommendations emerging from the study:

Policy and partnership options: Africa has options. With multiple suitors, influencers and distributed geopolitical centres of gravity, Africa can optimise on its policy and partner options. Africa states can and should leverage this advantage to optimise the continent’s trade, investment and development co-operation potential Risky trade-offs: While embracing and building on the momentum for development that China has injected into the continent, African policymakers must be careful not to sacrifice the long-term good of the continent for short-term benefits. Of particular concern is the kind of trade, investment and development co-operation contracts procured and the quality of especially the large infrastructural projects undertaken. Policymakers must be cautious about the pitfalls of “bling” projects.

Risk of debt traps: African policymakers must learn from the experience from elsewhere to avoid getting irretrievably enmeshed in debt traps.

The study "The Clash of Systems - African Perception of the European Union and China Engagement" is now available on the Friedrich Naumann Foundation for Freedom website.

The survey of African policymakers took place between October and December 2021. Respondents come from over 25 African countries and 12 countries outside of Africa. The questionnaire was mainly sent to people from academia: journalists, scientists, employees of think tanks, NGOs, business associations and government institutions. More than 1000 people filled out the online questionnaire, which constituted a response rate of 62%.

The Friedrich Naumann Foundation for Freedom

The Friedrich Naumann Foundation (FNF) is a German political foundation that promotes liberal democracy. Founded in 1958, the Foundation is headquartered in Potsdam, and operates globally through its offices in over 60 countries around the world. Currently, FNF’s work is organized around 4 core areas; social market economy, open society, education and international politics.

The Global Partnership Hub is the Foundation's centre of excellence for development cooperation. Based in Nairobi, the Hub works with partners from the Global South to develop innovative approaches to development policy and feeds them into the political discourse.

This article has been read 390 times
COMMENTS