The Economic Significance of Eurasian Union for Africa 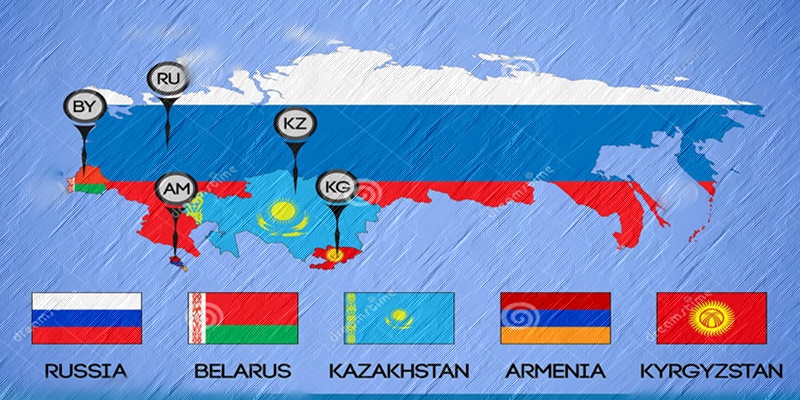 Understandably the African Union, pan-African organization uniting 55 African States, has the legitimate mandate for building external relations with institutions and organizations outside Africa. The AU has established long-term working relations with the European Union and is now seeking to build similar links with the Eurasian Union. It is interesting to examine both the European Union and the Eurasian Union within the global changes in relation to the African Union.

Our key focus here is on the Eurasian Union and the African Union. This article, therefore, explores some historical background and basic definitive facts that aim at deepening readers' understanding of its evolutionary processes, expectations and limitations. Experts discuss, here at length, their views relating to the geopolitical implications of new relations between the African Union and the Eurasian Union, often comparing it to the European Union.

Foreign Minister Sergey Lavrov has held several diplomatic talks with his counterpart, Chairperson of the African Union Commission Moussa Faki Mahamat, over these years. Documents indicate that the question of Eurasian Union-African Union has been on the agenda. For instance, in March 2018 and, even far back before that, in Addis Ababa, Ethiopia, both diplomats discussed this same topic.

"The relations between Russia and the African Union are on the rise and expanding in various areas. But today, we have a perfect opportunity to consider the entire scope of ties between the Russian Federation and the African Union, to see how we can progress in the context of implementing the Sochi summit decisions and preparing for the second summit of the leaders of Russia and African countries," Lavrov stresses.

In the new emerging global economic order, Russia seems to be leading the Eurasian Union, now fast-tracking and stretching all muscles to link up with African Union. The aim is to showcase, Russia's power-muscles and its regional allies to Europe and the world.

Lavrov and Mahamat have agreed to transform the documents approved at the first Russia-Africa Summit into "An Action Plan 2022 - 2025" that will reinforce and determine the necessary directions for partnership with Africa. On its official website, the Russian side expresses a hope for translation into practice of cooperation between the African Union and the Eurasian Economic Commission in accordance with the Memorandum of Understanding signed during the first Russia-Africa Summit in Sochi.

Lavrov has attached importance to establish cooperation between African Union and the Eurasian Economic Union (EAEU), which has until now remained a conceptual thought or a grandiose idea. The EAEU is an economic union comprising countries located in northern Eurasia, founded by Belarus, Kazakhstan and Russia by treaty that entered into force on January 1, 2015. As of May 2018, two republics joined – Armenia and Kyrgyzstan.

Eurasian Union's key objectives include increasing cooperation and economic competitiveness for the member states, and the promotion of stable development in order to raise the standard of living in member states. It was created partly in response to the economic and political influence of the European Union and other Western countries that are desirous to penetrate the former republics of the Soviet Union.

Media reports and official documents show that in November 2011, the presidents of Belarus, Kazakhstan, and Russia signed an agreement setting a target of establishing the Eurasian Economic Union by 2015.  The member states put together a joint commission on fostering closer economic ties. Russia is the most active player among the EAEU, Belarus, Kazakhstan and Tajikistan have some interest in African affairs. Armenia, Kyrgyzstan and Tajikistan have extremely little interest in Africa, according to policy experts interviewed for this article.

Experts say that while the European Union is a practical well-functioning and well-structured organization, and its policies ensure the free movement of people, goods, services and capital within the internal market, the Eurasian Union members are still struggling to deal with their internal issues and most importantly their post-Soviet slippery or thorny relations with Russia. But the question most often asked is, excluding Russia, what the African Union hopes to gain from diplomatic relations with the members of the Eurasian Union.

Professor Fernando Jorge Cardoso, Universidade Autónoma de Lisboa (Autónoma Lisbon University), argues that "the European Union includes giving out national sovereign powers, including on matters of trade and money. I do not see any Eurasian Union doing that - it is not even necessary to go into political arguments to come to this conclusion. The Union speaks about cooperation and economic agreements, and that should be another line of considerations - in any case one does not exclude the other.”

Second, African governments, in general, have shown they are very much pragmatic. They will accept everything coming from everywhere, as far as it pays...so, why choose one partner at the exclusion of another?"

The European Union is simply incomparable to the Eurasian Union, says Dr Mohamed Chtatou, a Senior Professor of Middle Eastern politics at the International University of Rabat (IUR) and Mohammed V University in Rabat, Morocco. According to him, the latter looks like a hocus-pocus business, half-political, and half-kind of military, and as such does not have any economic biting-power in the global world.

Explaining explicitly his point, he says: "The African Union needs major economic investments for the time being. And the economies of its member states are on upward movement, so they badly need capital and transfer of know-how. For the moment, the economic presence of Russia in the African continent is minimal albeit the Russian Wagner group putting political pressure on the countries where they exist. Worse, Russia wants economic concessions but it does not seem to engage in large investment in Africa."

"The European Union is a substantial economic power with a lot of strength and worldwide ramifications. It is also a political power to reckon with. With the Russian war on Ukraine, the Eurasian Union will lose its little credibility and, as a result, will probably go down the drain. Another strength of the European Union is its democracy and strong institutions, which the Eurasian Union countries lack. So one cannot compare the incomparable," concludes Professor Chtatou.

As an economic power, the European Union which consists of 27 members will soon have a larger numerical strength, in future, by three new members - Georgia, Moldova and Ukraine. The European Union has members such as the United Kingdom, Germany, France, The Netherland, Denmark, Sweden et cetera that have played significant contributions to Africa's development compared Eurasian Union members such as Armenia, Belarus and Kyrgyzstan.

Dr. Niklas Swanström, the Director of the Institute for Security and Development Policy, and a Fellow at the Foreign Policy Institute of the Paul H. Nitze School of Advanced International Studies (SAIS) and a Senior Associate Research Fellow at the Italian Institute for International Political Studies (ISPI), argues that the African Union and African leaders have to keep in mind these basic facts: the Eurasian Union lacks the potential to become an economic bloc, partly due to the economic weakness of its members, and rampant corruption but maybe mostly due to the dominant position of Russia.

Dr. Swanström observes that Russia is using the Eurasian Union to influence the member states politically as well as economically, even if its economy is not able to carry the weight. The only solution would be to merge the Eurasian Union into the Belt and Road Initiative, but that would decrease the Russian influence and strengthen China's control over what Russia defines as its sphere of interest.

Dr. Swanström, says further that, Kazakhstan, but also Kyrgyzstan, is concerned about Russian influence, not least after the Russian invasion of Ukraine. There has long been a Russian interest to subjugate the Russian-speaking parts of Kazakhstan and the government in Nur-Sultan ponders how to balance Russia without provoking them too much. The war in Ukraine has made it apparent for all members of the Eurasian Union that they could be the next target for war and territorial annexation.

As a political entity the European Union is represented, for instance, in the World Trade Organization (WTO). European Union member states own an estimated second largest net wealth in the world after the United States (US$105 trillion), equal to around 20 per cent (€60 trillion) of the US$36 trillion (€300 trillion) global wealth.

For now, Eurasian Union-African Union is only at its exploratory stage, it has extremely little potentials. Lavrov emphasizes that the next African leaders' summit planned for Addis Ababa, will see a "memorandum of understanding between the government of the Russian Federation and the African Union on basic principles of relations and co-operation" and a "memorandum of understanding between the Eurasian Economic Commission and the African Union on economic co-operation" signed. (https://www.intellinews.com/russia-preparing-for-second-africa-summit-to-build-closer-ties-as-it-pivots-away-from-the-west-247188/)

European Union members and business investors have been making consistent efforts to capitalize on and explore several emerging opportunities offered by the newly introduced African Continental Free Trade Area (AfCFTA), which provides a unique and valuable access to an integrated African market of 1.3 billion people. In practical reality, it aims at creating a continental market for goods and services, with free movement of business people and investments in Africa.

The European Union in a bid to strengthen further aspects of various issues relating to development in Africa has held a series of business summits. The Eurasian Union has only started exploring around to define what to do with African Union. In its February 17-18, 2022 EU-Africa Summit document, the EU is focusing on the following: Support AfCFTA implementation and the green transition; Improve trade and investment climate between the EU and Africa; Reinforce high level public private dialogue; Enhance long-term dialogue structures between EU and Africa Business Associations.

With its new Global Gateway Strategy, the EU is demonstrating readiness to support massive infrastructural investment in Africa. It also seeks to unlock new business and investment opportunities, including in the areas of manufacturing and agro processing as well as regional and continental value chains development.

In a document entitled "Toward a Comprehensive Strategy with Africa" – the document sets forth what the EU plans to do with Africa. The Joint EU-Africa Strategy takes into cognizance interests such as climate change, global security and the achievement of the United Nations Sustainable Development Goals (SDGs).

Dr Antipas Massawe, retired Lecturer from the University of Dar Es Salaam, Tanzania, observes that the EU is a lot more advanced and successful than the EAEU. The EU’s highly reliable economic alliances and/or involvements in most of the world’s developed and developing democracies makes it the world's more globalized than the mainly regional EAEU. According to Dr Antipas Massawe, the EAEU is landlocked from Africa by the EU, China and other non EAEU world's leading economies that are sea linked to the African continent.

From the above discussions, there are two siginificant points to stress here: The first -African leaders and members of the Eurasian Union have to study how to seek coherent common interests necessary for their strategic goals. Second, for the Russian Federation and the African Union have to move with an integrated commitment in pursuit of realizing the Action Plan for 2022-2025.

The AU is ready to work with Russia in the implementation of the Action plan. At least, Russia and the African Union will now have the finalized "Action Plan for 2022-2025" adopted during the forthcoming second Russia – Africa Summit. This plan will expectedly support Russian and African entrepreneurs in exploring ways of mutual beneficial cooperation and support of peace, security, technology, infrastructural development, agriculture, industrialization, health, education, social and cultural spheres.

The African Union has to lay out, on behalf of African Governments and States, the development priorities, identify existing challenges and possible steps toward achieving common or mutual benefits especially in promising areas of economic, trade and investment, social and cultural partnership between the Russian Federation and the African Union.

This article has been read 471 times
COMMENTS