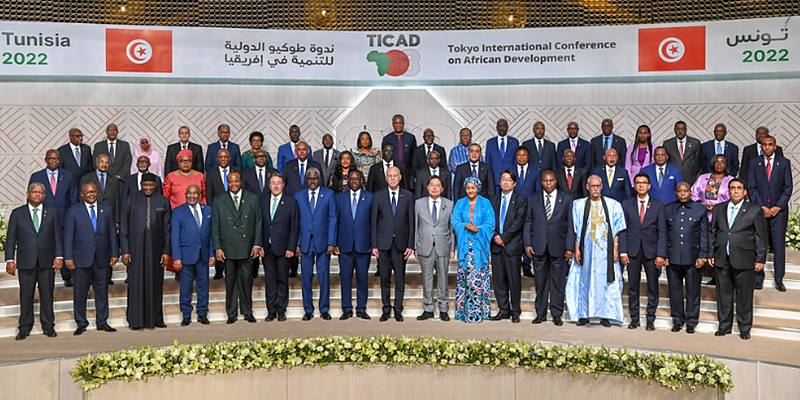 I wish to first and foremost commiserate with the Government of Japan on the very sad event of the assassination of the former Prime Minister, Shinzo Abe. He was a great friend of Africa; and under his leadership TICAD became a much stronger platform for forging strategic partnerships between Japan and Africa. Shinzo Abe pushed for “a free and open Indo-Pacific”.

Japan is a friend of Africa. Over the past 7 years, TICAD has been an excellent forum to discuss how to bolster Africa’s economic development and build stronger partnerships between Japan and Africa. Holding the summit in Tunis further shows that Japan values partnership on the ground, right here in Africa.

While official development assistance by Japan has helped a lot in Africa, the move towards more private sector and investment approach offers lots of opportunities.

In this regard, there’s a lot to be done. Two areas are especially important. First is bilateral trade. Of the $1.5 trillion in global trade by Japan, bilateral trade with Africa was only $23.5 billion or just 1.5%. The Africa Continental Free Trade Area now offers much wider opportunities to change this.

Second is on investments. Foreign direct investment globally by Japan is valued at $2 trillion, of which total FDI stock in Africa accounts for just 0.003%. Japan’s investment stocks in sub-Saharan Africa reached a peak of $12 billion in 2013. However, this declined to $ 6 billion in 2021. These trends must be reversed. And it can be.

Some Japanese companies, such as Toyota Tsusho, are showing the way; its investment in automobile factories in South Africa generated $7.5 billion in revenues in March of 2022. Komatsu, which has business operations in 54 African countries, generated revenue of $ 1 billion.

The African Development Bank is working with Japan on expanding private sector investment opportunities in Africa. Our partnership with the Japan International Cooperation Agency (JICA) on the Enhanced Private Sector Assistance for Africa (EPSA) has helped to deliver over $10 billion in financing that supports Africa’s private sector.

African Development Bank’s partnership with the Japanese Bank for International Cooperation (JBIC), Mizuho Bank and nine other financial institutions provided $2.7 billion to build the Nacala corridor Railway and Port project in Mozambique. Together with TOTAL and other investors and JBIC we also co-financed the $24 billion Liquified Natural Gas project for Mozambique, making it the third largest exporter of liquified natural gas globally, with Japan accounting for 30% of its market.

There are several reasons for Japanese business leaders to focus on Africa. Africa is home to a vibrant fintech ecosystem that is leading the continent’s digital revolution with the highest potential to leapfrogging the world. The continent is home to 576 fintech start-ups and they are run by young people. Last year African fintech companies raised almost $1.5 billion.

Africa is primed to be the alternative source of supply of natural gas to help secure energy supplies to Europe, Japan, and the rest of the world. From Nigeria, to Ghana, Tanzania, Senegal, Algeria, Kenya, Africa now has some of the largest reserves of natural gas in the world.

The future of electric vehicles will depend on availability of lithium-ion. Africa has some of the largest lithium deposits in the world, from Democratic Republic of Congo to Namibia, Zimbabwe, and Mali, enough to make Africa competitive with China and Chile in the race for supplying global value chains for electric cars.

Japan can play a huge role in investments in this area, especially given the leadership of Mitsubishi Corporation on lithium-ion for mobility and power generation.

Africa also holds huge opportunities in agriculture, with 65% of the remaining uncultivated arable land left to feed the world, so what Africa does with agriculture will determine the future of food in the world. And the size of the food and agriculture market in Africa will reach a whopping $ 1 trillion by 2030.

From Democratic Republic of Congo, Morocco, Namibia and Botswana, huge opportunities exist for green hydrogen, the fuel of the future. The African Development Bank is mobilizing $20 billion for developing the Desert to Power in the Sahel, which will power the economies of 11 countries with solar and become the world’s largest solar zone.

I would like to use this opportunity to call for a renewal of the Japan-Africa Energy Partnership signed on July 3, 2017 between the African Development Bank and the Government of Japan – this time, with focus on renewable energy and gas.

Japanese investors should be more excited about Africa. The evidence speaks for itself, but let me amplify the facts: The number of private equity funds in Africa grew from only 12 in 1997 to 150 by 2020.

Africa is a safe and profitable investment destination. In a 2020 survey conducted by the African Private Equity and Venture Capital Association, about 45% of Limited Partners expect returns in Africa to outperform those of emerging markets and developed markets, over the next 10 years. Also, 60% of limited partners plan to increase allocations to Africa in the next three years!

TICAD can help a long way in tilting more Japanese private sector investments to Africa. It is time for Japan to refresh, reengage, and re-invest in Africa. As you do, it is important to base your investment decisions on Africa on facts, not perceptions.

Perception is not reality. Think of the following…In 2020, Moody’s Analytics performed a 10-year cumulative assessment of global infrastructure debt default rates, by region. It found that infrastructure loans perform worse in Eastern Europe, Latin America, and Oceania. Africa was the region with the second lowest cumulative default rate, after the Middle East. That’s proof once again that infrastructure as an asset class in Africa is solid, secure, and profitable.

The Africa Investment Forum, organized annually by the African Development Bank and its partners, is showing the way for investors into Africa: curating deals, closing deals. In three years, the Forum has helped to attract $110 billion of investment interest to Africa. The next Forum will be held in Abidjan, Cote d’Ivoire, from 2-4 November 2022. I will be delighted to welcome you!

This article has been read 387 times
COMMENTS