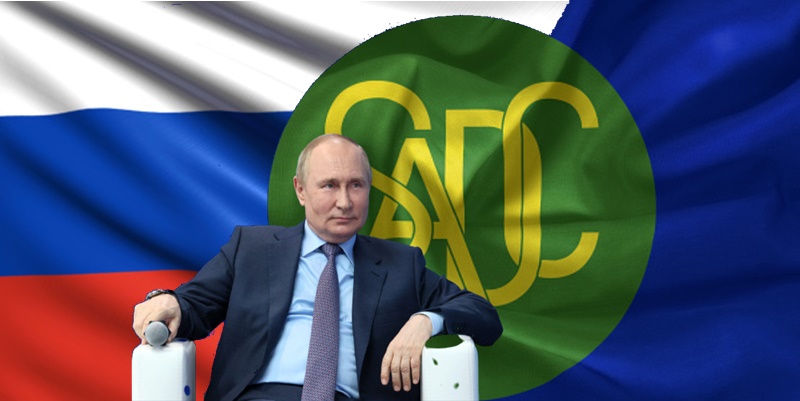 This article attempts to contribute to the discussions on the evolutionary political confrontations and contradictions between Russia and Ukraine, its impact on and implications for Africa. Historically, both Russia and Ukraine attained their independence after the collapse of the Soviet era in 1991. It has embarked on territorial expansionism, annexing neighbouring former Soviet republics. Its annexation ambitions started with Georgia, then Crimea and now Ukraine. That, however, Russia considered itself as a superpower and hopes to lead the emerging new world order.

Russia's "special military operation" approved by the Federation Council and the State Duma (legislative chambers) and that began Feb. 24, has tremendous impact on Africa. It has also pushed the United States, European Union and a few Asia-Pacific states to impose draconian sanctions on Russia.

The Southern African Development Community (SADC) is a regional political-economic organization made up of 16 member states, with a population of approximately 395 million. Russia has the largest territory and has approximately 145 million people. The SADC aims at promoting sustainable social-economic development and improving the living standards of the people in Southern Africa. Despite differences in approach to politics in individual states, the group cooperates on issues of security in the region.

The Russian Federation maintains friendly bilateral relations with all southern African states. Russia supported the struggle for political liberation particularly in Angola, Mozambique, Namibia, South Africa and Zimbabwe. Russia claims to have a common understanding and solidarity with African friends on important issues at international platforms.

Some 17 African countries abstained from the vote at the UN General Assembly to denounce the Russian invasion of Ukraine while some other 28 countries in the continent voted in favour. In the SADC bloc, South Africa, Mozambique, Mauritius, Namibia, Angola, Zimbabwe, Madagascar, Tanzania and Democratic Republic of Congo abstained.

In efforts to reposition itself to become a major partner, the following priorities as an economic strategy in the region were jointly put forward during the Russia-SADC meeting held back in September 2019:

- Creation of a floating nuclear power plant, and South African participation in the international project to build a nuclear enrichment centre in Russia;

- Creation of Russian trade houses for the promotion and maintenance of Russian engineering products (South Africa); and

- Participation of Russian companies in the privatisation of industrial assets, including those created with technical assistance from the former Soviet Union (Angola).

Of course, there are disparities in the level of development and cooperation between Russia and individual states in Southern Africa. At least during the past few years, Russia has notably strengthened relations with most them. For example, it has leveraged unto exploring lucrative platinum project at Darwendale (Zimbabwe).

Foreign Minister Sergey Lavrov launched this $3 billion project back in 2014, after years of negotiations, with the hope of raising its economic profile in Zimbabwe. Few other anticipated projects have sprung up in Angola, DRC, Mozambique, Zambia, Zimbabwe and South Africa.

While Covid-19 impacted on development progress, there are currently signs of the disarray caused by restrictive foreign exchange policies and continuing inability to determine funding sources for Africa. Russia has been engulfed with crisis and worse under serious sanctions, bilateral agreements might take years to realize fully in most Southern African countries.

According to the United Nations Food and Agriculture Organization, many African countries rely on Russia and Ukraine for wheat imports. Russia is a major supplier of fertilizers to 15 African countries. Reuters news agency reported that Africa is suffering from disruptions in food supply and soaring prices of basic goods and risks "disastrous consequences" if the situation endures. This position was supported by African Union Chairman Macky Sall during a conversation with philanthropist Mo Ibrahim at the Ibrahim Governance Forum, far ahead before he travelled to Sochi, Russia. The Sochi trip discussed measures which could alleviate the escalating problems related to the food and agricultural inputs, and further reviewed strategic solutions within the context of Russia-African relations.

Despite the Putin-Sall-Faki meeting, the Russia-Ukraine never-ending crisis is still flushing up commodity prices world-wide. Africa's economy is worsening, a direct primary result of rising energy cost. South African media has reported, during the previous months, about workers protesting against inflationary prices in Angola, Democratic Republic of Congo, Mozambique, South Africa and Zimbabwe. There has been sharp currency fluctuations throughout the southern African region. Southern Africa depends on some imported goods, such as agricultural produce and fertilizers, from Russia and Ukraine. In terms of negotiations, much has to be done in order to reach comprehensive agreements to free movement of these to the Africa's market.

Experts suggest that it is necessary to implement the memorandum between Russia and the UN on exports of Russian agricultural products and fertilizers. Arguably, there are indications that Washington and Brussels anti-Russian sanctions do not apply to foodstuffs and fertilizer.

As African countries face continued uncertainty, the International Monetary Fund (IMF) and the World Bank (WB) interventions should be necessarily seen only as short-term solutions. It is important for African countries to initiate a new reform drive to transform agricuture and industry throughout Africa. African financial institutions, such as the African Development Bank (AfDB), urgently have to prioritize investing more in food production in the continent.  The Feed Africa strategy for Agricultural Transformation in Africa (2016 to 2025) is commendable. to move the continent to the top of export-orientated global value chains where it has comparative advantage. It aims at making Africa a net-exporter rather than importer of basic agricultural products and contributing to eliminating extreme poverty in Africa and ending hunger and malnutrition in Africa by 2025. The AfDB has been strengthening economic resilience and responsiveness to shocks.

The Russia-Ukraine crisis has simultaneously opened doors (opportunities) for Africa. Europe has seen potential supplies of energy especially gas from the region. Leading energy companies such as TotalEnergies, ExxonMobil, Bristish Petroluem (BP), Shell and Eni are already working in the region, seeking alternative supplies in light of the Russia-Ukraine conflict.

Mozambique is increasingly stepping up efforts in the production of liquefied natural gas and consequently become one of the suitable reliable suppliers to Europe. Late July, the outgoing European Union (EU) Ambassador to Mozambique, Sánchez-Benedito Gaspar, argued that natural gas from Cabo Delgado was among the alternatives in Europe’s plan to diversify energy sources in the face of constraints caused by Russia's military operation in Ukraine. According to the diplomat, Europe came to the conclusion that "it cannot trust its old partner (Russia, among the world's biggest gas exporters), which is authoritarian and uses gas as an instrument of war," and is making efforts to secure alternative sources.

A majority of African leaders have in principle endorsed multilateralism, and also reminded respect for territorial sovereignty, independence and human rights. Reference has been made to non-interference into nations internal affairs that brought to the fore the general priniciples on which the Non-Alignment Movement organization was created.

Nearly all the experts contacted for this article have the same arguable points, especially safeguarding and walling (fencing) to be used by key powers as "political playing grounds" the Southern African region. Despite the contradictions, the experts acknowledged the fact that western hegemony and "rule-based order" be halted, and make way for the new emerging world order.

The development of a comprehensive partnership with African countries remains among top priorities of Russia's foreign policy, Russia's Foreign Minister Sergey Lavrov says in an Op-Ed article for the African media, and originally published on the ministry's website late July.

For Russia to regain part of its Soviet-era influence, it has to address its own policy approach, this time shifting towards new paradigms – implementing some of those bilateral agreements. It has to promote development-oriented policies and its strategic efforts have to be more practical, more consistent, more effective and result-oriented with African countries. Russia has to create a new template to bring Asia, Africa and Latin America into its ambit.

African leaders, under the auspices of the African Union, have to design a broad roadmap. Significantly it is necessary to adopt "a collective voice and approach" for the continent. On other hand, a major rethink is urgently required in the current evolutionary processes of the new world order. The first drastic step is for Africans to identify their weaknesses, take stock of their huge natural resources and work together in harmony by pulling their own large-scale resources to fund the development agenda.

Africa should stand up, defend its history and riches and adopt a unified strategy to avoid being used as a pawn in global power games. Specifically, South African Development Community leaders should follow the same line of procedures for the region. In the process of seeking additional support and whatever contributions from foreign partners and foreign investors, either government or private, these have to fall within the roadmap as re-emphasized during the 42nd summit of the South African Development Community.

This article has been read 1,638 times
COMMENTS