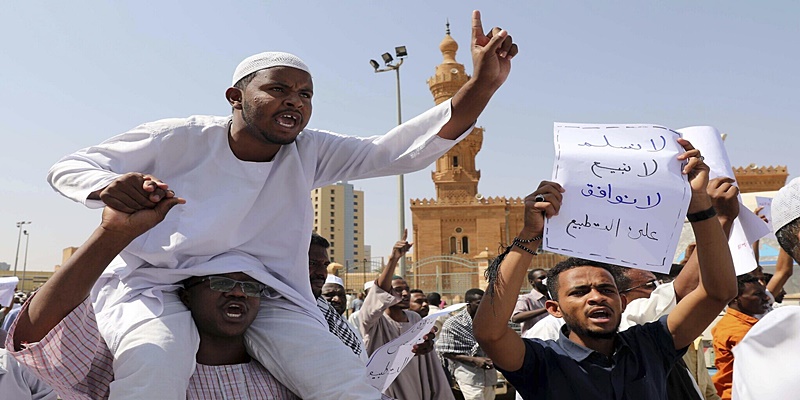 Normalization with Israel could change the “rigid political mentality” in Sudan and pave way for democratic transformation, but the US move was a gift for extremists and hardliners.

In May 2022, the Biden administration withdrew its assistance from the normalization between Sudan and Israel, which was initiated by the Trump administration during US-Sudan negotiations that ended with removing Sudan from the terror list in December 2020. Biden administration’s decision was justified by putting more pressure on the Sudanese military to bring back the civilian-led government.

Things started in October 2021 when the President of the Sovereignty Council and Army Commander, Abd-AlFatah Al-Burhan, dissolved the cabinet then one month later a UN, US, AU, and EU-praised agreement was signed between the civilian Prime Minister Abd-Allah Hamdok and General Al-Burhan. Hamdok returned to his post but resigned in January 2022.

The disputes between the political powers have so far continued with back-and-forth negotiations. Still, confronting radicals at home with greater open involvement in international relations, including normalization with Israel, is recommended so as not to give hardliners enough room to spoil the political atmosphere again and maintain their rigid mentality.

Was Biden’s decision beneficial for Sudan’s democratic transition and for US-Sudan relations? Or was it the exact opposite? Normalization is perhaps the most powerful motivation to break the Sudanese political deadlock and improve US-Sudan relations. In a paradox, Biden turned the remedy into a punishment.

Bringing Sudan closer to the United States in political, economic, and military cooperation means not only an improvement in relations between the two countries but also a country with strong influence in the Eastern and Central regions in Africa (22 African countries) will be able to escape the “Debt Trap” and “Bear’s Grip” and become an ally of the United States.

The first time Khartoum severed relations with Washington was in 1967, who did it and why?

In the 1990s, Washington imposed sanctions on Sudan and placed the sub-Saharan country on the terror list. After two decades, things have started to change, with Washington lifting economic sanctions in October 2017 and removing Sudan from the terrorism list in December 2020, but the expected improvement has yet to materialize. Given the context, it is not surprising that even in the 1970s and 1980s before the tension, Sudan did not become an economic partner of the US, even though the country was incredibly well placed to be the best friend of the US in the heart of Africa.

The first time Khartoum severed diplomatic relations with Washington was in 1967, which was done by voting in a democratic parliament and with the support of the fathers of Sudanese independence. Right, center and left took part in the decision.

True, Sudan was not the only country to sever ties with the US over the Arab-Israeli conflict, but Sudan made the same terrible decision to cut ties with Britain over another similar African problem, a move that affirms the early presence of political stubbornness or “no-compromise mentality”.

In 1967, when US-Sudan relations were severed, national parties were dominating the parliament, the Umma party had 90 members, the Unionist party had 60 members while the Islamists had only four members with no influence on decision-making. The communist party had 9 members but was controlling the labor unions. The tendency to sacrifice Sudanese interests was strongly linked to the political mentality, change had to start there and not elsewhere.

During the official talks and public debate on the Abraham Accord that was signed between the United States and Sudan in January 2021 at the US Embassy in Khartoum, it was the perfect time to confront the radicalism in Sudan, but the Biden administration’s decision to halt the normalization has come as a gift for the radical left of the FFC (alliance came to power after August 2019 military-civilian accord) such as the Baathists, Communists, Nasirists or groups of activists under their influence who are already against normalization with Israel.

The political arena in Sudan was divided on the issue, but the number of people who support political openness in foreign relations began to grow. Islamists were also divided, with some advocating the slogan “Sudan first”, one of the conclusions of which was “Israel has become a reality”, while others sided with the radical left which always thinks “Israel must be defeated one day”.

With the unfortunate decision of the Biden administration, Sudan has again entered the off-season to sell political openness ideas. The American decision reinforces extremism as the hardliners always react to any form of Western intervention; “We told you, they don’t even want us as friends”!

No war with Israel, why the normalization is still important?

Normalization is not to end the war between Sudan and Israel, simply, there is no war. Even in the last two years of the Islamists in power, Sudan has already cut off all relations with Iran and joined the camp against Iran, the Houthis, and Hezbollah, who are Israel’s main enemies. in fact, if the US-Sudan relations are handled properly, normalization will benefit Washington, Tel Aviv, and Khartoum.

For Israel, this will expand the range of peace agreements in the Middle East and Africa, opening up major markets and economic and agricultural partnerships with Sudan, a country of one million square kilometers and six rivers. For the United States and Sudan, radical ideas among Islamists and leftists could be defeated as the soft but deep change in political mentality will happen and then guarantees a strategic security alliance and economic cooperation between the United States and Sudan.

What is the needed and achievable change in Sudan?

Some believe that the real change after the December 2018 revolution in Sudan is the growing awareness of democracy and social freedoms, especially among young Sudanese, and the US administration should maintain military-civilian division and side with civilians no matter who is against or for “free economy” and “political openness in international relations”.

It is true that a great change in the youth has happened but not a new one. Similar changes have taken place in previous generations and Sudanese parties have failed to translate the same achievements into democratic practice and social change. Sudan has gone through three democratic periods and witnessed two public revolutions in October 1964 and April 1985. In all previous eras, Sudan has not changed internally or in its external relations.

Here is the deal, there is a change that breaks this vicious cycle and paves the way for a new political mentality to replace the rigid one. Sudan needs a modernized political mentality that can strengthen the democratic transformation and bring more stability to the new policies of the market economy.

Part of the recipe is normalization with Israel, or rather ongoing and serious Sudanese-Israeli talks leading to normalization that can positively contribute to the democratic transition, better relations with the US, and the integration of Sudan into the global economy.

Will normalization with Israel bring the expected change in one step? No, but it will remove the biggest obstacle in the way of real change. What will happen can be summed up in the slogan “Sudan first” raised by the proponents of normalization, which means that Sudan’s interests are more important than historical issues and ideological constants of both sides Islamists and leftists.

Sudan’s Response to Biden’s Decision and the Way Forward.

During his participation in the UNGA in September 2022 in New York, General Burhan confirmed his willingness to visit Tel Aviv if invited. An informed source previously told the writer that Burhan’s advisers told him to keep the door open and wait for Washington to reconsider its policy and not respond negatively, “they will find out the decision was wrong and the US administration missed the opportunity,” the source said.

Sudan’s real problem was not with the United States or the Western world, it was and still is an internal problem. The rigid mentality was again very apparent when the debate on normalization exploded inside the ruling FFC alliance in April 2020 when Burhan met Netanyahu. The step was opposed even by activists who received support from the US and Western countries during the opposition against the former regime. Those activists and politicians came to power with the blessing of the West, based on the misunderstanding that the rigid mentality in Sudanese politics was only made by radical Islamists, while it is the other way around. The mentality has created radicals on both sides, right and left and the solution lies in political openness and the market economy because this is the direction that brings real change.

In fact, this tension in Sudan’s foreign relations is not only with the US, as there are no stable relations for Sudan with Western countries in general. There is an urgent need to analyze this matter aside from the answers prepared in advance because those who give these answers are the same groups and individuals who make benefit from the tension between Washington and Khartoum, and therefore they prefer to mislead US political community by reducing all causes to a specific party rather than changing the entire political mentality including their portion.

Sudan has been ruled by all parties right, left, and center, and is now stuck in this situation; near to America and still far away, there are reasons to improve relations with the US and to enter into an economic partnership, again nothing happens. This situation needs a real explanation of what is happening in Sudan’s foreign relations in general and in relations with the United States in particular.

The main obstacle hampering Sudan’s relations with the United States and the Western world, in general, is the strong tendency of Sudanese political elites to enforce what they think are ethical principles and positions at the expense of national interests and economic cooperation with the West.

From the US side, the level of understanding of the real problem in Sudan is always less than needed. The US administration needs to revisit its policy on Sudan.

The most important issues in Sudan for the US decision-makers should be the progress in the free economy policies and the real change in the Sudanese political mentality. Human rights issues are at the top of the list for sure, but the required change has not happened, the reason for this is the rigidity of political elites, including human rights activists who are allied with Western organizations.

The Sudanese Center for Think Tanks and Strategic Studies (SCTTSS)

This article has been read 299 times
COMMENTS