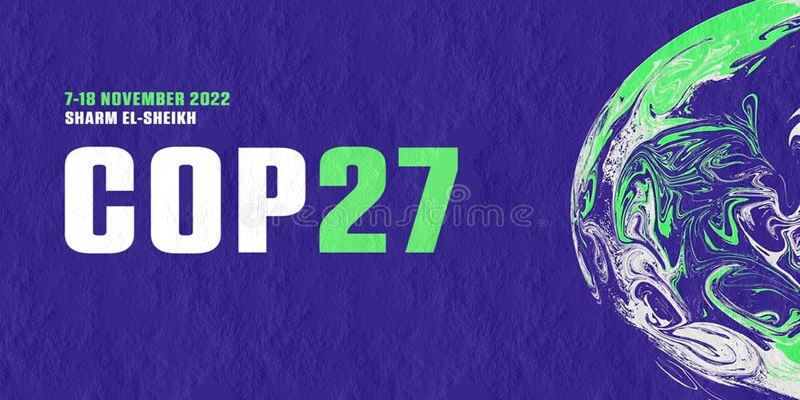 In just under a month, thousands of delegates will descend on Sharm El-Sheikh for another round of climate talks as Africa gets to play host to the conference of the parties (COP) for the fifth time since these meetings were first held in 1995 in Berlin. COP is the supreme decision making body of the United Nations Framework Convention on Climate Change (UNFCCC), making COP meetings the most important global discourse on #climatechange aimed at securing global consensus on #climateaction.

#cop27 couldn't have come at a more challenging time. An unjust war rages on, resulting in a humanitarian crisis of untold suffering, misery and death to the ordinary people of Ukraine and Russia. A war that like many others, is a stain on humanity and casts a dark cloud on our ability to respond to an even greater threat of climate change. This coupled with sluggish post-COVID19 recovery has further weakened already fragile economies with global growth projections for 2022 and 2023 already revised downwards. Sri Lanka's economy collapsed, Lebanon is in trouble as people are unable to access their own hard earned savings and have resorted to robbing their own banks. China's zero COVID policy continues to affect production and value chains, which has global knock-on effects. This is exacerbated by the real estate crisis at home and a trade war with the US. The US, UK and Europe on the other hand are grappling with an energy crisis, high inflation and subsequent high cost of living.

These glaring challenges are even before we focus on the climate challenge evidenced by the devastating effects of increasing extreme weather events. Extreme heat waves in Europe and North America, heavy rainfall resulting in deluges and landslides in Africa, North America, South America and Asia as was the case in Pakistan, a third of which was flooded and other cases in Venezuela and Uganda.  There is clear evidence of glaciers melting faster. Increasing threat to biodiversity as the world's forest cover is destroyed in the common capitalist fashion espoused by large multinational corporations. As a result, extreme droughts have ravaged many parts of Africa, entire eco-systems have been destroyed, waters sources and water ways are drying up in Europe, North America and China undermining water security and trade. Subsequently, agricultural production and yields have fallen greatly leading to greater food insecurity in many parts of the world. A combination of geopolitical, economic and climate crises is a recipe for global catastrophe, which can be averted with the right concrete actions.

The above backdrop sets the stage for #cop27. Perhaps it's important to consider why spotlighting COP's own carbon footprint matters. If you are a financial coach, it would be ironic for you to be financially indiscipline. The same logic can be applied to the host of the world's foremost conference on climate action. As such, the spotlight is on Egypt not just to host but to demonstrate its own commitment to the climate agenda. Egypt promises a carbon neutral conference, to walk the talk and demonstrate ambition and commitment to #climateaction.

So what does Egypt's commitment look like? A conference powered by renewable energy hence construction of three solar power plants, achieving energy efficiency at conference venues and sites, e-mobility for transportation with about 260 electric and natural gas buses for delegates, efficient and sustainable water and waste management as well as various supply chains. Hotels have received green certification and procurement, construction as well as packaging all have environmental and sustainability considerations.  Now this all sounds good however it will certainly be important to have a monitoring mechanism over this period to objectively determine the carbon neutrality/impact of the conference and avoid green washing. This is particularly important in view of #cop26 which turned out to be the COP with the highest emissions at 131,556 tCO2e, close to triple the emissions of #cop25 at 51,101 tCO2e. #cop27 can therefore contribute to a significant upward trend by surpassing #cop26 or demonstrate progress in climate action over the one year.

The sticky one is aviation emissions, which make up the bulk of emissions given the hundreds of flights (including private jets) that will bring in majority of possibly over 40,000 delegates if the number of delegates exceeds that of #cop26. Emissions from travel grew sharply from a total of 43,192 tCO2e for #cop25 to #cop26's 103,955 tCO2e. For in-depth information and analysis of COP's sustainability, #cop26's sustainability report will be a good read (https://ukcop26.org/cop26-sustainability-report/).

The obvious alternative would be to push for an entirely or largely virtual COP. However, like any other country, Egypt has vested economic interests in people physically participating in a massive event of this nature. Such significant economic benefits for both the short and medium term are not easy to trade-off and Egypt is no exception. As such, carbon offsetting will be an important consideration to truly achieve carbon neutrality. Ultimately, whether Egypt delivers on this promise is left to be seen particularly in light of #cop26's record emissions.  The question is whether #cop27 will go ahead to surpass #cop26 and further deepen the contradictions of an already nuanced climate discourse.

Beyond cop27, Egypt has bagged itself a unique opportunity for climate leadership. The world is now wide awake to the realities of climate change and climate action at all levels is no longer peripheral. As such, Egypt can take advantage to lead the charge on the African continent particularly in regard to scaling adaptation efforts. What does this look like? A unique opportunity to hub continental climate action. The first and certainly most important is to lead in implementation. Egypt shouldn't cut back on what it has demonstrated in preparing for #cop27 but should instead draw from the energy of the conference to radically scale its efforts and provide real leadership on the continent of the possibilities. As such, the electric and natural gas buses should be fully integrated into Egypt's public transport system and the energy mix should continue to show the transition to renewables, consistent with or even stretching its 2035 goal of 42%. Innovation for climate adaptation needs a hub and Egypt can offer that, a physical and virtual space for brilliant young minds across the continent to collaboratively design, develop, pilot and deploy climate solutions. Egypt can have a front row seat to climate technological innovation and even benefit from some intellectual property.  It follows that Egypt has the opportunity to be at the center of mobilization of climate finance to support the development and scaling of adaptation efforts for the African continent. Being host positions Egypt to take the lead in shaping Africa's net-zero path.

This article has been read 355 times
COMMENTS