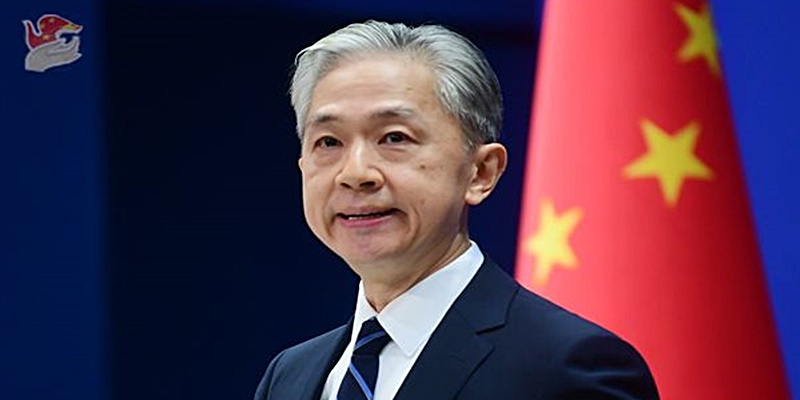 CCTV: Economic globalization has encountered headwinds in recent years, and the World Openness Index continues to decline. Some countries have been calling for decoupling and breaking industrial and supply chains. In the meantime, China has repeatedly stressed that its door will only open wider and will never be closed. The achievements of China’s high-level opening-up have gained recognition from the international media. How does China view this?

Wang Wenbin: Opening-up is China’s fundamental national policy, and also the hallmark of contemporary China. President Xi Jinping stressed that “Openness enables a country to move forward, while seclusion holds it back”. Since the 18th CPC National Congress, China has firmly adhered to a win-win strategy of opening-up, and formed a new pattern of all-round opening-up in various fields and sectors.

Over the past decade, despite headwinds against economic globalization, China’s opening-up has still gained sound momentum. China’s foreign trade has increased from $4.4 trillion to $6.9 trillion, becoming a major trading partner of more than 140 countries and regions and the world’s largest trading country. China’s annual FDI in actual use has hit 1.15 trillion yuan, up from 700 billion yuan, ranking second globally for five consecutive years since 2017. The capital stock of China’s FDI abroad has soared from less than $0.6 trillion to over $2.7 trillion, ranking third in the world.

Over the past decade, China, despite rising unilateralism and protectionism in the world, has never stopped its efforts to build a new system of an open economy at a higher level. China has established 21 free trade pilot zones as a result of high-level institutional opening-up. The Hainan free trade port has witnessed a good start. The negative list for foreign investment in pilot free trade zones has been shortened by more than 85% from 190 items to 27. China has signed 9 more free trade agreements, bringing the total number to 19. The Regional Comprehensive Strategic Partnership (RCEP) that came into effect on January 1 this year is the largest free trade zone in the world.

Over the past decade, a more open China has shared its development opportunities with other countries, and China’s market has become a  market for the world, a market shared by all, and a market accessible to all. China has taken initiatives to lower its tariffs on goods, and its overall tariff level has been slashed to 7.4%, even lower than the 9.8% commitment made upon accession to WTO. Besides, China has granted zero-tariff treatment on 98% of taxable items originating in 16 Least Developed Countries. We have held the China International Import Expo (CIIE), the world’s first import expo held at the national level, with deals worth a total of $272.27 billion over the past four CIIEs. More and more multinational companies regard China as an important investment destination and believe that to invest in China is to invest in the future.

The current international situation is unstable and volatile, with rising uncertainties in global economic recovery. However, the Chinese economy’s strong resilience, enormous potential, and the fundamentals sustaining long-term sound development will stay unchanged, and China’s resolve to advance a high-level opening-up and build a market-oriented and law-based international business environment will stay unchanged. In the future, China will stay committed to the fundamental national policy of opening-up, and firmly follow a win-win strategy of opening-up. We will continue to promote trade and investment liberalization and facilitation and expand opening-up based on institutions, rules, regulations, management and standards, to share the fruits of China’s development, provide more development opportunities for other countries, and create larger space for win-win cooperation between China and the world.

Shenzhen TV: WHO said on October 19 that it is too early to lift the highest-level alert for the COVID crisis, with the pandemic remaining a Public Health Emergency of International Concern (PHEIC) despite recent progress. Do you have any comment?

Wang Wenbin: We noted relevant reports. The Chinese side has been closely following the developments regarding the COVID-19 pandemic. The COVID metrics remain elevated and the constant mutation of the virus points to great uncertainties. The COVID-19 pandemic is not over yet.

WHO in recent days urged countries to keep doing what is working and warned against letting down guard. It called for stronger effort to step up test services to track mutations of the virus and boost vaccination, put in place effective public health measures including those propping up personal protection so that we are in a better position to end the COVID-19 pandemic.

The Chinese government is always guided by a people-first, life-first philosophy. On COVID, it follows the approach of preventing imported cases and resurgence at home and a dynamic zero-COVID policy. We work hard to contain the pandemic and ensure economic development at the same time, adjust our prevention and control protocols based on the changing conditions, and pursue science-based and precision-oriented measures to protect people’s life, health and safety. We have every confidence in winning this hard battle and making greater contributions to global solidarity against the virus.

The Paper: It is reported that according to South African President Cyril Ramaphosa, the Crown Prince of Saudi Arabia expressed the desire to join BRICS. What is China’s comment?

Wang Wenbin: BRICS came into being in the wake of the arrival of an era of major development, transformation and adjustment. For 16 years since its inception, it has delivered fruitful outcomes, making important contributions to the cause of world peace and development. That is why BRICS has gained extensive recognition and support from the international community. More and more countries want to be a member of BRICS, make joint efforts to overcome difficulties and challenges, and realize common development and prosperity.

As the BRICS chair for this year, China has actively supported the BRICS in starting the membership expansion process and advanced the “BRICS Plus” cooperation. The 14th BRICS Summit was successfully held in June this year. President Xi Jinping noted at the meeting that BRICS countries gather not in a closed club or an exclusive circle, but a big family of mutual support and a partnership for win-win cooperation. At the summit, BRICS leaders reached important common understandings about BRICS expansion and expressed support for discussion on the standards and procedures of the expansion. This has been well received in the international community and many countries have expressed interest in joining the BRICS. China supports and welcomes this. Going forward, China will work with fellow BRICS members to steadily proceed with the BRICS expansion process and enable more partners to join this promising endeavor.

CCTV: Since the 18th National Congress of the CPC, China has made remarkable achievements in ecological conservation and made important contribution to promoting global climate governance. Due to the energy crisis, many European countries have recently delayed coal exit and emissions reduction plans. Under such circumstances, will China still commit itself to green and low-carbon transformation?

Wang Wenbin: Since the 18th National Congress of the CPC, under the guidance of Xi Jinping Thought on Ecological Civilization, China’s ecological and environmental protection has seen historical, transformative and comprehensive change. People are in action to build a beautiful China across the entire society. The philosophy that clean waters and green mountains are just as valuable as gold and silver has taken roots in the hearts of the people. China has made phenomenal achievements in energy conservation, carbon reduction and emissions cut.

China has set targets for carbon peaking and carbon neutrality and will achieve the largest reduction in carbon intensity the world has ever seen and move from carbon peaking to carbon neutrality within the shortest time in world history. In the past decade, green development has become a defining feature of China’s high-quality economic and social development. The share of coal in China’s energy mix has registered the fastest drop in history to 56%. Non-fossil fuel accounted for 16.6% of all energy consumption in China. China’s installed capacity of renewable energy accounts for more than one third of the world’s total, exceeding one billion kilowatt. China ranks first in the world in terms of the installed capacity of wind power, solar power, hydro power and biomass. China’s forest area has grown to 227 million hectares, making it the world’s leading force for greening our planet. China has supported its 6.5% average economic growth with an average annual growth of 3% in energy consumption.

Currently, global climate governance is facing challenges posed by the COVID-19 pandemic, sluggish economy, and energy and food crises. Some countries are rolling back their climate policies. We hope they will overcome the difficulties as soon as possible, return to the right track of low-carbon and green development and jointly strive to achieve the goals of the Paris Agreement. China is firmly committed to green, low-carbon and sustainable development. We will accelerate the green transformation of our development model, promote harmonious coexistence between humanity and Nature, take an active part in global climate governance, and make new, greater contribution to building a beautiful China and a beautiful world.

This article has been read 443 times
COMMENTS