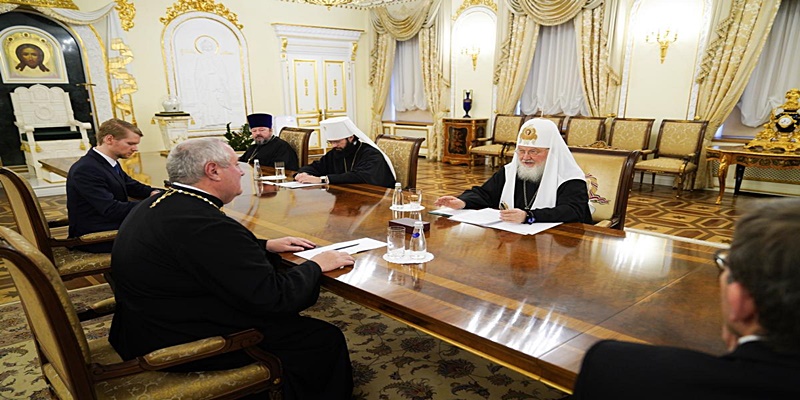 Patriarch Kirill of Moscow and All Russia and a WCC delegation led by the acting general secretary Fr Ioan Sauca met on 17 October in Moscow, discussing the current situation with the war in Russia and Ukraine and in light of the danger of nuclear war.

Q: Why did you visit Moscow?

The visit took place on request from the WCC central committee and is part of a series of visits that has already included the Middle East, Lebanon, Syria, Palestine, Israel, Ukraine, and now Russia, meant to build bridges of peace and reconciliation through encounters and dialogues and to avoid military conflicts, wars and violence.

The programme also included a visit to the Moscow Church Centre for Assistance to Refugees, and discussions with representatives from the Moscow Theological Academy.

We went there on the request of the central committee to try to start a dialogue on the theology of war. Other voices asked for an emergency visit in light of the danger of nuclear conflagration. (See text in the document  His Holiness Patriarch Kirill, WCC acting general secretary meet in Moscow, agreeing that war cannot be holy | World Council of Churches (oikoumene.org) (https://www.oikoumene.org/news/his-holiness-patriarch-kirill-wcc-acting-general-secretary-meet-in-moscow-agreeing-that-war-cannot-be-holy)

Q: What was the first reaction of Patriarch Kirill?

We met for several hours, and we had time for in-depth discussion. I had also a private audience with the Patriarch. I reported on the outcome of the WCC 11th Assembly in August-September, the statement on the war in Ukraine and the latest WCC central committee in June. Noting was avoided or hidden; we were clear with what we said in our statements and we were bold in our presentation. In the Russian delegation were present members of the WCC central committee who participated at the elaboration of the statement in June and those present at the WCC 11th Assembly who were members of the drafting committee which elaborated the statement on the war in Ukraine. Everything discussed in the meeting is not included in the report due to circumstances with local laws and the urgent need to continue the dialogue. We understand how to be sensitive to the situation in which the churches live and, while saying the full truth, we make sure we do not do more harm.

Patriarch Kirill said that the war is not done by the churches but by the politicians. And the churches' role is to be peacemakers, as we have noted in the report.

I went further with two questions which are not in our statements but voiced by some of our member churches:

1) What is his theological position on the war in Ukraine since there is a perception that he supports it as a "holy war?”

2) What is his explanation of using the term “metaphysical war” in relation to the war in Ukraine?

We have received his response, as mentioned in the report.

In conclusion: we did our job; we visited and spoke with Patriarch Kirill; we initiated a dialogue and saw the wish from the Russian side to continue the dialogue. In my opinion, we accomplished the mandate given by the central committee.

Q: Why were there only men in the WCC delegation?

We went there with a small delegation, as this was not a normal church visit and there is war. We have different ways of handling the ecumenical and diplomatic protocol and this time it was a meeting between Patriarch Kirill and the acting general secretary, as you can read in the press release of  17 October.  WCC acting general secretary visits Moscow | World Council of Churches (oikoumene.org) (https://www.oikoumene.org/news/wcc-acting-general-secretary-visits-moscow)

I was joined by Rev. Dr Benjamin Simon, WCC programme executive for Church Relations and accompanied by Fr Mikhail Gundiaev, the Russian Orthodox Church’s representative to the WCC. They were present due to their functions, not gender.  I have always tried to have a balanced leadership in delegations but due to the special circumstances with the war the functions were this time the main focus, and I tried to keep the group small to establish dialogue as requested from the central committee. I knew that some reactions would come. In the WCC’s highest staff leadership group, we are three women and three men.

The Russian Orthodox Church decided upon the gender and people attending from its delegation.

Q: What will happen after the visit?

We will continue to monitor and pray about the situation and continue the dialogue. We are operating through four foci: church relations, peacebuilding, statements, and communication.

The staff person responsible for Church Relations will continue the follow up on church dialogue and will prepare the visits in relation to the request on the Church in Ukraine to become a member of WCC. Rev. Dr Benjamin Simon, as a professor in Bossey, was also entrusted to make sure that recruitment of Russian students to study in Bossey will continue.

Q: What do you say to those who say you did not speak up strongly enough against the war? Some people say that other global religious leaders have publicly used language more critical of the war than you have.

Since the Russian invasion of Ukraine began, the WCC  began making statements in February 2022, then by the WCC central committee in June, and by the WCC 11th Assembly in September. We made clear the position of the WCC regarding the humanitarian tragedy unfolding because of this war, naming it clearly an invasion, and aggression. It was nothing new or hidden: personally, I wrote about it to Patriarch Kirill and to Russian president Putin. Our correspondence has been documented at the following links:

The WCC position is clear and that was not avoided but clearly stated when we met the Patriarch Kirill. In addition, the Russian members of the WCC central committee and those who were present at the WCC 11th Assembly were also present during the meeting with the patriarch. There was no reason to hide or dilute words or concepts when those were used in our statements and in our earlier correspondence with the patriarch. I can understand the use of the hermeneutic of suspicion by some critical voices, but here is not the case. We went there to have an open and truthful dialogue, and that is in fact what occurred.

I hope and pray that the fellowship of churches continues to and work towards just peace and towards the end of the war in Ukraine and the end of wars elsewhere in the world. I also pray that the WCC continues to be that open table which gathers Christians together and gives courage and patience to listen to one another even if we disagree. May we remain eager and committed to look together to building bridges of justice, peace, reconciliation and unity.

WCC director of communication, based in Geneva, Switzerland.

This article has been read 232 times
COMMENTS