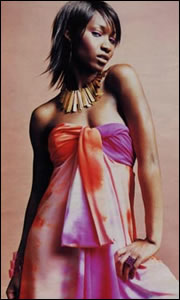 While tutoring at a modeling agency, I remember giving young ladies ‘How to..’ instructions for a zero-sized body. Zero size refers to a body featuring 34” bust; 24” waist and 34” hip. Although different modeling agencies have different sizing requirements, this is a standard figure that gives guidelines worldwide. Apart from the zero size scale, judges also evaluate the model’s intelligence; poise, catwalk skills and style.

The rest of us have however assumed that zero-size is the benchmark for glamour. We will do anything to achieve the figure. We have influenced the advertising industry to swear by the same rules and no beauty product or cosmetic sells without a zero-sized model’s picture, caption or illustration on its packaging. Mannequins in fashion stores are not left behind either. As much as the majority population doesn't resemble them, we want to dress and look exactly like those lifeless ‘people.’

Take a walk down the street, around a college campus, or in the local mall and you’ll see people of all shape, height, and weight. No one looks exactly like the other; therefore I cannot buy a similar dress to yours and expect to look as good as you look. A slight orientation of my shoulder, waist or bust will completely change the way the dress appears on me. You cannot dress for the body you want rather than the body you actually have. The results will tell it all: the distorted images we see all round us are not of ignorant people. They are of knowledgeable people who are busy trying to ape others.

Perhaps, time has come to stand up for the ‘plus-sized’ population. By using spaghetti-thin models to advertise clothing choices, we are sending the wrong message that thin is the only way. With a sizeable number of an above-average sized population, only an insensitive designer would want to insist on zero-sized items.

Our intelligence should never allow us to put our health at risk in trying to fit into a tiny item that can only fit people half our size, all in the name of a fashion wave. The ensuing  health hazards may be fatal. Some have even gone ahead to take surgical procedures in a quest to achieve the model figure.

One of the reasons so many people are unhappy with their bodies is the difference between the person they see in the mirror and what they thought they looked like. Besides, the scarcity of all sizes of fancy clothing that usually comes in model figure sizes frustrates the ‘un-sized,’ forcing them to go for something they think is closer to their size. Eventually, they end up in distorted images just because they did not obey their sizes and instead pledged allegiance to the fashion wave.

As Carol Gioia, a renowned image writer puts it, “When we begin to obey our sizes, the impact on all society could be immeasurable, the entertainment, media and advertising industries would soon follow suit and put their prejudice aside in an effort to compete in the arena of political correctness. Soon we would see plus sized persons represented equally, not merely in a token capacity, in all segments of society, and we could confidently say, one more issue of discrimination has been put to rest.”

This article has been read 11,382 times
COMMENTS