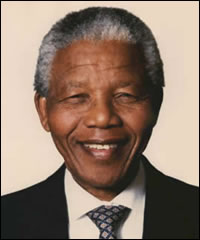 Africa's statesmen are doing the continent proud. In South Africa, Nelson Mandela's contribution to good governance and democratic ideals will be immortalized by Historians. His grace and forceful presence made the World Cup team take note and as a result, the soccer premier show will come to Africa next year. To Nelson Mandela we say: thank you papa.

In Mozambique, Joachim Chissano is doing Africa proud. After relinquishing power in a peaceful transition, Chissano has been on the trail to all the hot spots in Africa. He even came to Kenya last January at the height of our own conflicts. His presence and that of his peers was a welcome relief to people who care. We took note that we have such responsible leaders in Africa, people who mean well for our continent.

In Botswana, Katumire Masire leads by example. He is among the breed of African leaders emerging to fight for good governance to adherence to the tenets of democracy in Africa. His involvement in the economic gains in Botswana made him win the respected Ibrahim Mo Award of Excellence amongst other African leaders. He has been to all the hot spots in Africa preaching peace and national healing

In Zambia, even though Kenneth Kaunda had to suffer the ignominy of poor leadership, he has risen to the top and adds his voice to those of reason in African issues. He is a welcome addition to past African leaders leading from the front.

Across the border in Tanzania, Benjamin Mkapa has been very active in finding solutions to a host of nations in conflict. How I wish his predecessor also came out, for Mwinyi must still be alive.  Mkapa is doing Africa proud by keeping himself busy with conflict resolutions in Africa.

Yonder in Nigeria, Olusegun Obasanjo has actively joined his peers in search of solutions to the conflicts in Africa.

All that these leaders share in common is simple; they are making Africa proud by playing in the premier league of African body politic. They have come above their countries to look at Africa as the theatre of their play. In their respective countries of origin, they have assumed immense status that does not allow them to play anymore in the lower leagues, what in Kenya could be defined as tribal politics.

How I wish that we could also produce such a statesman from Kenya. They shine in what someone once derogatively called the "Dark Continent." Their efforts will soon bear fruit and African conflicts in places like Darfur, Somalia and DRC will be solved. The next level of play will be to enhance the rule of law. And to this extent, we must congratulate the people of Ghana for having the kind of resilience that they displayed when their election was becoming too close to call. You have done Africa proud and we must now walk tall in the firm knowledge that in Africa, elections can also be won, not rigged.

This article has been read 11,378 times
COMMENTS