BRICS and the Establishment of a Global Socio-Cultural Architecture 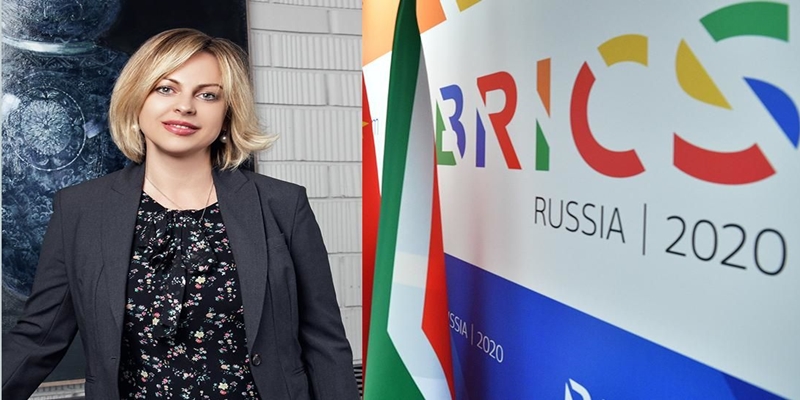 Several reports have already appeared on aspects of cultural dimensions of BRICS (Brazil, Russia, India, China and South Africa). Admittedly, BRICS has broadened its scope of operations and activities, indicating its strength and the level of its development. As already known, Russia has passed on the BRICS Chairmanship to India, which officially starts January 2021. Kester Kenn Klomegah from Modern Diplomacy contacted to know a few more detailed developments in the cultural directions of BRICS.

Elena Marinina, Co-Chair of the International Cultural Exchange Group of the BRICS Civil Forum, Deputy CEO of the Roscongress Foundation and Director of the Innosocium Foundation, discusses the question of cultural diversities among BRICS members, the various initiatives that were adopted during the last interactive working session, and combined efforts to pave the way forward with the Association of NGOs as part of BRICS. Here are the interview excerpts:

Q: How do you assess the importance and the results of the online roundtable discussions on “International Cultural Cooperation for Strengthening BRICS Unity” moderated from Moscow?

Marinina: A lot of serious preparatory work went into the roundtable at the BRICS Civil Forum. The International Cultural Exchange Working Group collected recommendations and initiatives from representatives of various public organizations and institutions, foundations, and socially oriented businesses of the five BRICS countries. All of these recommendations and initiatives were presented during the roundtable, given a serious and balanced assessment.

Cultural exchanges, protecting the cultural heritage of our countries, getting young people involved in the culture of BRICS countries, and developing tourism are the priority focuses that formed the basis of our draft communiqué that was presented to the heads of state at the BRICS Summit under the presidency of the Russian Federation. All the members of the working group, which included more than 30 representatives of the alliance’s member states, agreed that we should join efforts to develop sustainable cultural cooperation between BRICS countries.

It is crucial that all the recommendations are very clear, whether it is the establishment of the BRICS Advanced Thinking and Research Centre or an internship programme for the different activities of young professionals, holding the annual BRICS Literature Fair, or the creation of a general register of cultural, architectural, and landscape monuments of BRICS member states with their subsequent inclusion in the World Heritage List. In other words, we not only outlined paths for further cultural cooperation between our countries, but also identified specific projects that will establish this cooperation.

We must also keep in mind that many of the projects that have been announced overlap with the competencies of other working groups, which once again demonstrates the diversity and breadth of the coverage of such a phenomenon as culture. Along with the economy, culture is the foundation on which countries build relations.

Q: In your opinion as a member of the BRICS Working Group on Culture, do you agree that there are some diversities in culture among the group? Russia, India and China are geographically close, Brazil and South Africa a bit distant – does this present any challenges in realizing the expected tourism and cultural dimension of BRICS?

Marinina: The vision of man and the world is truly distinct for different nations, and sometimes even the exact opposite in some ways. Talking about culture, uniformity is unacceptable even within a single country. The main thing that unites the representatives of BRICS countries, though, is the desire to speak from a unified position on the global development of civil society and the establishment of a global socio-cultural architecture. In this regard, the diversity of the cultural codes of BRICS is more of a unique advantage than a disadvantage. We understand this very well in Russia. As a multinational, multicultural, and multilingual country, Russia is always open to dialogue with other peoples. We see the same approach from our foreign partners.

We are already actively collaborating with representatives of BRICS member countries as part of the events of the Roscongress Foundation’s social platform – the Innosocium Foundation. For example, we recently launched the BRICS Women’s Business Alliance, whose agenda not only covers economic issues, but also cross-cultural exchange and the implementation of joint projects in creative industries and education. The upcoming Eurasian Women’s Forum, which will be held in September 2021 in St. Petersburg will feature a discussion platform on women’s involvement in the creative economy. As the organizers of Russian Creativity Week, we are also looking forward to seeing creative representatives from BRICS countries at our event in Moscow in summer 2021.

As for tourism, the deterrent today is not so much the geographical position of countries as it is the closure of borders due to the pandemic. However, this is a temporary factor. The final recommendations of the International Cultural Exchange Working Group are designed for a longer horizon and contain a wide range of measures that aim to develop the tourism potential of BRICS countries. This primarily includes the BRICS Cultural Tourism project, which seeks to consider the possibility of direct communication between BRICS nations, simplify the visa procedure for citizens of BRICS countries, open guide schools, and develop tourism routes in the group’s countries. We are also planning to hold the annual five-nation ‘BRICS – Our Common Home’ Cultural Festival, the ‘Great BRICS Cities’ project, various championships, and several other interesting initiatives.

One thing I am definitely certain of is that with all the differences in lifestyle, mentality, and traditions, as we travel or communicate and learn about the culture of another country, we are building a policy of intercultural relations and erecting a big BRICS house brick by brick, where common moral values will shape its foundation.

Q: Could you discuss some of the initiatives that were presented during the meeting? What initiatives presented by Russia, the Chair of BRICS 2020? What were the reactions of your colleagues from Brazil, India, China and South Africa?

Marinina: First of all, I would like to remind you that the BRICS Civil Forum itself was launched in 2015 based on an initiative put forward during the Russian presidency in order to convey the priorities of society and present civil initiatives to the leaders of the five countries. Over the past years, this format has proven to be useful and effective for cooperation between the public organizations of the association’s countries.

The 2020 BRICS Civil Forum came up with public initiatives for healthcare during the pandemic as well as social equality and addressed issues concerning the environment and climate change, the development of green energy, civil rights and freedoms, in addition to the role of education and science in human development. As I already mentioned, we devoted great attention to getting young people involved in the culture of BRICS countries, developing cultural exchanges through literature and art, and protecting cultural heritage as the basis for international cooperation and tourism.

In addition, as part of the cultural focus of the BRICS Civil Forum, Russia presented a number of projects dedicated to the 75th anniversary of victory in World War II. These projects include an initiative to establish the ‘World Day of War Veterans’ under a UN resolution, the international project ‘Libraries as Witnesses of the Great Victory’ based on the materials of the national libraries and archives of BRICS countries, and the five-nation literary and historical project ‘BRICS Peoples: Dedicated to War Heroes.’

All these initiatives were included in the final recommendations and not only garnered broad support from our colleagues in BRICS, but also from participants who were invited from other countries in Europe and Asia. We had a comprehensive exchange of views and engaged in fruitful and interesting work.

Taking advantage of this opportunity, we also invited the working group members to the second Russian Creativity Week Festival and Forum in Moscow in summer 2021, which the Innosocium Foundation is organizing jointly with the Russian Cultural Centre. The event was held for the first time in September 2020 and immediately received international recognition, as evidenced both by the scale of foreign participants as well as their active involvement in the event’s programme.

Q: Now judging from the discussion, what could be the best way to systematize and to combine efforts in implementing all these new initiatives and recommendations arrived at the Civil BRICS 2020? In your view, how do you also see the way forward for the Association of NGOs as part of BRICS?

Marinina: The institutionalization of cultural ties is a key part of our draft communiqué. During the meetings, many Russian and international members of the working group from the five nations advocated for the creation of a ‘Union (Association) of BRICS Non-Governmental Organizations’ and the formation of a single network of BRICS NPOs. I am certain that this will enable us to engage in clear and properly coordinated manner, hold a constructive dialogue with the leaders of states and governments, and jointly implement the proposals and initiatives that received support at the BRICS Civil Forum.

This article has been read 381 times
COMMENTS