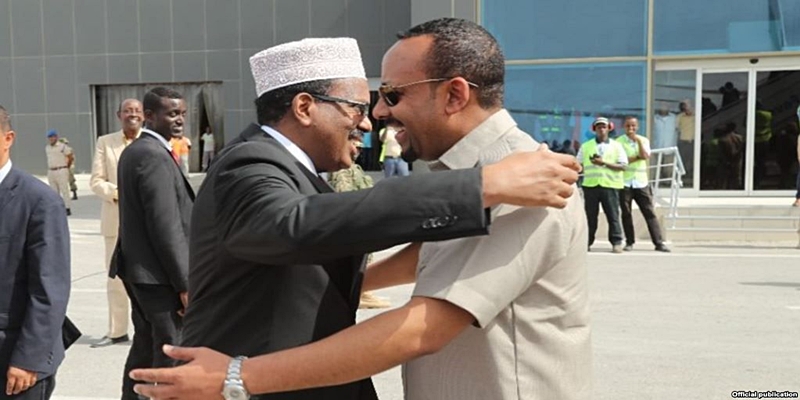 It is unlikely that Pres. Farmajo will hold fair and free elections or he will resign for the interest of the country. PM Abiye Ahmed and Isaias Afwerki (The Horn Dictators) pressure him to stick to power with all means for seeing democratic system in Somalia a threat to their power.

PM Abiye Ahmed has one more reason to keep Pres. Farmajo in power: It is to succeed in seizing four seaports of Somalia and Somaliland that pres. Farmajo allegedly, illegally and treasonously signed for him to have access to the sea for land-locked Ethiopia - a dream that his predecessors failed to achieve but Pm Abiye hopes to make that dream come true through deceitful “East Africa Merger.”

Pres. Farmajo and PM Abiye Ahmed came to office in 2017 and 2018 respectively. Both were elected with ovations and acclamations for claiming reformers. After holding several meetings with the brutal dictator of Eritrea, Isaias Afwerki, behind closed-door, Abiye and Farmajo turned 360 degrees from being reformers to dictators.

In an address that PM Abiye Ahmed gave to Ethiopia federation parliament, he said that Somalia and Ethiopia will have a merger into one country with one president, one government, one passport and one flag through what he called “East Africa Merger.” PM Abiye Ahmed also said that publicly several times in Addis Ababa. Naive Farmajo accepted Abiye’s deceit easily and cunning Abiye was overjoyed. They treated people of Somalia like a bunch of herd (animals) without reasoning and easily accepting the treason against their country and their existence. Abiye Ahmed and Mohamed Farmajo  are behaving like two CEOs out to merg their business companies.

The seaports belong to nations and not to individual like Farmajo. If Abiye thinks that Farmajo can give him Somali seaports, he is naive and witless too.

The origins of hostility between Somalia and Ethiopia goes back to the 16th century. The Ethiopian–Somali conflict is territorial dispute between the two countries. Europeans helped Abyssinia seize large portions of Somali territories which they still occupy. Besides that, emperors, kings and rulers of Ethiopia had been always aggressive and hostile to Somalia. They tried to invade and annex Somalia to get access to the sea for land-locked Ethiopia even though they never succeeded in their centuries-long aggression.

As long as Ethiopia colonises Somali territories and has ambitious greed to seize Somali coasts for sea access, there will never be peace between Ethiopia and Somalia. To destabilise Somalia with the purpose of pursuing chance to infiltrate more and occupy Somalia for sea access, the Tigre government headed by Meles Zenawi persuaded leaders of Somalia to have tribal federalism in 2012 instead of democratic, decentralised unitary government, which is best for Somalia for being homogeneous society in culture, religion, language, color and ethnicity.

Federalism has become disastrous to Somalia and divided it into tribal regions breeding more tribalism and more hatred. Federalism is for countries with different ethnic groups, cultures, religions and languages like Ethiopia. The Ethiopian-imposed federalism in Somalia destabilised Somalia more for creating unruly, insubordinate parallel national and regional presidents promoting the defiance of established authority. PM Abiye Ahmed is pursuing the destabilisation policy of Ethiopia against Somalia unless the federal system is abolished replacing it with democratic, decentralised, unitary government system.

The two dictatorial cronies, Abiye and Afwerki, think that Somalis are an easy prey. They promised to keep president Farmajo  in power if he accepted the treacherous “East Africa Merger.” But what they failed to understand was that Somalis have always outwitted, outsmarted and defeated their enemies since the beginning of their existence. When swords and spears clamor in battlefields, Somalis always return with decisive victories.

Now, the treacherous “East Africa Merger” is in shambles and the three leaders have set fire on the whole Horn of Africa. They succeeded in invading and destroying Tigre Region of Ethiopia. Ethiopia is engulfed by devastating civil wars because of Abiye’s dictatorship-inclined mentality and Afwerki’s ill-advice, and it may never recover from it. The eyes of the international community are focused on the three now and at least two of them are allegedly accused of committing serious war crimes in Tigre and the remaing one is under watch.

Pres. Farmajo still believes in the treacherous, collapsing “East Africa Merger” yearning for dictatorship. Unless the international community forces pres. Farmajo out of office soon to avert civil war in Mogadishu, there is only one thing that will unseat him: Fear for his life for having the same fate like his uncle, Siad Barre, to defend and protect the democratic system of Federal Somalia from dictatorship.

This article has been read 261 times
COMMENTS