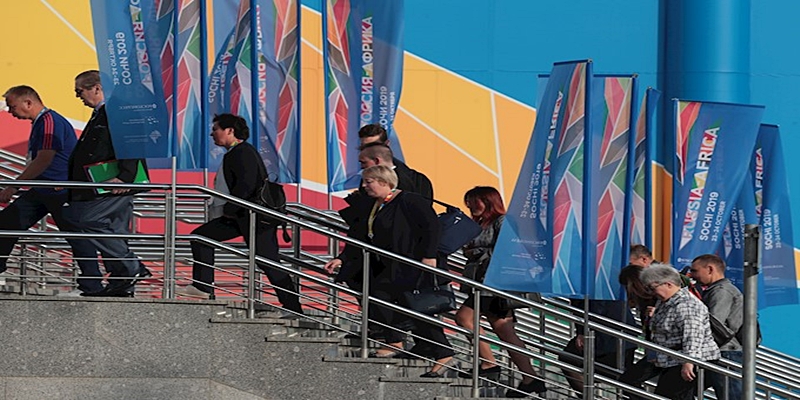 To raise its geopolitical influence, Russia has been identifying mega infrastructure projects such as nuclear power and energy, natural resources exploration and talks consistently about increasing trade with Africa. Russia needs to work on a coordinated mechanism for financing these corporate policy initiatives and further push for increased trade with Africa.

On November 23, a videoconference organized by Federation Council of Russia, Chamber of Commerce and Industry of Russia and Business Russia Association focused partly on identifying funding sources for exports, concretizing proposals for increasing exports to Africa and looking at facilitating amendments to the Russian legislation if required to promote exports to the African market.

Senator Igor Morozov, a member of the Federation Council Committee on Economic Policy, and newly elected Chairman of the Coordinating Committee on Economic Cooperation with Africa, notes that in conditions of pressure from sanctions, it has become necessary to find new markets, new partners and allies for Russia. "This predetermines the return of Russia back to Africa, makes this direction a high priority both from the point of geopolitical influence and in the sphere of trade and economic context."

"It is important for us to expand and improve competitive government support instruments for business. It is obvious that over the thirty years when Russia left Africa, China, India, the USA, and the European Union have significantly increased their investment opportunities there in the region," Morozov stresses.

With a renewed growing interest in the African market, Russians are feverishly looking for establishing effective ways of entry into the huge continental market. As result, Senator Igor Morozov unreservedly suggested creating a new structure within the Russian Export Center – an investment fund. He explains thus: "Such a fund could evaluate and accumulate concessions as a tangible asset for the Russian raw materials and innovation business."
The Coordinating Committee for Economic Cooperation with African States was created on the initiative of the Chamber of Commerce and Industry of the Russian Federation and Vnesheconombank with support from the Federation Council and the State Duma of the Federal Assembly of the Russian Federation. It has had support from the Ministry of Foreign Affairs, the Ministry of Economy and Trade, the Ministry of Natural Resources, as well as the Ministry of Higher Education and Science.

During a restructuring meeting with the Coordinating Committee for Economic Cooperation with African States, President of the Russian Chamber of Chamber and Industry, Sergei Katyrin, said, "the primary task now is to accelerate Russia's economic return to the African continent. We practically left in the 90s. It is now very difficult to increase our economic presence in Africa."

According to Katyrin, Russia's economic presence in Africa today is significantly inferior in comparison to the leading Western countries and BRICS partners. "It's time to overcome this yawning gap. Today, we face a difficult task to ensure the activities of Russian entrepreneurship on the African continent in the new conditions, taking into account all the consequences of the coronavirus pandemic."

Katyrin stressed the necessity to resolve financial mechanism for business and for infrastructural projects. "We need a state financial mechanism to support the work of Russian business in Africa otherwise it will be very difficult to break through the fierce competition of Western companies with such support. We need to focus on those areas where you can definitely count on success," he told the meeting.

With the participation of representatives of business and expert circles, this committee's primary task is to consolidate the efforts of business, government and public structures of Russia, facilitate the intensification of economic activities in Africa. It has the responsibility for adopting a more pragmatic approach to business, deepening and broadening existing economic collaborations and establishing direct mutually beneficial contacts between entrepreneurs and companies from Russia and African countries.

During this October meeting, the participants discussed various issues and acknowledged that the committee has achieved little since its establishment. The meeting identified factors that have hindered its expected achievements and overall performance since 2009. Admittedly, a quick assessment for over one decade (2010 to 2020) has shown very little impact and tangible results.

The committee's documents listed more than 150 Russian companies as members, most of them have hardly been seen participating in business events in order to get acquainted with investment opportunities in Africa.

Notwithstanding the setbacks over the years, Russians are still full of optimism. A new team was put in place during the meeting hosted by the Russian Business Chamber. Russian Senator Igor Morozov was elected as the new Chairman of the Coordinating Committee for Economic Cooperation with African States.

Over the years, experts have reiterated that Russia's exports to Africa could be possible if the country's industrial base experiences a more qualitative change. They have argued for the benefits of introducing tariff preferences for trade with African partners.

“The situation in Russian-African foreign trade will change for the better if the Russian industry undergoes technological modernization, the state provides Russian businessmen systematic and meaningful support, and small and medium businesses receive wider access to foreign economic cooperation with Africa,” Professor Alexey Vasileyev, former director of the Institute for African Studies (IAS) under the Russian Academy of Sciences.

The Institute has played a considerable part in the development of African studies in the Russian Federation. For over 25 years, Professor Vasileyev directed the Institute for African Studies. He has carried out an analysis of Africa’s socio-economic problems, including Sub-Saharan Africa, and has many books and monographs such as Africa: The Stepchild of Globalization and Africa, the Challenges of the 21st Century.

Professor Vasileyev, now the Chair for African and Arab Studies at the Peoples' Friendship University of Russia (since 2013), and Special Representative of Russian President for Relations with African leaders (2006–2011), points out that the level and scope of Russian economic cooperation with Africa has doubled in recent years, "but unfortunately Russian-African cooperation is not in the top five of the foreign players in Africa."

Speaking particularly about trade, the professor notes that not all African countries have signed agreements with Russia, for example, on the abolition of double taxation. He urges African countries to make trade choices that are in their best economic interests and further suggested that Russia should also consider the issue of removal of tariff and non-tariff restrictions on economic relations.

In order to increase trade, Russia has to improve its manufacturing base and Africa has to standardize its export products to compete in external markets. Russia has only few manufactured goods that could successfully compete with Western-made products in Africa. Interestingly, there are few Russian traders in Africa and African exporters are not trading in Russia's market, in both cases, due to multiple reasons including inadequate knowledge of trade procedures, rules and regulations as well as the existing market conditions, he says.

He believes that it is also necessary to create, for example, free trade areas. "But before creating them, we need information. And here, I am ready to reproach the Russian side, providing little or inadequate information to Africans about their capabilities, and on the other hand, reproach the African side, because when our business comes to Africa, they should know where they go, why and what they will get as a result," Professor Vasileyev explicitly adds.

The United States, European Union members, Asia countries such as China, India and Japan, have provided funds to support companies ready to carry out projects in various sectors in African countries. Some have publicly committed funds, including concessionary loans, for Africa. For example, during the last Ministerial Conference of the Forum on China-Africa Cooperation (FOCAC), Chinese President Xi Jinping said that China would expand cooperation in investment and financing to support sustainable development in Africa. China provided US$60 billion of credit line to African countries to assist them in developing infrastructure, agriculture, manufacturing and small and medium-sized enterprises. It fully understands Africa's needs and its willingness to open the door to cooperation in the field of scientific and technological innovation.

The method for financing the building of infrastructure is relatively simple. In general, governments obtain preferential loans from the Export-Import Bank of China or the China Development Bank, with the hiring of Chinese building contractors.

The Chinese policy banking system allows leading Chinese state-owned enterprises to operate effectively in Africa, with the majority of these active in infrastructure and construction in Africa. China has always been committed to achieving win-win cooperation and joint development with Africa. Russia could consider the Chinese model of financing various infrastructure and construction projects in Africa.

Official proposals for all kinds of support for trade and investment have been on the spotlight down the years. In May 2014, Russian Foreign Minister Sergey Lavrov wrote in one of his articles: "we attach special significance to deepening our trade and investment cooperation with the African States. Russia provides African countries with extensive preferences in trade."

Lavrov wrote: "At the same time, it is evident that the significant potential of our economic cooperation is far from being exhausted and much remains to be done so that Russian and African partners know more about each other's capacities and needs. The creation of a mechanism for the provision of public support to business interaction between Russian companies and the African continent is on the agenda."

After the first Russia-Africa Summit in the Black Sea city, Russia Sochi in October 2019, Russia and Africa have resolved to move from mere intentions to concrete actions in raising the current bilateral trade and investment to appreciably higher levels in the coming years.

"There is a lot of interesting and demanding work ahead, and perhaps, there is a need to pay attention to the experience of China, which provides its enterprises with state guarantees and subsidies, thus ensuring the ability of companies to work on a systematic and long-term basis," Foreign Minister Lavrov explicitly says.

According to Lavrov, the Russian Foreign Ministry will continue to provide all-round support for initiatives aimed at strengthening relations between Russia and Africa. "Our African friends have spoken up for closer interaction with Russia and would welcome our companies on their markets. But much depends on the reciprocity of Russian businesses and their readiness to show initiative and ingenuity, as well as to offer quality goods and services," he stresses.

Amid these years of Western and European sanctions, Moscow has been looking for both allies and an opportunity to boost growth in trade and investment. Currently, Russia's trade with Africa is less than half that of France with the continent and 10 times less than that of China. Asian countries are doing brisk business with Africa. According to UNCTAD's World Investment Report 2020, the top five investors in the African continent are Netherlands, France, the United Kingdom, the United States and China.

In 2018, Russia's trade with African countries grew more than 17 per cent and exceeded $20 billion. At the Sochi summit, Russian President Vladimir Putin said he would like to bring the figure $20 billion, over the next few years at least, to $40 billion.

In practical reality, the start of the African Continental Free Trade Area (AfCFTA) gives an additional signal for foreign players to take advantage of this new opportunity in Africa. The AfCFTA has a lot more on offer besides the fact that it creates a single market of 1.3 billion people.

That said however, Russia has its own approach towards Africa. It has its own pace for working with Africa. With the same optimism towards taking emerging challenges and opportunities in Africa, Russia has to show financial commitment especially now when the joint declaration from the first historic Summit held in October 2019 ultimately sets the path for a new dynamism in the existing Russia-Africa relations.

By Kester Kenn Klomegah
The author writes frequently about Russia, Africa and the BRICS.

This article has been read 236 times
COMMENTS