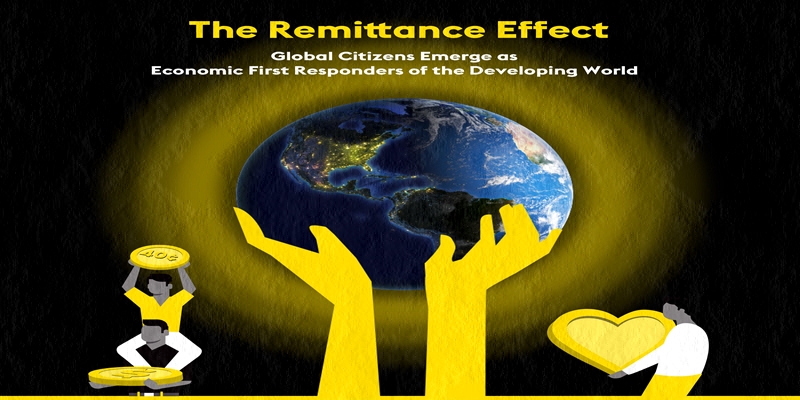 Person-to-person ("P2P") international transfers, or remittances, sent by global citizens to their homelands represent the largest foreign economic support structure for developing economies. According to a new report by Oxford Economics, commissioned by Western Union (NYSE: WU), a global leader in cross-border, cross-currency money movement, remittances have helped smooth COVID-19 pandemic-induced economic shocks, increasing the resilience of developing nations throughout 2020 and presenting a potential lifeline for recovery in 2021 and beyond.

The Oxford Economics Report: The Remittance Effect: A Lifeline for Developing Economies Through the Pandemic and Into Recovery identifies several positive economic and remittance consumer fundamentals that could support unexpected strength in remittance flows to developing nations compared to World Bank forecasts of slowdown in 2021.

The report states that global P2P transfers to developing nations, which surpassed the value of Foreign Direct Investment in 2019, can potentially achieve what overseas development aid (ODA) and private direct investment cannot - the P2P transfers quickly and efficiently put money directly into the hands of individuals who then use the money to fund a broad range of economic activities. This "Remittance Effect" drives profound gains for developing economies, including reducing poverty and driving increases in economic activity. In addition to being engines for growth, P2P transfers enhance connectivity by linking individuals worldwide, thereby contributing to economic, social, and political interdependence between nations, even as governments shut borders.

"The research further shines a light on the resilience of this global web of financial interconnectivity and confirms what Western Union has witnessed repeatedly: Crises make people more determined to provide support to the people they care about. When times get hard in developing economies, remittance-senders become front-line workers of economic security," says Hikmet Ersek, President and CEO of Western Union.

"This report justifies bestowing a new title of 'Economic First Responders' upon these global citizens and local heroes. The love and money they send across the world's borders have helped smooth the economic shocks from the pandemic and foster resiliency and recovery within their home nations throughout 2020 and into 2021 and beyond," he adds.

The World Bank estimates that the pandemic will push an additional 88-115 million people into extreme poverty, with the total potentially rising to as many as 150 million in 2021. The developing world, home to many of the world's most economically vulnerable people, will face the most extreme consequences.

To avoid the economic divide, Western Union is encouraging policymakers across the spectrum to prioritize legal, smart, safe, and equitable cross-border migration systems, which will uplift developing nations' economies and continue to support developed economies to recover and address human capital shortages.

Ersek adds, "In the critical task of rebuilding developing nations in a post-pandemic world, millions of these Economic First Responders will continue to step up. These heroes deserve so much credit for the irreplaceable role they play in their host and home countries' economies. There has also simply never been a greater need for innovation and technology that provides the on-the-ground financial support flowing instantly across borders."

For 170 years, Western Union has been focused on connecting individuals to their families and loved ones globally, anytime, anywhere, and today, it continues to connect them through one of the world's largest global financial networks that move 130 currencies electronically worldwide within minutes.

Remittances were a silver lining in a cloudy 2020 for developing nations. Positive data for 2020 on remittance inflows from several central banks in receiving countries, positive earnings data from leading money transfer companies, as well as survey evidence indicating the resiliency of senders, who have been highly motivated to support families and loved ones back home, have all supported a stronger than expected potential outturn for remittances in 2020.

The remittance outturn for 2021 could fall anywhere within a wide range between a decline and a return to the pre-pandemic trend of growth, as uncertainty around the outlook is high.

The World Bank forecast of a further 7.5% slowdown in 2021 may be exceeded. As predicted by the World Bank, a cumulative fall of 14% over 2020 and 2021 would be unprecedented in the recent history of remittance flows, which have tended to trend upwards year-over-year.

A predicted rebound of GDP growth in sender economies, as vaccines are rolled out, restrictions are lifted, fiscal policy remains supportive and pent-up demand is released, augurs well for remittances in 2021.

Remittances are the hidden engine of global connectivity; people are single-handedly responsible for the massive capital movement across the world's borders.

Financial flows between individuals/people contribute to interdependence worldwide – social, economic, and political. It is unmatched by any other type of public or private cross-border investment flows.

Remittance flows are directed to meet the recipients' specific needs in developing economies. In comparison, governments' fiscal response and flows of overseas development aid (ODA) can sometimes be delayed and blunter in their application. Also, developing country governments have less budgetary capacity to support their economies.

While the World Bank estimates that remittances fell by 7% in 2020, this decline will be significantly less severe than the expected decline in private investment capital. UNCTAD expects foreign direct investment (FDI) to develop economies to decline by 35% to 45% in the full year 2020.

Remittances multiply through a nation's economy contributing 0.40 cents GDP for every USD1.0 of inflow.

The .40 cents multiplier is comparable or higher than some multiplier estimates of FDI or ODA.
Applied to the $548bn of developing-country remittance inflows in 2019, this translates to a direct GDP impact on these economies of $219bn.

Remittances have short-run effects on national output, as additional spending is received as income elsewhere in the economy. However, the full economic benefits of remittances are only realized in the long term due to the transformative effects of increased spending on education, health, and other investments.

At a micro level, remittances benefit recipient households in developing countries by providing an additional income source that helps fund essential expenditures, lowers the incidence of extreme poverty, shields them against economic shocks, and supports long-term investment in healthcare and education.

The global clout of remittances is underappreciated, despite being the largest foreign capital inflow to developing markets (excluding exports).

Remittance flows to developing economies are indispensable, exceeding ODA by a factor of three. According to the World Bank, remittances to developing countries totaled $548bn in 2019, overtaking FDI to become the largest inflow of foreign capital (excluding exports) to developing markets.

A robust study of the remittance 'multiplier' is critical, as the current modeling is inadequate and underestimates the real effects.

The remittance 'multiplier' is lower than one due to the impact of 'leakages' – some of the funds are saved or used to pay off debt (not spent), while a high share of spending in developing economies is likely to be on imported goods (e.g., medicines). A lack of investment opportunities in developing economies may also explain why remittance flows often fail to generate self-reinforcing development. However, a more complete measure of remittance economic impacts that also captures their longer-term transformative effects would likely result in more extensive estimates of the multiplier effect.

Existing research on multiplier impacts is fragmented in terms of time periods covered, methods used, the multiplier definition, and the range of impacts measured.

There is an opportunity to bridge the gap in existing research to measure the remittance multiplier more comprehensively and consistently across countries, looking at the individual effects of different use of funds and factoring in other country-specific characteristics.

Courtesy: The Western Union Company, a global leader in cross-border, cross-currency money movement and payments, and Oxford Economics, a leader in global forecasting and quantitative analysis.

This article has been read 389 times
COMMENTS