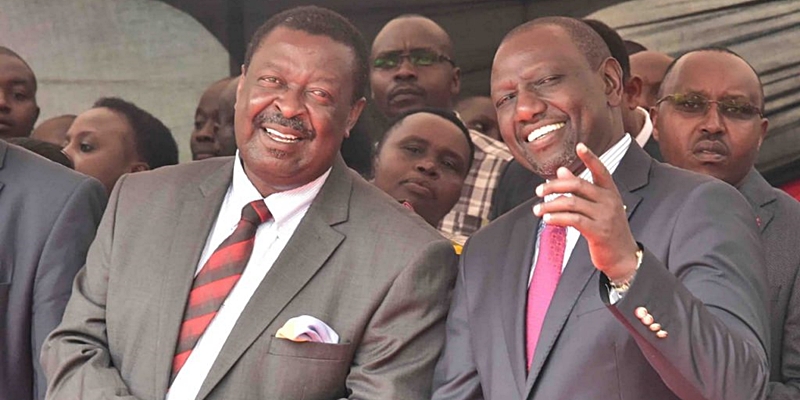 The country is politically polarized on 2022 elections as though polls are next week. Opinion poll ranking Raila Odinga being one of the front runners albeit with some slight drop over all the other presidential hopefuls, but below the 50-plus one margin, meaning if election were called today he would face a run-off. But unlike those pundits who rely on pollsters to predict future pattern of events, I advance hypothesis that the elections will be a three-horse race between Raila, Musalia Mudavadi, and William Ruto. However, that race will eventually narrow down to Musalia against Raila – a two-horse race that could see the latter face the unexpected wrath of his former ODM stalwart.

This country is politically polarized because of three tribes – the Kalenjin, Kikuyu and Luo. This means neither community is likely to embrace the other easily when it comes to voting come 2022. It is also true other communities’ voters are unlikely to vote back another person from the House of Mumbi or from Koitalel scion to the pinnacles of authority. Its sticky for Ruto side given that political elites especially from Mt. Kenya region want him to retire with Uhuru.

Similarly, the presidency is composed of two holders-the president and the DP which majority of Kenyans are yet grasp on its import. “Though the issue of if the presidency comprise of the duo (UhuRuto), it is still subject to court interpretation,” remarks Prof Edward Kisiangani lecturer in History and Politics, Kenyatta University. He further adds, “However, “The Collective Responsibility Theory” will/is haunting Ruto candidature gravely.

The Uhuru regime in famous for grand graft, economic mismanagement, poverty and extra-judicial killings that will burden and/or easily bury and deprive DP off victory on day one of his campaign in 2022 leaving Mudavadi/Raila to face off in such scenario.”

This analogy then leaves the electorate with ODM’s Raila and ANC’s Musalia Mudavadi (MM). While I believe pollsters would predict Raila as the likely man to give Musalia a run for his money, I will sketch a scenario that has Mudavadi coming out as the next president because of his perceived neutrality.

If the former premier (Raila) is successfully find himself on the ballot to vie for presidency in 2022, two things might happen. One is fallout and the other one is Tyranny of number game plan might resurrect under the lie that Raila Odinga is selfish, greedy for the top seat. That gives Musalia a plus against Raila.

Kalenjin and Kikuyu elite have convinced the electorate that their tribulations are as a result of Agwambo, an emotive tag and allegation that Raila will not manage to counter easily even if he hires the best propagandists equivalent of the energetic chief Nazi propagandist Joseph Goebbels (1897-1945). From the ICC, Mau Forest eviction of the “defenseless” and the rebirth of Mungiki among others are all baggage burdening down the son of Jaramogi Oginga in his search for the Kalenjin/Kalenjin vote.

When the race eventually narrows down to the two, the most likely scenario is that Mudavadi will inherit a large chunk of Kikuyu and Kalenjin votes. These are sentiments an established lawyer/political analyst Martin Oloo partially refutes. “in scenario of a Raila/Musalia face off in 2022, MM stands a chance to inherit big chunk of Mt. Kenya and Rift Valley and Eastern vote and only if Kalonzo will be backing him, but to win, his politics cannot be business as usual. He must assemble an astute team of strategists because Raila is one of the best grassroots mobilizers.”

He could inherit the Kikuyu vote because of his neutrality and having worked with Kibaki amicably without brushing the PNU side of the coalition the wrong way and the Kalenjin bloc since he has kinsmen in the Rift Valley.

This situation elevates Mudavadi to a “prince of peace” who can unite the Kikuyu, Luo, and Kalenjin. In the event that he chooses his running mate from the Kalenjin or from among the “Easterners” that then portends a catastrophic effect on Raila and ODM. Though Musalia might not emerge victorious in the first ballot, the “Natural Law of Selection” could favour him crush Jubilee/ODM in the second round. Additionally, in our tribal charged and divisive politics, elites feel Mudavadi offers this country an opportunity to break the “Big Families” chokehold on power.

Musalia’s reserved mien and uncanny sober caution portrays him and the ANC party as a boost to national
cohesion. He is perceived by electorate as an alternative competent leadership from former Western Province, which demonstrates its neutrality by voting generously for any presidential candidate whose agenda target the populace. As a Luhya, he would break the perennial duel between who from among the “Big Families” tribes would win the tenancy for the house on the hill.

The impact on the national psyche of such a choice would be incalculable, and may help us defang tribalism while working towards the achievement of national healing and cohesion. This point in history, Kenya requires a likable leader who epitomizes “peace” and “stability.”

According to Kibisu Kabatesi, with three decades experience in presidential campaigns, the belief that the presidency will come after the Luo preceded the Luhya to the throne was a political gimmick that was crafted in 2007 campaigns to draw support for Raila Odinga.

“He was a very unpopular figure and difficult to sell in western after the fallout with Kijana Wamalwa in the 1990s. We had to resuscitate a myth to for the hard sale”, says Kabatesi who adds that the Luhya have only supported their leaders when the latter lease support to another kingpin. And with an unassuming and amiable Mudavadi mien signifying Mulembe (peace), the Luhya nation stands on the pedestal of making history.

Unfortunately, the detractors know it, but the community leaders don’t. With Mulembe Nation merger beckoning under NASA, Mudavadi has a pivotal platform to reach for his 2022 candidacy. He has the making of a mature cohesive leadership, qualities he holds in store for a progressive nation as opposed to his rivals.

In many established democracies, heads of states are chosen from a cadre of leaders with exemplary track records where being a “career politician” is not deemed the best evidencing ground for national leadership. Perhaps it is why westerners vote retired military personnel and corporate CEOs instead of politicians.

Logically the argument is that managing the Treasury is equivalent of managing a “mini-state”. Mudavadi has proved his worth as an economic steward to “commanding heights” of the Kenyan economy as Treasury head.

For our economy to compare with those of the Asian tigers such as Singapore and Malaysia – nations that were behind us in the 1970s – Kenyans must write epitaphs of contenders who “make news” and cannot “write news” in our history.

Mudavadi’s presidency promises a paradigm shift from a polarized course to a cohesive and optimistic nation that offers equal opportunity for all.

The author is an analyst with Gravio Africa. The views are his own.

This article has been read 517 times
COMMENTS