Kabila and Tshekedi Should Reconcile and Let DRC Move Ahead 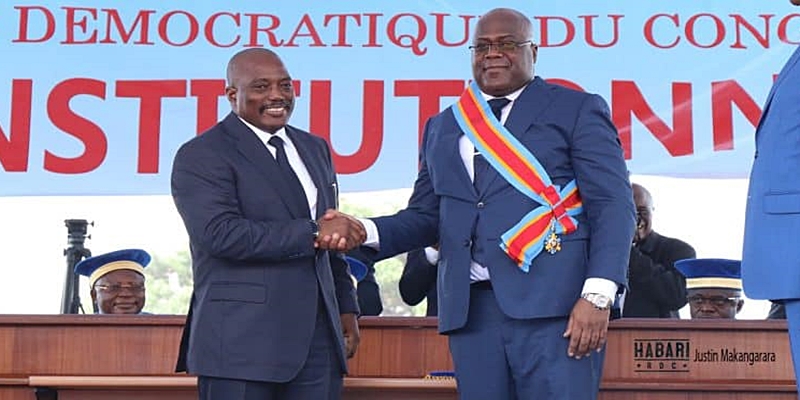 Former president Joseph Kabila of the Democratic Republic of Congo (DRC) shocked the world by pulling a surprise in 2018. This surprise saw the incumbent president Felix Tshekedi win presidency without parliamentary majority. Many analysts rightly interpreted that Kabila’s move was a ploy to keep his grasp on power and run the country by proxy. His hat tricks worked, though temporarily, for Tshekedi ascended to power without any meaningful majority that would help him to fulfill his polices and promises.

Tshekedi had, out of necessity, had to temporarily depend on Kabila whose party the Parti du Peuple pour la Reconstruction et la Démocratie (PPRD) won 500 seats of the National Assembly and 108 Senate seats compared to only 32 and 0 in the Senate that Tshekedi’s the Union pour la Démocratie et le Progrès Sociale (UPDS) won. The duo entered into a coalition, a fact that made Kabila happy despite the fact that Tshekedi was knottily grappling with how to detach himself from Kabila.

Upon assuming presidency, Tshekedi started to deconstruct the system that created him. He used jujitsu to technically extricate himself from Kabila, with a view of becoming his own man hence apply and enjoy presidency without manipulation. Kabila’s man in the government, PM Sylvestre Ilunga Ilunkamba recently bowed down after parliament voted for his removal for incompetence. A total of 367 of 500 deputies (Daily Nation, January 29, 2021) supported this removal. After the resignation of Ilunkamba, two more giants allied to Kabila were brought down. These are the former Speakers of the House and Senate Jeanine Mabunda and Alexis Mwamba respectively. Tshekedi is slowly demolishing Kabila’s fortress in the government and has already announced the cessation of his coalition with Kabila.

Will Kabila’s dirty linens be put in the agora for every eye to see? Will his tenure in office be audited?   Does Kabila’s clamour for power through proxies in various institutions show that he has something to hide or fear? Tanzania has a good example for Africa. Ever since its founder relinquished power, no outgoing president has ever sought to have his finger on the trigger or to have sleepless nights simply because his successor would haunt and hound him. This has led to peace and stability in the country, virtues that do not come easily and call for accountably and trustworthiness.

Kabila should take a leaf from the neighbouring Angola where the family of the former president, Eduardo dos Santos, has faced many corruption-related charges fronted by João Manuel Gonçalves Lourenço’s government. Lourenço, Dos Santos’ handpicked successor turned tables on his mentor soon after assuming office. The Dos Santos’ family has decided to play it cool instead of embarking on destabilising the country.

Considering the unfolding power undercurrents in the DRC, it is important that the two leaders stop destabilising the fragile country. They need to take a leaf from Ilunkamba who was quoted as saying “as a statesman, I drew the conclusion from the evolution of the current political situation.” Ilunkamba might seem to be weak, but he sets a very good precedent for others to understand and accept that the country is bigger than personal interests. Presidency, too, remains a public institution that must be used for public interests and purposes. Kabila must underscore the fact that he was able to lead the DRC for 18 years and brought about some changes because he had nobody to tussle with over power. The duo must avoid the weaponization of their privileges as former and incumbent presidents. Avoiding escalating the mess the DRC has been in is the only thoughtful and patriotic option left for them.

The Kabila––Tshekedi struggle for power should not be viewed as a mere chink. If there is no letup, it can end up becoming a big and stinking gash. The duo should show leadership and avert the looming chaos. Kabila played his role for 18 years despite his controversial performance. He must let Tshekedi do his part freely and peacefully. Power belongs to the people. Nobody has exclusive ownership of it. Kabila should help Tshekedi build the DRC.

This article has been read 493 times
COMMENTS