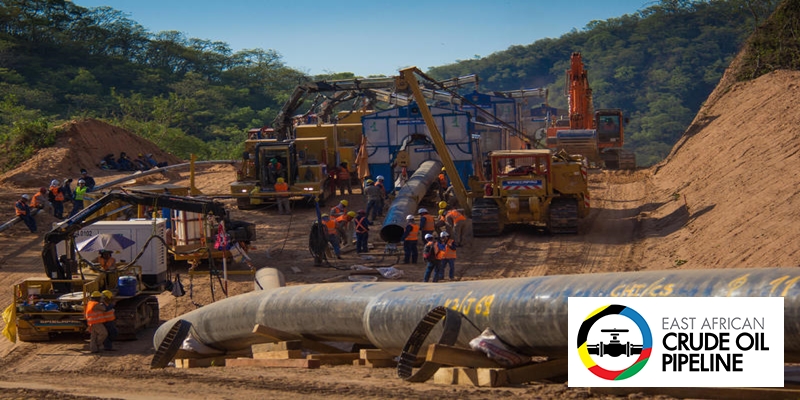 We, the undersigned 263 civil society organisations (CSOs), are writing to you to share our deep concern about your potential participation in a $2.5 billion project finance loan for the construction of the East African Crude Oil Pipeline (EACOP) project. French oil major Total, together with the governments of Uganda and Tanzania and Total’s project partner, the Chinese state-owned oil firm CNOOC, are pushing towards reaching the already much-delayed Final Investment Decision on the EACOP early this year.

This project is facing widespread and growing resistance. In 2020, a global petition against the project gained over one million signatories. In November 2020 in Uganda, over 877 petitioners - including 810 directly affected people - signed a petition to Total and the other EACOP project developers. They called on the oil companies to prioritise environmental conservation and community livelihoods over the EACOP project.

Legal challenges to the project have also arisen, including a petition in the East African Court of Justice and a court case against Total in France. Civil society members and journalists who have highlighted these and other risks have been intimidated and even arrested.

The undersigned 263 CSOs from across the world stand in solidarity with the directly affected communities and with local CSOs defending community rights, in addition to key environmental resources that are at risk because of the EACOP. We represent CSOs from 49 countries, including 84 organisations from the affected countries of Uganda, Kenya and DR Congo.

The proposed 1,445-kilometer crude oil pipeline from Hoima in Uganda to the port of Tanga in Tanzania would, if completed, be the longest heated crude oil pipeline in the world. The risks of this project to people and nature in the affected countries, and to the world’s climate have been extensively documented, including in a recent Risk Briefing for Financiers. These include: significant human rights impacts to local people through physical displacement and threats to incomes and livelihoods; unacceptable risks to water, biodiversity and natural habitats; as well as unlocking a new source of carbon emissions that will either prove financially unviable or produce unacceptable climate harm.

Negative Impacts on Communities and Rights

As currently planned, the EACOP will pass through 178 villages in Uganda and 231 in Tanzania, leading to
massive physical and economic displacement. An estimated 14,000 households across Uganda and Tanzania have lost or will lose land as a result of the pipeline; hundreds of families will need to be resettled; and thousands more will be affected by the associated oil development projects.

Between 2018 and 2019, Total placed cut-off dates for compensation on the properties of over 5,000 households in Uganda whose land is being acquired to develop the pipeline. Through the cut-off date, Total stopped people from using their land to grow income-generating (cash) and perennial food crops, in addition to stopping them from setting up new developments. To date, the people are yet to be compensated amidst the above limitations. This has left people impoverished. The impacts of this increased poverty are being felt by women, parents, children, the elderly and others.

As well as severe impacts on local communities and their rights, the pipeline threatens one of the world’s most ecologically diverse, wildlife-rich regions. It threatens Uganda’s oldest and largest nature reserve, the Murchison Falls National Park, which would be opened up to large-scale oil extraction at a time when the world is acting to urgently reduce its reliance on fossil fuels.

Nearly 2,000 square kilometres of protected wildlife habitats will be negatively impacted by the EACOP project. In Uganda, the pipeline will impact the Taala and Bugoma Forest Reserves, the latter home to large groups of Eastern Chimpanzees. Some 500 square kilometres of wildlife corridors for the Eastern Chimpanzee and African Elephant are likely to be severely degraded.

In Tanzania, the pipeline will run through key biodiversity areas including the Biharamulo Game Reserve and Wembere Steppe Key Biodiversity Area. It will also put two important Ecologically or Biologically Significant Marine Areas at high risk from the huge amount of oil to be transferred offshore at the Tanga Port. The project will also directly impact several Ramsar Wetlands, including the Murchison Falls-Albert Delta Wetland System and a number of Ramsar sites lying just west of Lake Victoria, including the Lake Nabugabo System, the Nabajjuzi System, and the Sango Bay-Musambwa Island.

Oil spills from the EACOP pose a particularly worrying risk of further devastating human impacts. About onethird of the EACOP will be built in the Lake Victoria basin, a source of water and livelihoods for up to 40 million people. To put major national parks, wetlands, rivers and lakes, not to mention the livelihoods of millions at risk, is as dangerous as it is unacceptable.

The construction of EACOP will unlock commercial exploitation of multiple oil fields in landlocked Uganda.
Further expansion of the fossil fuel industry, including the construction of new oil pipelines and related infrastructure, is incompatible with the goals of the Paris Climate Agreement and manifestly irresponsible at a time when the catastrophic impacts of global warming are becoming increasingly clear.

According to the project’s website, the EACOP will carry 216,000 barrels of crude oil per day at ‘plateau production.’ The emissions from burning that oil would release an estimated 34.3 million metric tons of CO2 equivalent (CO2e) per year, an amount that dwarfs the current annual emissions of Uganda and Tanzania combined, and is roughly equivalent to the carbon footprint of nearly nine coal-fired power plants.

Moreover, in economic terms, the project does not stack up. The value of Uganda’s oil reserves has fallen by some 70% over the past five years as oil prices have fallen. This value will fall further in the global low-carbon transition. The project risks driving Uganda and Tanzania deeper into unsustainable debt, all for oil revenues which will amount to “peanuts”.

Contrary to what proponents argue, the EACOP will not “unlock East Africa’s potential”. East Africa needs energy security based on widespread rollout of renewables and the millions of clean jobs that come with it, and it needs to protect its natural heritage. At this critical juncture, it needs governments, financial institutions and the energy industry squarely focused on the task of managing a just transition to a lowcarbon future. African countries should not be left behind as others transition. This is especially so, given Africa’s extreme vulnerability to climate change. Certainly, no government, financial institution, company or investor that cares for Africa and humanity’s wellbeing should support projects that will lock the continent into fossil fuel projects that are likely to become stranded assets. The EACOP is doing exactly this.

Our call on banks

South Africa’s Standard Bank, including its Ugandan subsidiary Stanbic, China’s ICBC and Japan’s SMBC are known to be acting as advisors to the EACOP project to help it secure the $2.5 billion project loan required for construction.

From these banks we demand:

• Cease your bank’s involvement as a financial advisor to the project. Additionally, we call on all banks and all financial institutions with a business relationship to Total and CNOOC to:

• Publicly commit not to participate in financing the EACOP project or associated oil projects;

• Engage with the governments of Uganda and Tanzania and other financiers to promote an energy future for East Africa that does not rely on oil or other fossil fuels, but rather on clean energy alternatives; and

• Demand that Total acts immediately to provide full, fair and adequate compensation to people already affected by the pipeline for the impacts to their land, in accordance with international human rights standards.

Our organisations collectively pledge to continue to carefully monitor the situation and act as necessary. Given the urgency of the matter we seek a response from you on this letter as soon as possible, but no later than 26th March. We would welcome the opportunity to arrange a meeting to discuss these matters further.

This article has been read 604 times
COMMENTS