AfCTFA: A New Dawn for Africa 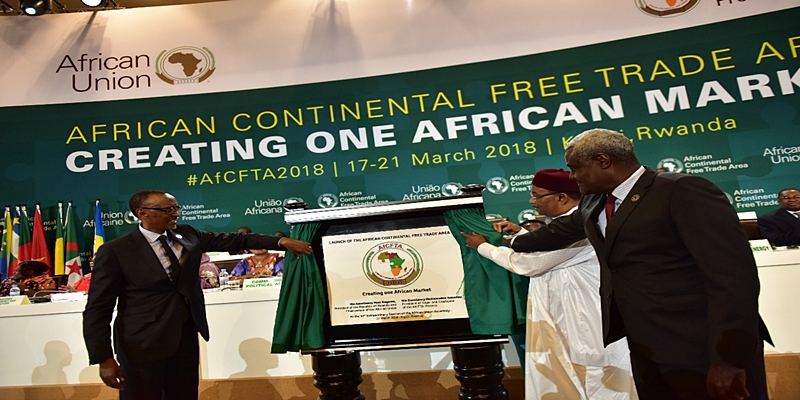 In the energy-sapping miasma of a virus-infected world, the launch of the world’s biggest free trade area, the African Continental Free Trade Area (AfCFTA), feels exhilarating. Right now a lot of us are struggling to conceptualise what next month looks like (hint: it involves sweatpants), but suddenly here is a 50-year grand strategy for Africa’s market.

On the first day of January this year, a 58-year dream fostered by the Organisation of African Unity (OAU) came full circle as the implementation of the AfCFTA took off. The AfCFTA is an exciting game changer. Currently, Africa accounts for just 2% of global trade. And only 17% of African exports are intra-continental, compared with 59% for Asia and 68% for Europe. The potential for transformation across Africa is therefore significant. The pact will create the largest free trade area in the world measured by the number of countries participating. Connecting 1.3 billion people across 55 countries with a combined gross domestic product (GDP) valued at $3.4 trillion, the pact comes at a time when much of the world is turning away from cooperation and free trade.

The agreement aims to reduce all trade costs and enable Africa to integrate further into global supply chains – it will eliminate 90% of tariffs, focus on outstanding non-tariff barriers, and create a single market with free movement of goods and services. Cutting red tape and simplifying customs procedures will bring significant income gains. Beyond trade, the pact also addresses the movement of persons and labour, competition, investment and intellectual property.

Not an easy road ahead

Hard work nevertheless awaits in the implementation of the pact and it will be no walk in the park. Proponents of the continental trading bloc have already agreed that the implementation of AfCFTA will not only be hard but also a long and winding road ahead. While the bloc is a bold move towards boosting intra-Africa trade including Pan-African private sector, small and medium enterprises, women and youth-led businesses, tens of challenges exist to this plan.

Among the challenges facing the drive include poor infrastructure, trade tariffs, the large informality of businesses, regional-based conflicts and wars and barriers to entry and slow executions. Trade barriers represented largely by non-tariff barriers (NTBs) however represent the greatest challenge to realising AfCFTA ambitions. This challenge goes above and beyond the current strain brought by the Covid-19 pandemic and has to date been the biggest hindrance to intra-African trade.

So far, African states have only completed negotiations on rules covering 81 per cent of products while the States are expected to follow through negotiations of the remaining 19 per cent of products by July 2021. Nevertheless, the trading partners are yet to clear up key trading guidelines including rules of origin, which not only define where a product was made but also dictates other trading preferences including quotas and anti-dumping measures.

Also key to the desired integration will be the enhancement of connection for both persons and goods. Today, travelling from Mauritius to overseas hubs such as China and Dubai is far less simple and cheaper compared to connecting to some parts of Africa. This is as intra-Africa travel is tied to high costs including air and freight tickets. To boost trade, individuals and goods must be allowed to move with ease across borders with little to no restrictions.

With nearly three-quarters of all intra-Africa trade being informal, loose restrictions to market access will be of essence to lifting the stock and value of trade. Complementary initiatives such as the Single African Airport Transport Market (SAATM) under the African Union Agenda 2063 might be the game changer to increasing and enhancing connectivity between countries.

Endeavours to create a liberalized aviation market which is seen as a central piece of the jigsaw in boosting connectivity both to enhance intra-Africa tourism, investments, people entrepreneurship and employment opportunities and resulting, will create amazing brands and new market leadership. It is essential to note that in the quest to connect East Africa, Air Mauritius has heavily failed to continue its operation in Tanzania and Mozambique. Individuals and goods must be allowed to move with ease across borders.

Thirty-four countries across the continent have already signed up for the single aviation market representing 80 per cent of Africa’s aviation market. Mauritius has not given any sign since March 2020 if they will join the pact or not. Post Covid-19, whereby most national carriers are struggling big time, with heavy losses and almost no flights, there is no way out except joining the SAATM. The aviation business has great opportunities, and Mauritius can gain from moving health specialists, perishable goods and flowers plus the development of talent training in the region.

African leaders have nevertheless come to terms with the tough journey ahead even as they express beaming optimism to the realisation of the continent’s integration. President Uhuru Kenyatta has been driving the Africa integration and encouraging the growth of trade in the region. While speaking at a ceremony to officially kick-off AfCFTA, Ghanaian President Nana Akufo-Addo said there was a sense of urgency and purpose for Africa to become self-reliant. The growth in Africa needs all countries to team up, both from the private and public sectors to make the continental agreement have milestones of success, and we all must create more business and employment for the ambitious and talented youth of Africa.

The role of Mauritius in AfCFTA

The damage caused by the most recent curtailment of economic freedom – the Covid-19 government lockdowns – cannot be underestimated. The World Bank projected that the number of people in extreme poverty would increase by up to 115 million, which would mean a total of 703 to 729 million.

After the ravages of Covid-19 and government-imposed lockdowns (the number of people unemployed in Mauritius is now more than 100,000), many countries will be tempted to turn inward, to limit their interactions with neighbours and people – but nothing could be worse. For any noteworthy economic recovery (never mind meaningful growth) to occur, the world needs more trade, not less.

No amount of state stimulus will generate the kind of economic growth needed to lift people out of poverty. Indeed, you cannot stimulate an economy that is not allowed to operate in the first place. Only more economic freedom, through avenues such as trade, can actualize people’s economic potential.

Mauritius’s inability to take advantage of the US designed African Growth and Opportunities Act (AGOA) might be pointer to the country’s ability to take advantage of AfCFTA. The AGOA project initiated by the United States of America in the year 2000 was to help develop trade and facilitate exporting numerous goods into America with no tariff. The trade agreement primarily set out to galvanise the African economy. However, as per the AGOA Info website, the treaty has been underutilised by Mauritius. Though AGOA programme has been on for the past 20 years, Mauritius has never taken full advantage of the potentials specially; the SMEs are the ones never aware of the potential benefits.

It is going to be pertinent if Mauritius responds to the opportunities presented by AfCFTA by designing policies and promote market access for Mauritius’ exporters of goods and services, spur growth and boost job creation. In order to tap on the vast areas of potential opportunities awaiting the manufacturing, financial, education as well as marine sectors, Mauritius has to express keen relevance to the AfCFTA.

However, one major question remains! Who will drive the AfCFTA strategy for Mauritius? For 20 years post-AGOA, Mauritius has miserably failed in Africa. May it be MAF, Smart Cities in Africa, African Airline Corridor and the latest one in 2019, State Bank of Mauritius miserable failure in Kenya. Only more economic freedom, through trade, can actualize people’s economic potential.

With the high-level political momentum around the AfCFTA, its ultimate success will depend on African states not only ratifying but also fully implementing and complying with the AfCFTA, while investing in the necessary enablers. We need to have a strong Mister Africa who has lived in the continent, understands the markets, knows the cultural, language and political barriers and can put up a realistic and realisable African strategy in place. He needs to spur the industrialisation of the country by providing an expanded platform for local manufacturers and service providers for connection to regional and continental value chains, improve competitiveness, and stimulate increase in exports of goods and services across the continent. With the help of the government, he must also provide a platform for small and medium enterprises’ integration into the regional economy and accelerate women’s empowerment.