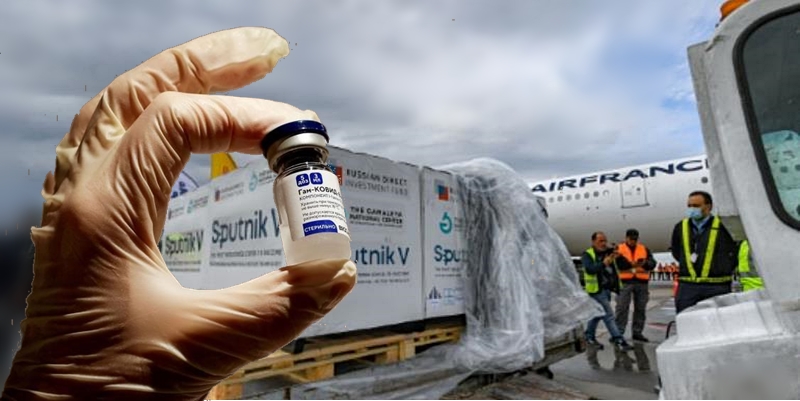 More and more African countries are registering Russia's Sputnik V vaccine. The Russian Direct Investment Fund (RDIF) said in a statement that more than ten (10) African countries have officially authorized Russia's coronavirus vaccine Sputnik V for mass use to fight the COVID-19 in their respective countries.

This effort aims at stopping further spread of the pandemic on the continent. The Sputnik V has been registered under the emergency use authorization procedure.

Reportedly, the vaccine has been registered in Algeria, Angola, Djibouti, Egypt, Gabon, Ghana, Guinea, Kenya, Morocco, Namibia, Tunisia, the Republic of Congo (DRC) and Zimbabwe. In all, the Russian vaccine has been approved for emergency use in more than 50 countries across the world.

Before Sputnik V was approved and registered in August 2020, Africa leaders were banking hopes on Russia for assistance to fight the pandemic. While opening negotiations with the foreign ministers of the African Union's troika (the Democratic Republic of the Congo, Egypt and South Africa) as far back in July 2020, Foreign Minister Sergei Lavrov indicated that over 30 African countries requested for Russia's assistance in fighting the coronavirus infection.

He explained, the transcript posted to official website, that these requests would be implemented on bilateral basis, and that an agreement has been reached on continuing the efforts for rendering assistance in the anti-coronavirus fight, including through international structures, both African and global.

Russia's drive to share Sputnik V vaccine, of course, offers a chance to raise its image and strengthen alliances in Africa. Ministry of Foreign Affairs has made efforts promoting the vaccine using all its channels. Tunisian Prime Minister Hichem Mechichi and Russian Foreign Minister Sergey Lavrov agreed at phone call March 2 to speed up the delivery of COVID-19 vaccines - Sputnik V. They also agreed on increasing efforts for fruitful cooperation in combating coronavirus.

Tunisia received its first major delivery of coronavirus vaccine doses March 9, almost a month later than expected, paving the way for the start of its inoculation campaign. It lags behind regional peers Morocco and Algeria - both started their vaccination campaigns late January.

According to reports, Health Minister Faouzi Mehdi was on hand for the delivery of 30,000 Sputnik V doses in Tunis. The government has purchased a total of 500,000 Sputnik V doses. Tunisia has officially recorded more than 238,000 novel coronavirus cases and over 8,200 deaths.

In a related development, Minister-Counsellor at the Embassy of the Russian Federation in Mozambique, Alexander Nuralov has also hinted in Maputo that Russian (Russian Ministry of Sports) is considering vaccine donations, it plans to supply doses to athletes from all African countries. According to Mozambican Investor, Nuralov revealed this information after a meeting with Mozambican Secretary of State for Sports, Carlos Gilberto Mendes and President of the Mozambican Olympic Committee, Aníbal Manave.

"This is a Ministry of Sports plan to help sports people on the African continent, while at the same time internationalizing the Sputnik-V vaccine," Minister-Counsellor Nuralov said, to which Secretary of State Carlos Gilberto Mendes replied that the Russian gesture was further proof of the long-standing friendship between the peoples of Russia and Mozambique.

The Medicines Control Authority of Zimbabwe has authorized the use of Sinopharm and Sinovac shots from China, Russia's Sputnik V and India's Covaxin, the Information Minister Monica Mutsvangwa said in a post-Cabinet briefing. All the approved vaccines will be procured through the National Vaccine Procurement Fund managed by the Ministry of Finance and Economic Development of Zimbabwe.

According to Associated Press report published March 7 says millions of doses are expected by countries in Latin America, Africa, the former Soviet Union and the Middle East in a new wave of Russian vaccine diplomacy. Whether Russia can deliver is another question. China has supplied millions of doses to other countries, but the output of Sputnik V appears for now to be far lower than the demand.

Arguably, some experts say boosting the use of vaccines from China and Russia could offer a quicker way to increase the global supply. Others note that Russia wants to score geopolitical points. Besides supplying through bilateral agreement, Russia has offered to supply 300 million doses of its Sputnik V vaccine to the AU scheme along with a financing package. It promised to make delivery only in May.

Promising more than can be delivered appears to be a universal problem with coronavirus vaccines, and it is a real risk for Russia as well, said Theresa Fallon, Director of the Brussels-based Centre for Russia Europe Asia Studies. "They have won the gold medal for creating this very effective vaccine," she said. "But the problem is how are they going to implement it?"

On the other hand, Russia could be filling in the gap where vaccines remain scarce. That means, in order to save lives it has to delivery promptly and with the same speed as it registers the vaccine around world. China and India are also vying for global influence by distributing vaccines to low- and middle-income countries. As well-known, India is home to one of the world's largest vaccine manufacturers, the Serum Institute of India, as well as other vaccine companies producing candidates.

Kirill Dmitriev, CEO of the Russian Direct Investment Fund, said: “A new major milestone reached today for Sputnik V with 50 countries having approved the Russian vaccine, which is already saving lives and preventing the spread of coronavirus.

"RDIF is joining efforts with partners in every part of the world and offers one of the best vaccines in terms of efficacy, safety and affordability. We see strong demand and do our best to meet it so that more countries could protect their population with Sputnik V."

"Total population of 50 countries where the Russian vaccine is approved for use exceeds 1.3 billion people. Sputnik ranks second among coronavirus vaccines globally in terms of the number of approvals issued by government regulators," the statement added.

According to an official release obtained late February, the Sputnik V vaccine the following advantages:

• Efficacy of Sputnik V is 91.6% as confirmed by the data published in the Lancet, one of the world's oldest and most respected medical journals; It is one of only three vaccines in the world with efficacy of over 90%; Sputnik V provides full protection against severe cases of COVID-19.

• The Sputnik V vaccine is based on a proven and well-studied platform of human adenoviral vectors, which cause the common cold and have been around for thousands of years.

• Sputnik V uses two different vectors for the two shots in a course of vaccination, providing immunity with a longer duration than vaccines using the same delivery mechanism for both shots.

• The safety, efficacy and lack of negative long-term effects of adenoviral vaccines have been proven by more than 250 clinical studies over two decades.

• The developers of the Sputnik V vaccine are working collaboratively with AstraZeneca on a joint clinical trial to improve the efficacy of AstraZeneca vaccine.

• There are no strong allergies caused by Sputnik V.

• The price of Sputnik V is less than $10 per shot, making it affordable around the world.

In February, peer-reviewed medical journal The Lancet published an interim analysis from Phase III clinical trial of the Russian vaccine, showing its 91.6-percent efficacy against symptomatic COVID-19. Developed by the Gamaleya Research Institute of Epidemiology and Microbiology, Sputnik V was the world's first officially-registered vaccine against COVID-19.

Russian Direct Investment Fund (RDIF) is Russia's sovereign wealth fund established in 2011 to make equity co-investments, primarily in Russia, alongside reputable international financial and strategic investors. RDIF acts as a catalyst for direct investment in the Russian economy. RDIF's management is based in Moscow.

As Russia makes its headway into Africa, about 20 African countries have already received vaccine consignments from the COVAX initiative during February and March. The COVAX initiative aims to deliver at least 2 billion vaccine doses this year, including 1.3 billion doses to lower income countries. This is due to the fact that these countries have lagged behind in the scramble for vaccines and welcomed donations from friendly governments.

The United Nations' Children's Fund (UNICEF) has urged countries to contribute more money to help poor countries access coronavirus vaccines, saying around $1 billion was needed. That funding could be used strengthen health systems in poorer countries and support the distribution of vaccines there. UNICEF, the world's single largest vaccine buyer, is part of the World Health Organization-backed COVAX programme.

Dr. Tedros Adhanom Ghebreyesus, Director-General of the World Health Organization has acknowledged that the pandemic has struck at a time of rapid transformation for Africa. According to Adhanom Ghebreyesus, it takes a whole-of-government, whole-of-society approach, and explicitly added that "many African countries have low levels of coverage of health services, and when health is at risk, everything is at risk."

The author is a versatile researcher and a passionate contributor, most of his well-resourced articles are reprinted elsewhere in a number of reputable foreign media.

This article has been read 478 times
COMMENTS