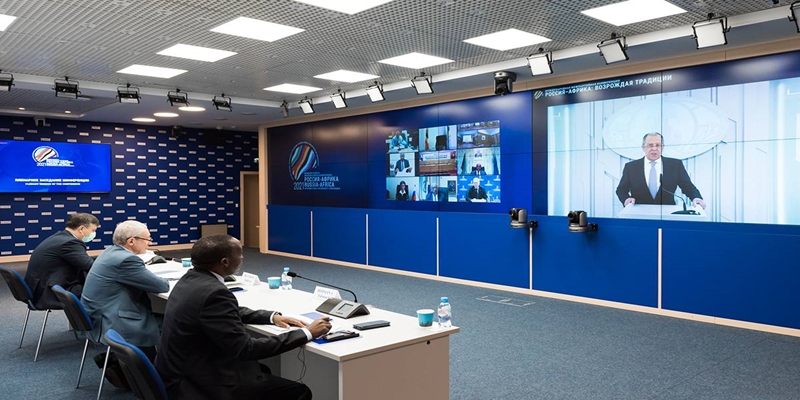 Over the past few years, Russia's sphere of influence in Africa has been strengthening and broadening with much focus on helping to maintain peace and security, and making investment in exploiting natural resources in Africa. The first historic Russia-Africa summit held in October 2019 has, further and concretely laid out a comprehensive roadmap with which to forge future relationship with the continent.

Within that framework, the United Russia Party organized and hosted the Russia-Africa inter-party conference on March 24 - 25. Held under the theme "Russia - Africa: Reviving Traditions," the primary aim was to generate discussions and share views on multifaceted developments with Africa. It was also part of the activities preceding and preparations for the second Russia-Africa Summit planned for 2022.

Senator Andrei Klimov, Deputy Secretary of the General Council of the United Russia Party of the Russian Federation, moderated the conference that included the participation of African Heads of States such as Angolan President, Lourenço João, Prime Minister of the Federal Democratic Republic of Ethiopia and President of the Prosperity Party, Abiy Ahmed Ali, just to mention a few. Leading African parliamentary parties, academics and experts as well as the media participated.

Senator Klimov said the conference was crucial to exchange ideas between parties, strengthen relationships and develop mutual understanding in multifaceted spheres. The conference focused on peace and security, counter-interference, inter-party support for economic cooperation, humanitarian cooperation and other related issues.

President Vladimir Putin’s transcript of official greetings to the participants read in part: "On the agenda are such important issues as ensuring peace and regional security as well as countering interference in the sovereign states' domestic affairs, reinforcing economic and humanitarian ties and, of course, joining efforts in combating the COVID-19 pandemic."

The statement offered assurance that Russia would continue to share the experience, supply effective vaccines and provide comprehensive medical care. Putin noted that the first Russian-African summit held in October 2019 gave an impetus to cultivating friendly ties between the countries.

Putin continued: "I hope that the international conference initiated by the United Russia party will not only make a significant contribution to enhancing inter-party cooperation but will also become one of the stages of preparation for the second Russia-Africa summit, scheduled for 2022."

Dmitry Medvedev, the Chairman of the United Russia party and Deputy Chairman of the Security Council of the Russian Federation, noted that "the development of close ties, at all levels, meets our common interests and contributes to the sustainable growth of our states, raises the living standards of people."

The Chairman of the party, however, expected that the inter-party conference would offer a platform for significant contributions to solving the tasks outlined at the end of the first Russia-Africa summit and would further become an important stage in the preparation of the next summit, scheduled for 2022.

"I would like to wish all the participants of the inter-party conference successful and fruitful work, strengthening partnership and mutual understanding between our states," Medvedev added, declaring the conference open.

Foreign Minister Sergei Lavrov, reiterated that Russia-African relations primarily rest on an understanding of the importance of collective action based on the principles of equality, mutual respect and resolving common tasks.

In the past few years, Russia-Africa cooperation has been noticeably strengthening. "We are deepening our political dialogue, developing inter-parliamentary ties, promoting cooperation between ministries and departments and expanding scientific and humanitarian exchanges. We are also continuing the structural diversification of our trade," he said.

After the first Russia-Africa summit held in October 2019, his ministry has created the Secretariat of the Russia-Africa Partnership Forum. The coordination, public and scientific councils have been established under its aegis. The Association for Economic Cooperation with African Countries has been created, uniting large Russian companies operating in African markets. Experts plan to draft roadmaps of Russia-Africa economic, scientific and humanitarian cooperation.

Lavrov further explained that it is becoming a tradition for Russia-Africa summits to be preceded by events in different fields of cooperation. The Russia-Africa public forums held at the end of the past year helped strengthen academic, cultural and youth links. African issues will be included in the St Petersburg International Economic Forum scheduled for next June. A regular meeting of the foreign ministers of Russia and the African Union trio is planned for next year as well.

Ethiopian Prime Minister Abiy Ahmed urged both Russia and Africa to solidify their time-tested solidarity in and stand firmly against interference. He underscored the role of political parties in fostering domestic political stability and international cooperation.

"We must revisit our traditions and solidify our friendship and renew our time-tested solidarity in order to respond to basic demands of our people to defeat the enemies within by standing against interference," the premier stressed. Russia was a key ally in continental independent movements and against oppression, colonialism and slavery, both domestic and foreign, that have produced leaders and intellectuals, he stated.

In a message sent to the Russia-Africa inter-party conference, João Lourenço, leader of the ruling MPLA party called for a broader investment and diversified cooperation with Africa in sectors such as industry, agro-livestock, fisheries, energy, tourism, telecommunications, science and technology.

João Lourenço further considered important the development of the relations between the African countries and the Russian Federation, as well as between the political parties, which have the responsibility of defining the policies that guide the action of the respective governments, to face the enormous challenges that are faced today.

Nearly all the African participants acknowledged that the mutually beneficial cooperation between Russia and Africa was an important factor to building an equitable international order. They also noted party support for economic cooperation.

Boris Gryzlov, Chairman of the Supreme Council of the United Russia party, stressed that the inter-party conference would contribute to the expansion of multifaceted ties between Russia and Africa. He urged for commitment to further interaction, particularly on the development of joint projects in the field of economics and technology.

United Russia intends to provide assistance to Russian business circles ready to work in the Africa. It has agreements on interaction and cooperation with the Zimbabwe African National Union - Patriotic Front (ZANU-PF), the Gabonese Democratic Party, the Congolese Labor Party, the Ethiopian Prosperity Party, and the People's Movement for the Liberation of Angola.

ZANU-PF Foreign Relations Secretary, Simbarashe Mumbengegvi stressed the importance of developing inter-party dialogue within the framework of cooperation between Russia and Zimbabwe. He expressed hope that the relationship between United Russia and the Zimbabwe African National Union would develop dynamically. The Secretary of the Gabonese Democratic Party, Eric Dodo Bungenza, thanked United Russia for organizing and holding the international conference "Russia-Africa: Reviving Traditions."

Andrei Klimov, Deputy Secretary of the General Council of United Russia, Chairman of the Presidium Commission on International Activities, said that "the preparations for the conference stimulated the process of concluding cooperation agreements between United Russia and a number of ruling parties in Africa. This contributes not only to the effective holding of the March conference, but also to the long-term cooperation of our party with all parliamentary parties of the African continent."

Delegates from about 50 leading African parliamentary parties, heads of state and ministers took part in the work, and more than 12.5 thousand people from 56 countries around the world watched the discussions.

The author is a versatile researcher and a passionate contributor, most of his well-resourced articles are reprinted elsewhere in a number of reputable foreign media.

This article has been read 352 times
COMMENTS