Tigray: Guarding Against Continuous Onslaughts Since 1889 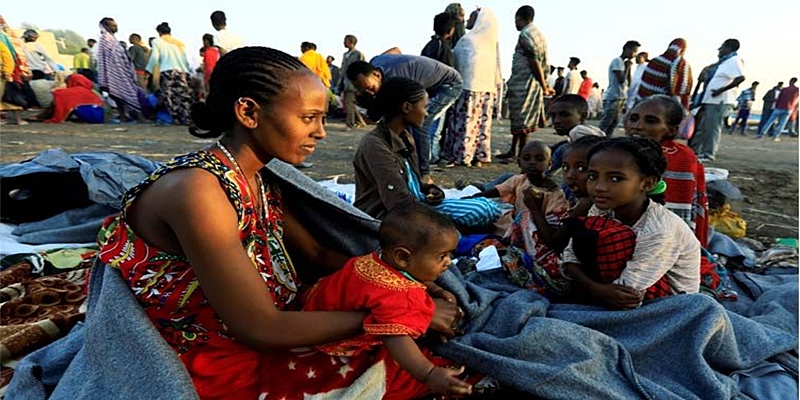 People become more vulnerable to any next attack if they consider the series of attacks as isolated incidents triggered by passing emotions. The invasion of Tigray and the untold brutalities that followed have alarmed any sane minded human being, except those who are literally in a huge lunatic asylum called Ethiopia. A key question for the prognosis of the catastrophe must be: Is this a terrible hiccup or a next higher phase of malignancy? The medical analogy can be taken as perfect because local twitches in the nervous system resulting in long and painful hiccups are similar to conflicts, which could turn out to be very bad, but are caused by temporarily elevated emotions and lack of proper communication. This does not arise from any underlying grudge or deep-rooted hatred. Such conflicts happen so unfortunately that the only remedy is to stop them, forgive and forget.

One could tell an extended story of the similarity between Tegaru and Amhara in religion, culture, history, physical appearance, and so on. This is a convenient premise for the wrong conclusion that the war between Tegaru and Amhara is an avoidable fratricide, just a passing hiccup. The killing is bad, but the reason is glorious. Who wouldn’t want to get the love of a father entirely for oneself?

It will be the most insensitive evasion of the history of Tegaru in Ethiopia to ignore every invasion they suffer, in the hands of Amhara Rulers at the Center, as a tragic family story of Cain and Abel. In the middle of the massive gang-rape, wanton killing of civilians, the destruction of the regional economy and the livelihoods of communities in Tigray, those locals that have joined hands with the invaders dare to say, “Amhara are our brothers and sisters”!

The most recent multipronged invasion of Tigray is the most the most barbaric, but it is the latest of the four campaigns launched on Tigray, from 1889 to 2021, all aimed at making it unviable as a nation. The four campaigns are only the most glaring; but there have been countless offenses on Tigray as a political entity and on Tegaru as individuals or groups. The first happened in the Menilik era (Campaign I); the second during Haile Selassie’s reign (Campaign II); the third during Mengistu-lead Junta rule (Campaign III); the fourth and the ongoing is launched and executed by the axis of evil: Prosperity Party-Amhara Hegemons-Eritrean Dictatorship (Campaign IV).

1. Treasonous use of foreign power in the campaigns

i.  Campaign I: Menilik allied with Italian colonial forces against Yohannes IV and got 30,000 guns and 28 cannons to subdue Tigray and use it for the expansion of his empire in the south, west and east.

ii.  Campaign II: Haile Selassie used British Royal Air Force to crush the Woyane rebellion and killed hundreds of civilians in the central market of Mekelle and elsewhere in Tigray

iii.  Campaign III: Mengistu used Russian support as military advisors and suppliers of sophisticated weaponry to crush the TPLF and to bombard and shell civilians all over Tigray.

iv.  Campaign IV: Abiy involved tens of divisions of ground forces and air support from Eritrea, commandoes from Somalia, and drones from the United Arab Emirates. Eritrea’s involvement in the war in Tigray was unprecedented because it took the leadership role in designing the entire operation in which Abiy and his generals only played the “second fiddle” in a Country they call their own and, on a people, formally registered as Ethiopian citizens. Abiy had wanted to involve Sudan, in the war in Tigray on his side. Sudan was expected to assist the invasion by closing its borders for the defenders of Tigray. Sudan did the opposite of what it was expected to do and became the only reliable host for tens of thousands of Tigrayan refugees. This is something that will happily be remembered by Tegaru into eternity.

2.Use of political geography as a tool to enfeeble

i.  Campaign I: Menilik ceded the Red Sea littoral portion of Tigray to the Italians, planting a permanent geopolitical thorn in the flesh of Tigray. This action helped him to prevent any armament shipment to Tigray and any economic benefits from the trade route from the Ethiopian interior via Tigray to the Red Sea. The least mentioned Article 3 of the Wuchale Treaty, which has been evaded for a century, has helped Menilik to seal the fate of the heirs to the throne of Yohannes IV and continue with the empire building in the south, west, and east. The distant ports of Massawa and Assab were more useful for Tigray than for the center of the Empire: Addis Ababa. Djibouti was more convenient and safer to use for the Shoa-centered Abyssinia.

ii.  Campaign II: Haile Selassie penalized Tigray by awarding huge and fertile territories in the west and south to Gondar and Wello respectively. This helped Haile Selassie to significantly reduce the tax-base and the food producing capacity of Tigray.  For Haile Selassie this was a final blow to the reluctant vassals in Tigray.

iii.  Campaign III: Mengistu retained the provinces regionalized during the Monarchy until 1987; but with the intensification of the TPLF-led armed struggle he felt that the land area size of Tigray has to be further diminished. When creating an “Autonomous region of Tigray” (Ras Gez) to “resolve” the national question Mengistu took away the Danakil eastern half of Tigray and incorporated it with the new Assab autonomous region (Ras Gez).

iv.  Campaign IV: Abiy facilitated the invasion of western and southern Tigray by the Amhara Militia who claimed the land as taken away from them by the Federal Arrangement of 1995. The forced colonization of Eritrea in Campaign I has served Campaign IV in which the former kins of Tigray were transformed into more brutal collaborators against it.

3. Laming native political leadership and the role of proxies in Tigray

i.  Campaign I: Menilik effectively rendered the nobility in Tigray too weak to challenge the Crown. Heir to the throne of Yohannes IV, Menegesha Yohannes died in prison; the great Tigrayan general Alula was reduced to a pet in Menilik’s court; Gebre Selassie of Adwa served Taitu in Addis Ababa. The remaining members of the Tigray nobility had more time devoted for fighting one another than challenging the legitimacy of the Crown at the Grand Palace.

ii.  Campaign II: Haile Selassie continued to appease Tigray by assigning natives to its governorship. However, the appointees were shackled by marriage vows to their spouses who have blood relations with the Crown. Mengesha Seyoum, the great grandson of Yohannes IV, wedded to the granddaughter of Haile Selassie, had more than five great grandsons and daughters of the Emperor.  Would Mengesha Seyoum lead a rebellion against the great grandfather of his own children? He also jailed Blatta Hailemariam Reda, the leader of the first Woyane for life in Arba Minch so far away from his people. Any sign of descent from any member of the nobility was never tolerated. When the son (Aba Yilak Kassa) of the enfeebled governor of Tigray, Seyoum Mengesha, grew rebellious against the Crown his own father surrendered him to the crown to be killed. This was the power of the political anesthesia injected into the veins of the key members of the Tigray nobility.

iii.  Campaign III: Mengistu assigned Colonel Kale Kiristos and Mulugeta to govern Tigray. In reality they were just figure heads devoid of any real power. Representatives of the Derg and political cadres exercised more power; but the power to kill and cripple their fellow Tegaru. Protecting Tegaru was not in their job description; hunting and destroying anyone suspected of involvement with TPLF was. Mass murderers of Tegaru like Desta Tadesse and Belay Berhe were killed by Mengistu after they successfully completed the mission!

iv.  Campaign IV: Abiy did not have a chance to put proxies in Tigray before the end of 2020. Tigray had leaders of its own in a federal arrangement that legitimized self-rule; the outcome of the long and arduous struggle wedged by Tegaru. Following the invasion of Tigray, a transitional government is installed at Mekelle, while the elected government of the people is out and about in the cozy fold of its rural constituency. The alien proxy constituting of a retired army general (Yohannes) and a university professor (Mulu Nega) are Tegaru only by birth. In their homeland among their own people, they have become more “catholic than the pope” at Arat Kilo. They are doing the more damaging psychological harm to their fellows than the physical harm the sworn enemies of the people are inflicting.

4.Using hunger as a weapon in Tigray

i.  Campaign I: Menilik in collaboration with Italian colonial forces wrecked the food production system of Tigray both as a separate campaign to impoverish and as a supply source for the war effort.

ii.  Campaign II: Haile Selassie refused to send food aid to the hundreds of thousands of victims of drought-induced famine in Tigray both in 1958 and 1973.

iii.  Campaign III: Mengistu refused to distribute food aid to victims of drought-induced famine in Tigray in 1984-85. It was a dreadful action intended to weaken the support-base of TPLF. Hundreds of thousands of victims died of starvation and communicable diseases, while the demons in Addis Ababa were celebrating the foundation of the WPE.

iv.  Campaign IV: Abiy turned a blind eye to the blocking of highways leading to Tigray aimed at denying it access to the food market outside Tigray. When swarms of locust invaded Tigray support to fight the invasion was brutally denied. While the catastrophic invasion of Tigray was in full swing, four million people were held hostage by starving them to force the surrender of the TPLF leadership. In a tragic death of logic TPLF leadership was expected to surrender to save its people from starvation, as if these cruel invaders would provide food to the people after the surrender! It was already very clear that the target of the invaders is not only TPLF leaders but the entire population of Tigray as a mass base of TPLF. They know very well that as long as the people of Tigray remain intact, they are capable of producing more talented leaders. The surrender of even all TPLF leaders does not effectively end the fight of the people for freedom. It could only delay it.

The billion-dollar question is: Will there be Campaign V in Tigray at some point in the future? The answer is a big “Yes” if the people of Tigray dangerously lapse back to their bad habit of forgiveness. Campaign I was followed by II, and II by III and IV because the deceptive good manners of the invaders and their supporters have been lulling Tegaru into sleep while the enemy prepares and looks for a weak point to attack Tigray again. The only way Campaign V can be avoided is self-censure about past negligence that resulted in a series of damaging invasions. It is crucial to understand that the four campaigns are aimed at the same thing: to render Tigray unviable. If it refuses to be unviable the campaign series will continue in other more severe seasons and episodes. If Tigray survives Campaign IV. Sure, it will, it will never survive Campaign V. If there is any Tigrayan that doubts that Campaign V will ever happen, it must be harboring a bitter hate for his own people. So, what would facilitate Campaign V? The answer is the forgetfulness, the negligence, the fatal kindness, and suicidal forgiveness of Tegaru!!!!

This article has been read 510 times
COMMENTS