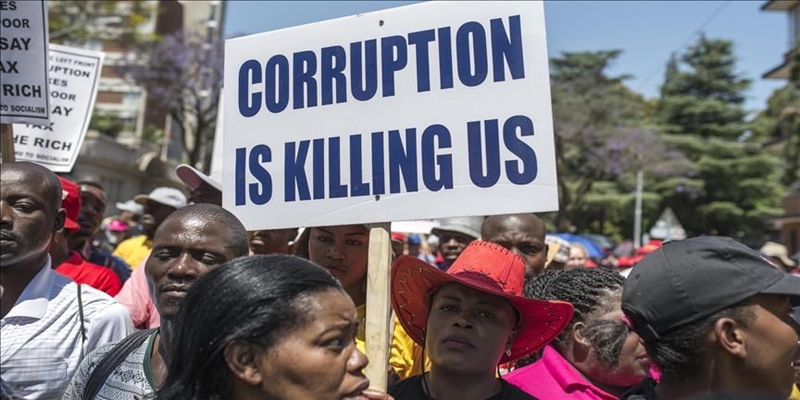 Definition of corruption
Corruption exists on every level in every country on planet earth. It has existed since before oldest recorded annals. A simple definition of the term ‘corruption’ is:  a form of dishonesty or criminal offense undertaken by a person or organization entrusted with a position of authority, to acquire illicit benefit or abuse power for one's private gain. Corruption may include many activities including bribery and embezzlement, though it may also involve practices that are legal in many countries.

In politics, corruption occurs when an officeholder or other governmental employee acts in an official capacity for personal gain. Corruption is most commonplace in kleptocracies, oligarchies, “narco-states and mafia states” (emphasis mine).1

There are two important points worth taking a closer look in the definition of corruption above. First, “dishonesty or criminal offense.” Second, “practices that are legal in many countries.”

When corruption is defined as dishonesty or criminal offense, it falls into the same category as theft, white-collar crimes, organized crime, and or treason. Corruption is therefore punishable under law. How the laws in each country take on corruption varies greatly and takes us to the second point regarding some corruption practices being legal in many countries. Being legal does not make it right. Laws are set by humans and often set to protect the same people creating the laws. We have some glaring examples in history, of legal activities not being morally correct, notably the holocaust in Germany during WWII, the slave trade in US during the first 100 years of the Union, and more.

The faces of corruption

Corruption has three faces. The one who corrupts, the one being corrupted and the victim. There is always a victim in the equation. The first two play an equal part in the act, although the two may not necessarily have equal standing. Often one has the ability to intimidate or coerce the other into being a part of the scheme.

Although the corrupter and the corrupted have this equal share in the act of corruption, humans seem to be biased toward the latter. A person who receives a bribe, takes it, accepts it, is looked upon with more contempt than the person paying the bribe. This is a mistake. They are equally bad.

The one often forgotten is the victim. The anonymous and faceless someone in the crowd. The victim does not have a voice and as anonymous may not even know he is being cheated on or that he is paying for someone’s crime. The victim can be more than one, various individuals, group of people, company, companies, union, towns, or cities. In many cases, even a whole nation can be the victim of corruption.

Unfortunately, when a nation is the victim, everyone competes to come up with justifications for the corrupted deal, why it was necessary and how it benefits the victim. A whole nation may rise up in support of corruption as happened in the USA after 9/11 with the, then, proposed invasion of Iraq. Corruptors were able to use the tragedy of 9/11 to lie and lead the nation into a baseless war in which everyone lost except few weapons manufacturers and corrupt politicians. Only 4 republicans voted against the war. There was overwhelming support (over 70% according to Gallup) for it. The US lost over 2.4 trillion of taxpayer money in the war and over 4,490 dead.

However, these losses are insignificant when compared to the losses of the Iraqi people. Official numbers are 150,000 dead (that is casualties of war), a very low estimate, not including any direct or indirect civil deaths caused by the war.

It is hard to find data on financial costs carried by the people of Iraq, but I believe it is fair to say they have forgone any economic benefits for 20 years and will be paying for this for another 40 to 100 years to come.

Although it is often said that one nation or a culture is more prone to corruption than another, there is no evidence to support this. There is a difference between countries when it comes to corruption.2 This has little to do with the culture in each country, but more with the different situations affecting the population of different countries.

Let us look at the cause for corruption. A simple search will give long list of causes, including decline of personal ethical sensitivity, no sense for service, lack of courage to denounce corruption, cultural environment, lack of transparency, inefficient regulation, and controls, slow or ineffectual judicial process, lack of moral criteria, government effectiveness, GDP per capita, and the list goes on and on.

However, when you look closely at each of these factors, you can start dividing them into two related categories, fear, and greed. Fear is primarily caused by uncertain future. Uncertain in terms of economic stability or in the worst case uncertainty about own safety or even life. Greed is a response to uncertainty. I need to take the opportunity now since I can know what tomorrow will bring. Greed also exists in its pure form, that is, selfish desire for wealth and/or power.

In reality, there is no evidence that one culture is more prone to corruption than another. In his book, Kicking Away the Ladder, Ha-Joon Chang, tells a story of an English businessman traveling to Germany and Japan in the 18th century. After visiting both countries, the gentleman did not give much for either culture. He referred to them as a “lazy and thieving bunch.” That is hardly a description that comes to mind when discussing either Germany or Japan. The fact is situation has changed in both of these countries. If either population would inherently be lazy or thieving, the changed situation would not have brought about change in behavior.

It is easy to judge and point fingers when a disagreeable situation is observed. Under the surface, however, are always some underlying causes, hard to see and difficult to understand. To improve the situation, these causes must be pulled up onto the table and dealt with.

What to do about corruption

Others, like the Inter-American Development Bank, have additional items on their lists as to how to tackle corruption. In my humble opinion, they all fail in addressing the two primary causes for the corruption: fear, and greed. You will not find on any website or brochure dealing with corruption any mention of fear or greed when they talk about solutions. If the causes are not dealt with, the action is only a dress-up.

Back to Germany and Japan. When the Englishman was traveling through these two countries in the 18th century, there was no international body dealing with corruption, or “cultural” problems such as pathological lying or thieving. There were no forums where people were able to express themselves or get advice on how to address such issues. One wonders why these characteristics do not still apply to Germany and Japan today. Maybe one can find the answer in the social changes that took place in these countries during the las quarter of the 18th and into 19th century.

Strengthening the legal system, transparency, or administration of a government to combat corruption seems to be futile effort if the government is the principal culprit of corruption. It is not likely that a government will start punishing itself for crimes when they receive direct benefit from committing these same crimes. Here we come to a key ingredient in this conversation, punishment. Every time corruption is mentioned, the question is if it is being punished, and if so, how severely.

While laws are necessary and the penal code is important, punishment has never solved anything. Punishment does not work as a deterrent on drugs in the US, on petty theft in the cities of Europe or smuggling or graffiti around the world. The only thing affected by the punishment is the person receiving it and the price of the goods in question goes up.

What is the alternative then? While the penal code and punishment will continue, prevention must be taking place as well. Starting with the education system. Children go through the education system without learning about the value of anything. They know the price of everything but value of nothing. Ethics, social/community services, mutual assistance is something students may read about in books but just like carpentry or medicine, is not worth much without practice.

In New York, an interesting experiment was conducted. When one of the worst, most dangerous, neighborhood was cleaned up, painted, and made beautiful, the rate of crime in the area went down immediately. Why? The answer is simple. Fear was taken out of the equation. Corruption thrives on insecurity and fear. If we deal with the fear, the greed can easily be dealt with later. Greed unfortunately is built into our human DNA.

When all the small things have been taken care of, and only the big, national, and international corruption is left, then that may be dealt with through elections and bigger international forum.

Transparency becomes meaningful when the majority support it. Having all political leaders publicly display their tax reports and personal possessions will make it easier for the public to trust them and for them to work without being accused for something they have not done.

While corruption is rampant around the world and exists on every level and every corner of human society, those who have been able to control the corruption to some extents have done so by molding their social infrastructure in a way that discourages corruption.  They rely more on social deterrents than punishment, more on the carrot than the stick.

We cannot expect society to behave radically different from the officials elected by society, from among members of the society. Therefore, it is imperative to educate children, teens, and adults on the perils of corruption and the damage it causes in the society, emphasizing the suffering of the victim. At the same time, it is important to develop a strong, independent press willing to take on and expose corruption wherever it is found.

The author holds an MBA in Finance and Marketing from Interamerican University. He worked with Mitsubishi Motors Sales of Caribbean, Inc. (MMSC) in various positions for 24 years and became the firm’s General Manager of Operations. After leaving MMSC in 2019, he got certified as a Coach in Personal Finance.  He now helps individuals and business to manage their finances.

This article has been read 611 times
COMMENTS