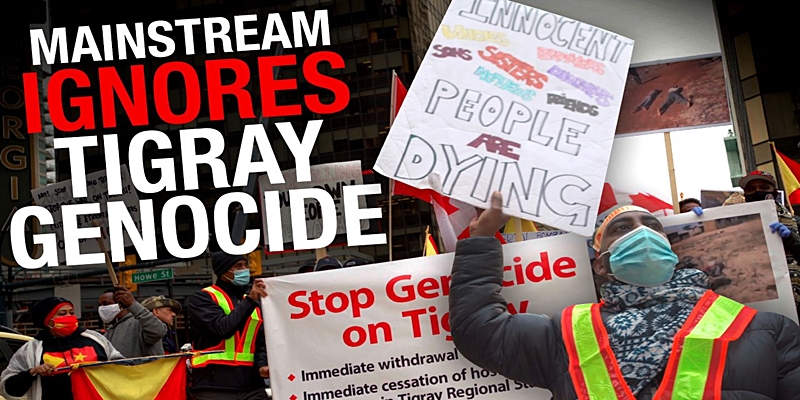 Subject: UNHRC Must Conduct an Independent, Transparent and International, Not a Sham Investigation of the Genocidal War on Tigray

1. We are concerned British citizens and residents of the UK of Ethiopian Tigrayan origin. We are organised under a broad democratic platform known as “Mekete Tigray UK” (i.e. Defence of Tigray). We are writing again to bring our Government’s attention to the War on Tigray. There are credible allegations as well as verified crime against humanity and war crimes being committed by the armies of the regimes of Abiy Ahmed of Ethiopia, Amhara Regional Government and Isaias Afewerki of Eritrea. The crimes also include ethnic cleansing of millions of Tigrayans in Western and Southern Tigray by Amhara Revanchists and their Militias as attested by the US State Department Dossiers and as reported by the New York Times on 26 February 2021.

The war has been raging for five months today with horrendous aftermaths and catastrophic consequences in terms of human lives, property, and livestock. The intensity and extent of the damage is such, it has damaged the sensitive landscape and biodiversity of the Region. To date, tens of thousands of people have been killed; hunger and starvation, and sexual violence and rape have been weaponised. According to the UK Parliamentary Debate on Tigray held on 23rd March 2021 over 10,000 Tigrayan girls and women have been sexually abused and raped. The Region’s infrastructure has been deliberately destroyed. These are with the intention to completely subjugate the people of Tigray and bring them to surrender their autonomous and self-governing rights enshrined in the Federal Constitution of Ethiopia:

“Every now and then, East Africa breaks into world consciousness. It happened in the mid-1980s, when Ethiopia underwent a terrible famine.Teams of pop stars made two hit “Charity Singles”: “We are the World” and “Do they Know it is Christmas?”. Today, Ethiopia is again in the news, for War in Tigray, a region in the country’s north. What is happening there is worse than war, if such a thing is possible. Tigray is a theatre for war crimes and crime against humanity. To make it more interesting – if that is the word – Ethiopia’s head of state is the 2019 Nobel Peace Laureate, Prime Minister of Ethiopia.” (Jay Nordlinger, National Review; 22 March 2021)

“A Pogrom is happening in Ethiopia. Ethiopia is killing its own citizens wantonly. That is chilling, but true: by attempting to extirpate Ethiopia of Tigrayan ethnicity and heritage, Ethiopia’s military and government stands accused of purposeful ethnic cleansing, a precursor to all-out genocide, as outlawed by the UN Convention against Genocide” (Professor Robert Rotberg, Former President of the World Peace Foundation; 28 January 2021)

2. We commend the UK Government’s position including the call to end the fighting in Tigray and the peaceful resolution of the conflict through political dialogue; the complete and verified withdrawal of Eritrean troops from Tigray; the unfettered humanitarian access to the victims of war who are on the verge of starvation and famine. We also welcome the Government’s call for an independent, transparent and international investigation of the alleged crimes committed in Tigray.

4. We are, however, extremely saddened to hear the United Nations Human Rights Council (UNHRC) Chief, Ms Michelle Bachelet, agreement with the Abiy Ahmed regime to conduct a joint investigation of the alleged crimes against humanity and war crimes being committed in Tigray. This is not only a major reversal of position by the UNHRC and the UN system, but also a total betrayal of the Tigrayan victims of the war. It is a travesty of justice of the highest order to involve a state sponsored institution, who quietly allowed the systematic persecution of Tigrayans all over Ethiopia. The Ethiopian Human Rights Commission (EHRC), has no moral or professional integrity to be a co- investigator. It is now well established the complicity of the EHRC in the Maikadra Massacre of Tigrayans by the Amhara Militia and Fano Paramilitary; the EHRC’s deliberate cover-up and disinformation regarding the victims and perpetrators is a testimony of its incompetence and also a deliberate silence to conceal the truth. Agreeing to the EHRC as a co-investigator amounts to allowing the culprits to investigate their own crimes.

5. We feel, the Tigrayan people have again been betrayed not only by the government that is committing the atrocities, but by the UNHRC’s agreement with the alleged perpetrators, and supporters and condoners of the crimes. This is ironic coming from Ms Michelle Bachelet who was a victim of the military Junta of Augusto Pinochet. Would she have allowed Augusto Pinochet’s crimes to have been investigated by an institution that he set up, controlled and directed? By an institution that was staffed with his functionaries and confidants? It appears that Abiy Ahmed not only managed to deceive the UN Secretary-General, Antonio Guterres, about the non-presence of Eritrean troops in Tigray but he also managed to mislead Michelle Bachelet when she accepted the EHRC as a co-investigator of the crimes committed in Tigray. This is not only a mockery of justice but also disrespect and disrepute to the organisation she represents. This is what Elie Wiesel called “double killing” when referring to Holocaust Deniers. In Tigray’s context, the crime committed against Tigrayans is to be investigated by the very institutions and functionaries that are complicit in the crime against humanity and war crimes, as well as ethnic cleansing, as evidenced by the US State Department dossier. Moreover, it gives a completely different and opposite meaning to the concept of independent and transparent investigation of war crimes.

6. The EHRC lacks political credibility, track record, institutional independence and human resource capacity to undertake an independent, transparent and impartial investigation of credible allegations of crimes against humanity and war crimes. In an academic 2019 paper entitled: “The Ethiopian Human Rights Commission:
Critical Analysis in its Roles of Promoting Human Rights”, Lamessa Gudeta analyzed the EHRC’s independence against the criteria of financial autonomy, the mechanism and processes of EHRC Commissioners appointments; the EHRC problems of accessibility; and the legal and operational autonomy of the institution, thereby concluding: “In conclusion, EHRC has little or no role in promoting and protection of human rights as it stands now. The Global Alliance of National Human Rights Institution has ranked the EHRC as failing the Paris Principle.”

7. In an in-depth review of the work of the EHRC during the period 2013-2020, Amnesty International findings catalogue structural and institutional weaknesses and biases that undermine the EHRC as an independent agency:

“The EHRC failed to ensure that human rights are protected, respected and enforced and to take necessary measures when they were violated. Instead, the EHRC whitewashed human rights violations through compromised methodologies, dismissing credible allegations and eschewing a clear stand on human rights violations”. (Skirting Human Rights Violations – Amnesty International Report on EHRC, 2019)

“Our analysis shows that the EHRC is not fit for purpose as the country tries to break with the repressive past. The EHRC’s brazen bias against victims and a dismissive stance towards their complaints means that the EHRC’s reports on protester killings and prison conditions squandered opportunities to make things right for the victims.” (Joan Nyanyuki, Amnesty International Director for East Africa, the Horn and the Great Lakes; June 2019)

8. The irony is that even the UNHRC community in Geneva, including the predecessor of Ms Bachelet, thinks that the EHRC is a partisan institution and lacks institutional independence and capacity to investigate credible allegations of crimes against humanity and war crimes:

“Ethiopian Human Rights Commission is not as yet what is called Paris Principle-compliant and not up to the status. Therefore, it is seen as not independent by the human rights community in Geneva.” (Zied Raad Al Hussien, UN High Commissioner for Human Rights, 2018)

9. The people of Tigray have been subjected for too long to a barbaric and genocidal war, where hunger, starvation, sexual violence and rape have been used by Abiy Ahmed, Isaias Afewerki and Amhara Expansionists. The aftermaths of the war have been horrendous, including atrocities and massacres resulting in the death of tens of thousands of civilians; millions dislocated and on the verge of famine; the rape of thousands of girls and women; the destruction of property and infrastructure; the wanton of destruction of religious, cultural and heritage sites.
There have been credible and verified evidence that crime against humanity, war crimes and ethnic cleansing have been committed in Tigray.

10. We plead to our Government, Western governments and global agencies to insist on an international, independent and transparent investigation of the credible allegation of crimes against humanity and war crimes in Tigray. We also plead further that our Government takes concrete actions to stop the War on Tigray.

11. Finally, we thank you for your time and attention, and trust that our Government will do whatever is required to ensure that justice is done and is seen to be done in respect of the crimes being committed in Tigray. We have appended testimonies on crimes being committed in Tigray. We trust and look forward to hearing your response; and we could be contacted at the above address for further information.

This article has been read 179 times
COMMENTS