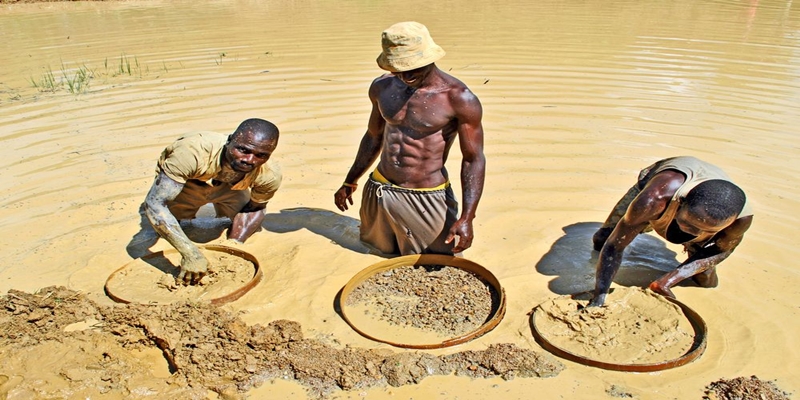 They are all I need to please me.

They can stimulate and tease me,

They won't leave in the night.

For what good will love do me?

Diamonds never lie to me,

For when love's gone,

- Shirley Bassey, from the soundtrack of the movie that starred Sean Connery as James Bond, “Diamonds are Forever”.

Diamonds and Sierra Leone are fused in global consciousness.  The political boundaries of Sierra Leone are shaped like a diamond that has gone through the best of diamond jewelers in New York. Sadly, in spite of Sierra Leone having been the source of the FOURTH BIGGEST DIAMOND IN THE WORLD – “The Star of Sierra Leone” – and some of the biggest diamonds used by some of the most powerful and wealthiest people on planet earth, the people of Sierra Leone have gained very little since the industrial mining of diamonds started in the 1930s.  Instead of diamonds being a blessing to Sierra Leone, they have been a typical example of an African  “resource curse” – not only because of the  irreparable and irreversible environmental damage as the diamonds are being mined; but more so, because diamonds have awakened the worst of greed and insensitive predation of the political and bureaucratic elite, which escalated during the eleven years civil war – 1991 to 2002 – when the ferocious  quest for diamonds by armed combatants, mercenaries, government soldiers, international troops…. was the rationale for the meting out on the hapless citizenry some of the most sordid brutality seen in modern history.

The diamonds that almost littered the rough and muddy roads of the diamond-rich Kono District in the Eastern Province of Sierra Leone from the 1930s to the 1970s and could be easily picked up by a five-year-old child are no more.  Diamonds in the district today are largely mined by large scale industrial companies like Koidu Holdings. They dig a mile deep into the granite rocks.  They shatter homes and lives for miles around them.  I suspect successive governments of Sierra Leone since Independence in 1961 have no technology, or, professionals with integrity, to monitor exactly how much diamonds are being mined and exported by these companies – they meekly take what these companies give out to them, with childish naiveté. I suspect that the Kimberley Certification process concocted after the civil war in Sierra Leone to prevent “blood diamonds” reaching the international market has been a charade to salve the consciences of the global diamond merchants in South Africa and the West – but, the SLAVE MENTALITY of governments in Sierra Leone have them accepting with slavish minds this global diamond status quo.  I have an idea to reverse this pathetic scenario for Sierra Leoneans/Africans.

We are going on a global quest for ALL the diamonds that have been mined from Sierra Leone (and Africa) and have been made into exquisite jewelry.  We are going to search for the STORIES of LOVE around these diamond jewelries; and rubbish Shirley Bassey’s song that diamonds are superior to love.   Have in mind, please, that the entire jewelry diamond trade has been an illusion created by two white men – the famous British colonialist, Cecil Rhodes, who founded Debeers about 1898; and Harry Oppenheimer, the American who bought part of Debeers about 1938, and together with a US advertising agency, N.Y. Ayer, set in motion the concept of a diamond as the ultimate symbol of romance for hard-working citizens. The story line sold to people was this: by putting an almost valueless rock called a diamond on the finger of their sweetheart, the breadwinner was not only displaying unparalleled affection, but also displaying enviable social status. And the bigger the diamond, the better! I aim to ride on the wave of this crafted illusion.

“The Star of Sierra Leone”

The 968.9-carat “Star of Sierra Leone” diamond was discovered by miners on February 14, 1972, in the Diminco (National Diamond Mining Company) alluvial mines in Koidu town, Kono District, in Eastern Province of Sierra Leone.   It ranks as the fourth-largest gem-quality diamond in the world. On October 3, 1972, Sierra Leone's then President, Siaka Stevens (APC Leader), announced that Harry Winston, the famous New York city jeweler, had purchased the Star of Sierra Leone for about $2.5 million. It was recut into a 42-carat pear shape by New York cutting firm, Lazare Kaplan. The rough diamond also produced 17 additional diamonds, of which 13 were deemed flawless. The largest single finished gem was a flawless pear-shaped diamond of 53.96 carats. Six of the diamonds cut from the original rough diamond were later set by Harry Winston into the "Star of Sierra Leone" brooch - it is likely worth more than $6 million. A rare characteristic of the stone is its perfect chemical purity: it is ranked as a “Type IIa Diamond”, a category which includes less than 1% of all diamonds.

Diamonds are not by themselves rare minerals.  Debeers monopolized the diamond industry globally which started by 1898 in South Afriica. He bought nearly all diamonds sold.  He prevented a glut in the market. He gave the impression that diamonds were extremely rare. Then, by 1938, US entrepreneur, Harry Oppenheimer, bought part of Debeers With a United States advertising agency, N.Y. Ayer, the greatest advertising marketing feat in human history was unfolded. In the US alone, diamond jewelry revenues were estimated at $24 billion in 2012; and by 2020, 54% of the US’ jewelry trade of $78 billion comprise of diamonds – almost $40 billion. The same goes for the global jewelry annual market of $229 billion, largely in the West, and China, Japan, the Arab Middle East, and India.

In Japan in 1967, only 5% of Japanese women used diamond rings for their engagement; by 1981, the number has jumped to 60% of Japanese women. Japan never had a tradition of romantic marriages, making diamonds a tough sell for brides. But by using slick advertising, playing up diamonds as a symbol of the modern West, or a way to break from traditional Japanese norm, De Beers was able to build a billion-dollar-a-year industry.  Now, one of the ‘stories of jewelry diamonds’.

Let us take a close look at the “Taylor-Burton Diamond”. The original rough diamond was found in 1966 in the Premier Mine in South Africa.  It weighed 241 carats.  It was to be auctioned in the US after being made by jewelers into a much-talked-about jewelry. The diamond was flown to Gstaad in Switzerland so that the most famous Hollywood actress of the time, Elizabeth Taylor, could see it. After she had seen it, it was flown back to the United States for the auction. Taylor's equally famous husband, the actor Richard Burton, had set a maximum bid of $1 million for the diamond. The sale proceeded in increments of $10,000 after $500,000, and only two people remained at the bid of $650,000. At $1 million, Yugler, who was bidding for Taylor and Burton, dropped out of the auction. Other famous names that put in a bid for the diamond included one of the most famous US jewelers, Harry Winston; another was the Sultan of Brunei (reputed to me one of the richest men in the world); another was the Greek shipping magnate, Aristotle Onassis (made more famous when he married Jacqueline Kennedy, the wife of the assassinated John Fitzgerald Kennedy, President of the United States; "Jackie", and she was famously known, was the most famous fashion icon of her era). Richard Burton had initially lost out on the diamond auction. His reaction?

Burton wrote in his diary: "I turned into a raving maniac …I was going to get that diamond if it cost me my life or 2 million dollars - whichever was the greater. “ In the 1970s, the celebrated love affair of Elizabeth Taylor and Richard Burton (who married Elizabeth Taylor; divorced Elizabeth Taylor; and married Elizabeth  Taylor for the second time) was daily in nearly all the US media, with the same intensity that the Western media devoted to Princess Diana, the deceased first wife of the heir to the British throne, Prince Charles. Richard Burton managed to buy the diamond for a million dollars, a record then, three times what was previously paid for a diamond jewelry. The diamond was subsequently named the "Taylor- Burton Diamond".

There are diamonds on the fingers of hundreds of millions of ladies in the richest countries of the world – each diamond carries a story we are going to track down among the famous and powerful, and link to the diamonds of Africa, AND Sierra Leone. To sheen our quest, there is the 1971 Hollywood film “Diamonds Are Forever", which starred the sexiest film star of his era, Sean Connery, from a novel by one of the greatest novelists of his time, Ian Flemming.  Then, there is the movie “Blood Diamonds”, set against the backdrop of the civil war of the 1990s in Sierra Leone. It’s the story of Danny Archer (played by Leonardo DiCaprio) – an ex-mercenary from Zimbabwe – and Solomon Vandy (played by Djimon Hounsou), a Mende fisherman of Sierra Leone, whose son had been kidnapped by the rebels, and made to murder and maim civilians. Archer’s main goal was to get from Vandy a rare pink diamond; Vandy’s obsession was to save his son from the nasty rebels. It was a stirring story of an African father’s LOVE triumphing over the GREED of the venal white man. See my story line…?

We are going to soften the ‘hearts’ and kindle the consciences of the millions of women who may have ‘blood’ on their hands (at best, a lot of dirt in their minds because of the millions of Africans who slave night and day to dig out diamonds only to live at starvation levels) in their purchase of diamonds from Sierra Leone/Africa.  They will ‘save themselves’ by contributing directly, or, indirectly, towards development of Sierra Leone/Africa. A form of “Diamond-Reparations’. Shirley Bassey’s lyrics are wrong.  It is love that gives gloss to diamonds; love’s luster that will last forever.

This article has been read 460 times
COMMENTS