Why Africa is a Priority for Russia's Rosatom 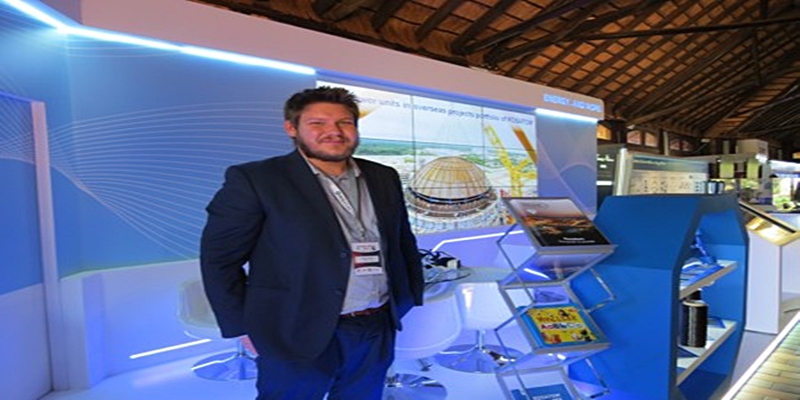 After the first Russia-Africa summit held in Sochi, authorities have been moving to build on Russia's relations with African countries. As set in the joint declaration, the two sides have outlined comprehensive goals and tasks for cooperation in significant areas including science and technology.

Business interest in Africa is steadily increasing and Russian companies, among them Rosatom, are ready to work with African partners. Energy (construction and repair of power generation facilities, peaceful nuclear energy and the use of renewable energy sources) is an important area of the economic cooperation between Russia and Africa.

Ryan Collyer is the Chief Executive Officer (CEO) of Rosatom Sub-Saharan Africa, and his key responsibilities include overseeing, implementing and managing all Russian nuclear projects in Sub-Sahara African region. In this insightful and wide-ranging interview with Kester Kenn Klomegah early April 2021, Ryan Collyer discusses efforts toward providing nuclear power, training of nuclear specialists, the main challenges and the future plans for Africa.

Here are the interview excerpts:

Even before the first Russia-Africa summit held in October 2019, several African countries had shown a keen interest in building nuclear power plants. What is the current situation in the bid to move from mere interest to realizing concrete results in Africa?

Nuclear power is not new to Africa. South Africa has successfully operated the Safari 1 research reactor for over 55 years and Koeberg nuclear power plant for over three decades. At one point, South Africa was the second-largest exporter of the life-saving medical isotope, Molybdenum 99, in the world. There are research reactors in the Democratic Republic of Congo, Nigeria, and Ghana.

Due to the cooperation with the International Atomic Energy Agency, many countries like Benin, Ethiopia, South Africa, Tanzania, Zambia are benefiting from modern nuclear technologies in healthcare and agriculture. In Zambia, a cancer disease hospital has seen over 20,000 patients diagnosed and treated at the hospital. Benin's soybean farmers could triple their income using the benefits of nuclear irradiation. Tanzania’s island of Zanzibar became tsetse-free thanks to the Sterile Insect Technique (SIT).

Estimate the potential nuclear energy requirements in Africa. How do they compare to other alternative power sources such as solar and hydro-power?

Today, 600 million people in sub-Saharan Africa (one-out-of-two people) do not have access to electricity. Any significant change is not forthcoming, according to the International Energy Agency (IEA). Estimations show that 530 million people (one-out-of-three people) will remain without electricity in 2030. As GDP growth and urbanization in Africa escalate, the power demand will increase exponentially. Today the electricity demand in Africa is 700 terawatt-hours (TWh), with North African economies and South Africa accounting for over 70% of the total.

According to the IEA estimate, by 2040, the electricity demand will more than double in the Stated Policies Scenario to over 1600 TWh. It may reach 2300 TWh in the Africa Case Scenario. It is undeniable that Africa needs vast amounts of sustainable energy to transform societies, grow economies, and reduce the global carbon footprint.

No single source of electricity can provide these amounts and considerably lower greenhouse emissions. A healthy mix of several intermittent and base load options can satisfy these criteria. The top-5 performers in the Energy Trilemma Index by World Energy Council have a combination of both nuclear and renewable resources to balance all three dimensions: equity, security, and environmental sustainability, thus enabling their prosperity and competitiveness. For example, Switzerland has over 30% nuclear, Sweden roughly 40% nuclear, Finland - 18%, and France - over 70% nuclear.

Apart from energy, nuclear can solve other continent problems, from low industrialization to advances in science, healthcare, and agriculture. So, we are advocating a diverse energy mix that utilizes all available resources, including renewables and nuclear, to ensure climate resilience and environmental safety, social equity, and supply security.

Discuss the planned nuclear projects in South Africa, Zambia and Egypt. Why have they not taken off as planned?

Our plans for projects in Egypt and Zambia are proceeding at the pace acceptable for both parties. In Egypt, we plan to commission four power units with VVER-1200 type reactors with a capacity of 1200 MW each by 2028. We will also supply nuclear fuel throughout the entire NPP life cycle (60 years), provide training services, and carry out maintenance and repairs within ten years after each unit's start. With our initial agreement signed in 2015, and necessary infrastructure still being put in place, the El Dabaa project is firmly underway.

Our project in Zambia, Center for Nuclear Science and Technology, is implemented in several stages, starting with a Multipurpose Irradiation Center. Once the Center is built, a training complex within it will build capacity in nuclear technology by providing opportunities for training students and carrying out advanced experiments and research that provides a new level of practical competencies. With Zambia being new to nuclear, the installation of infrastructure is the key priority at the moment.

In South Africa, we are monitoring their ambitions to add 2500MW of new nuclear to the grid very closely. We are not currently engaged in any active nuclear projects. The initial 9600MW nuclear new build program in South Africa was halted in 2017 as a result of internal procedural issues of the country. It is important to note that the 9600MW program did not make it past the Request for Information (RFI) stage, and Rosatom was only one of the many vendors interested to bid for the project.  The program was then downsized to 2500MW and restarted in 2020 as the country grapples with power shortages due to an aging coal-fired fleet.

To what extent is the use of nuclear power safe for Africa? What technical precautions (measures) can you suggest for ensuring nuclear security?

A nuclear power program requires meticulous planning, preparation, and investment in time, institutions, and human resources. The development of such a program does not happen overnight and can take several years to implement. All countries, which embark on the path towards the peaceful use of nuclear technologies, do so by adopting the IAEA Milestone Approach framework. This approach provides newcomer countries with well-structured guidance and a clear to-do list, which gives them a clear understanding of how to safely and effectively implement and manage their civil nuclear program. This approach includes necessary policy and legal framework, human capital development, installation of management and regulatory bodies, implementation of safeguards, and educating the public.

Since many of our partners are relatively new to the technology, we are able to provide full support to them on their path towards achieving their national nuclear energy programs in full accordance with IAEA regulations.

Do you also envisage transferring technology by training local specialists?

Our ultimate goal is to help our partners gain independence in terms of human capital. We train local personnel via a government-sponsored bursary programs by the Russian Ministry of Science and Higher Education. Since 2010, hundreds of students from Algeria, Ghana, Egypt, Zambia, Kenya, Nigeria, Tanzania, Uganda, Ethiopia, and South Africa have been receiving nuclear and related education at leading Russian educational institutions. Currently, over 1500 students from Sub-Saharan Africa study in Russia under bachelor, master and post-doc programs, 256 students are on nuclear and related programs.

Another aspect is short-term training for professionals - managers and specialists in nuclear. The topics of training range from nuclear energy, technology management and technical regulations to safety features of Russian designs in nuclear.

Currently, renewables show the fastest-growing curve in meeting this demand with the solar potential of 10 TW, the hydro of 350 GW, the wind of 110 GW, and the geothermal energy sources of 15 GW. Many are easy to install and demand little in terms of investment.

However, the critical question is reliability. The US Energy Department estimates show that nuclear power plants produce a maximum power over 93% of the time during the year. That's about 1.5 to 2 times more than natural gas and coal units and 2.5 to 3.5 times more reliable than wind and solar plants. To replace a nuclear power plant, one would need two coal or three to four renewable plants of the same size to generate the same amount of electricity onto the grid.

Another critical question is the cost. Most of the funds are needed to during the construction period. Building a large-scale nuclear reactor takes thousands of workers, massive amounts of steel and concrete, thousands of components, and several systems to provide electricity, cooling, ventilation, information, control and communication. However, apart from a reliable source of electricity throughout several decades (from 40 to 60 years minimum), the International Energy Agency (IEA) estimates that the construction of new NPPs is competitive compared to other green energy sources like wind and solar.

Our experience shows substantial dividends for any country that joins the international nuclear community. We are talking about thousands of new jobs, quantum leaps in R&D, and the creation of entirely new sectors of the economy. According to our estimates, US$1 invested in nuclear power plants under the Rosatom project brings in US$ 1.9 to local suppliers, US$4.3 for the country's GDP, and US$1.4 to the Treasury as tax revenues.

We have recently calculated even more specific data based on El Dabaa nuclear power station. During the construction period, the NPP project will increase the country's GDP by over US$4 billion or 1%, bring around US$570 million as tax revenue, and employ over 70% of local personnel. Apart from the NPP itself, Egypt will have a new seaport, several roads, and schools constructed. After the start of operations, over 19% of the population or 20 million people will have access to electricity, and the NPP will prevent over 14 million tons of CO2 emissions annually.

While the capital cost for nuclear energy may be higher, the reliable energy that it produces over its lifespan is very affordable. The inclusion of nuclear energy into the energy mix itself gives a powerful qualitative impetus for the economy, the establishment of high-technology-based industries and, as a result, the growth of export potential and quality of life.

Reference: Rosatom offers integrated clean energy solutions across the nuclear supply chain and beyond. With 70 years' experience, the company is the world leader in high-performance solutions for all kinds of nuclear power plants. It also works in the segments of wind generation, nuclear medicine, energy storage and others. Products and services of the nuclear industry enterprises are supplied to over 50 countries around the world.

This article has been read 428 times
COMMENTS