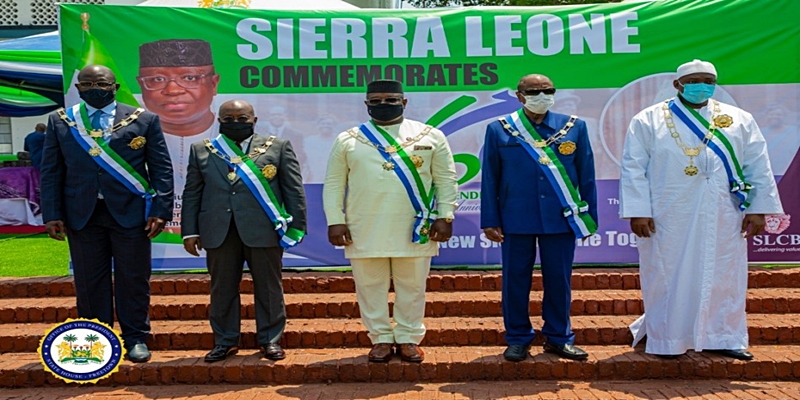 "Emancipate yourself from mental slavery... None but ourselves can free our minds" - Bob Marley, in Redemption Song.

The 60th Independence commemoration for Sierra Leone? Come on! All the educated and governing elite know that this is an Orwellian Big Lie. Sierra Leone has never been Independent. In the big issues of international trade; foreign relations; mineral exploration and exploitation; fisheries; international finance and debt; even food... we are more dependent on the West (and now China) than in the period from the 19th century to 1960 when young British men would scream insults at black civil servants, and lowly workers in European companies, that dominated all commerce in Sierra Leone.  Nearly all African countries are like us. Wallowing in the self-deceit of the Independence Era of the 1960s.

I am now going to proffer curatives to emancipate our slave minds in simple language - not to be guilty of what APC’s Hon. I.B. Kargbo in 2017 accused me of, writing "dense" articles - so the intellectually lazy Sierra Leonean educated elite, and ignorant educated youth... would easily understand me.

The very fact of commemorating or celebrating Independence Day for midget-like, or, economically-weak countries like Sierra Leone, Ghana, Gambia, Kenya, Niger... is the continued acceptance of our sub-human status, as Europeans had perceived Negroid Africans for centuries.  Who carved the political boundaries of Sierra Leone, Senegal, Cameroon, Togo, Zambia, Rhodesia...? Europeans - during the Conference of Berlin in 1884/1885. That was after over three hundred years of the Atlantic Slave Trade, the worst enslavement of man by man in human history.

The 1884/1885 "Partition of Africa" by the European powers was done so that they would easily take over Africa without fighting among themselves, to exploit our natural resources, like they had done to our bodies for over three hundred years.  The new nations of Africa were not created in the interest of Africans.  Why should we cling to these political boundaries created by the white man?

Escape from the slave mentality of these political boundaries will mean creating our own boundaries. I propose bigger political boundaries - like a West African State embracing all 16 states of West Africa as one political unit. Our economies and militaries are too weak. Our human resource base in science and technology too is pathetically low, for us to even think of, say, dividing Nigeria or Ivory Coast into three different countries.  When we are free in large states created by Africans, we can compete with China, the European Union, the United States of America, and Brazil.

Can someone help me with the comparative statistical data between, say, Sierra Leone and Liberia, as against China - in GDP and GNP; industrial and manufacturing output; science and technology productivity; intellectual output? It is chilling when one looks at the chasm between individual African countries and China.  Africans have accepted this widening gap between China and their tiny countries only because of this ignominious slave mentality.  Africans accept their secondary status today like they accepted their sub-human status to the white man in Europe and America.

There is a stronger slave chain in the African mind: the slave chain of Christianity and Islam.  But that is another article.  I have promised to be simple.

Listen to your authentic African philosophers to free your minds.

This article has been read 143 times
COMMENTS