Ruto’s Agenda for The Kenyan Diaspora Is Impressive 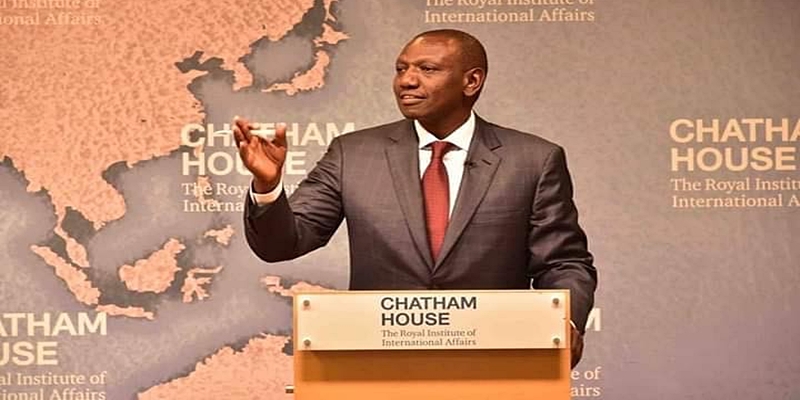 Deputy President William Ruto recently held the first virtual meeting with the Kenyan diaspora drawn from Europe, North America, Oceania, and the Middle East. He reassured those who attended that he is committed to addressing their cause and implored them to support his presidential bid next year.

The DP acknowledged the pivotal role played by the diaspora in boosting the country’s economy through remittances, philanthropy and other local development projects. He reminded them that he has a robust agenda to ensure that their aspirations and predicaments are addressed when he takes power in 2022.

It must be remembered that former Prime Minister Raila Odinga is perhaps the only national leader in post-independence Kenya who has benefited most from members of the Kenyan diaspora especially on campaign strategy and other logistics.

It's worthy to note that since Mr Odinga, switched gears to support President Kenyatta’s Jubilee government after the famous handshake, his support in the diaspora has waned tremendously.

Several factors have contributed to this. First, Odinga has never advanced any program to spur the welfare of the diaspora. When he served as Prime Minister, he completely forgot the external constituency whose backing he has enjoyed since he began vying for the presidency.

As the late Mwalimu Julius Nyerere once said; “never be complacent. Always examine yourself, can’t you do better, couldn’t you do better?” Although the founding father of Tanzania remarked this to freedom fighters in Southern Africa during the struggle against apartheid, it serves Mr Odinga well not to take those who have supported him consistently for granted but rather change his modus operandi.

Unless Odinga tries to mend the fences with the diaspora, Ruto's meteoric inroads into the diaspora will completely erode his support.

Most of the Kenyan diaspora detest the BBI, birthed after the handshake. The diaspora was perplexed after realizing that the late Senator Yusuf Haji’s task force ignored all the 16 recommendations they submitted to his team. Some diaspora leaders even reached out to Odinga and implored him to address their concerns, but all landed on deaf ears.

“Our voices must be heard; our challenges and aspirations must be captured in the corridors of governance irrespective of where we are domiciled. It will be outrageous for the diaspora to support an initiative that is not inclusive. We will viciously campaign against the BBI if it’s put in a referendum.” Said Mr Evans Momanyi from North Carolina.

The Deputy President is often associated with maladministration practices. Despite this, the Kenyan diaspora pointed out that all human beings have flaws. Ruto should be given a chance to prove himself at the helm.

Majority of the participants during the meeting reaffirmed to the DP that they are not supporting him because of his perfection but because he listens... his agenda under the “hustler movement” if actualized will lift many Kenyans from the abyss. Putting his weaknesses aside, the participants pointed out that Ruto has the intelligence, and human wherewithal to lead the country.

“If you want a perfect leader, you can’t find one. It is only Jesus who walked on this earth 2000 years ago who was 100% perfect. From Moses, King David, King Solomon, Nelson Mandela, Gandhi, Winston Churchill, and even ancient philosophers like Socrates; all had human limitations,” said Prof Charles Choti lives in Washington DC.

“I used to view the DP from a negative prism. After engaging him one-on-one, I am convinced that he means well for Kenya especially the downtrodden members of our society. His hustler nation philosophy is not a campaign gimmick but a reality blossoming from his heart; given his humble background,” said Lister Nyaringo.

A passionate supporter of the deputy president, Peter Nyandega currently in the US from Bogichora Ward in Nyamira opines that Ruto has demonstrated consistency in pushing the hustler agenda by entrenching the “bottom-up” economic model which focuses on lifting Kenyans from joblessness and economic marginalization.

The diaspora is optimistic about Ruto’s economic agenda especially after enlisting Kenya's great economist Dr David Ndii in his team.

“When my political mentor- Raila Odinga decided to be President Kenya’s golf caddie, I decided to support Ruto. The ODM leader neutered the opposition when his party failed to oversight the Jubilee government which is a travesty to democracy and multiparty politics in Kenya,” said Mary Chinta, a Kenyan working in Germany.

The most captivating promise by Ruto for the diaspora is the introduction of the Ministry of diaspora affairs if he wins the presidency next year.

The Ministry will be tasked with mitigating the challenges of Kenyan expatriates especially domestic workers in the Middle East. The Ministry will also safeguard the interests of the diaspora's domestic investments and address any other issues they may face in their domiciled countries.

“By bringing on board sharp minds like Prof. Kisiangani, Dr Ndii, and Barrack Muluka into his campaign team, it’s a clear demonstration that Ruto acknowledges the skills of Kenyans. He is therefore likely to recognize the diaspora who hold impeccable skills to build Kenya,” said Samuel Cheraisi, a resident of Atlanta.

The participants who engaged the deputy President in a question-and-answer session pointed out that relegating them to the periphery when they contribute massively to the country’s economy, is a travesty to democracy, inclusivity, and fair play. They pointed out that as frontline ambassadors, their ideas cannot be ignored.

They reminded Ruto that it's foolhardy for any Kenyan government to ignore them since they are the fourth-highest indirect contributor to the country's economy. This is according to the statistical indicators from the Central Bank of Kenya, where the Diaspora sent home through inter-bank transfers $209 million (Ksh20.94 billion) and $245 million (Ksh24.55 billion) in January 2018 and January 2019, respectively.

These words borrowed from a Caribbean Pastor, the late Myles Munroe, may inspire the deputy President who is facing political heat at home from political detractors: You will never be completely accepted until you are completely rejected. The qualification of acceptance is a prerequisite of rejection.

This article has been read 479 times
COMMENTS