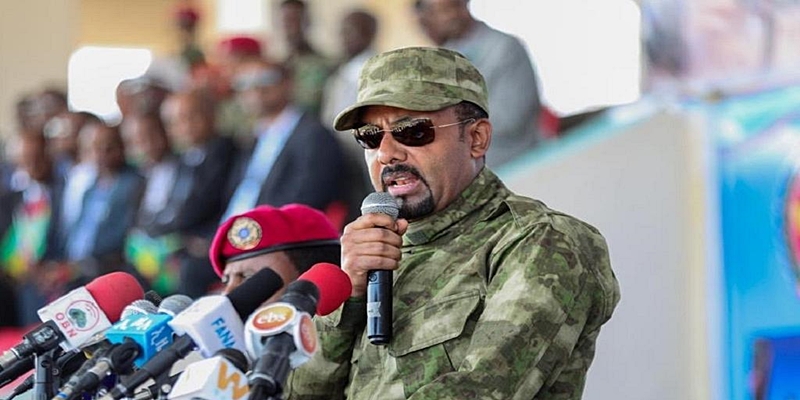 The word Genocide was coined by Raphael, Lemkin, a Jewish lawyer in 1944, in Poland in his book Axis Rule in Occupied Europe, describing the Nazi policies and their implementation.  The word is a combination of ancient Greek word genos meaning race or people with the Latin word cide, meaning to kill.

The term is described as an intentional action to destroy a people: “Killing members of the group; causing serious bodily or mental harm to members of the group; deliberately inflicting on the groups' condition of life calculated to bring about physical distraction in whole or in part.” This is what is exactly happening in Tigray.

Moreover, the United Nations Genocide convention which was established in 1948 defines Genocide as “acts committed with intent to destroy in whole or in part a national, ethnic, racial or religious group.”

Further, Article 7 of the United Nations states that “No one shall be subjected to torture, or cruel, inhuman or degrading treatment or punishment.” It includes deliberately inflicting on the group’s conditions of life calculated to bring about its physical destruction in whole or in part.  Destruction of cultural heritage is also regarded as a form of cultural genocide.  The deprivation of food, water and health care can also be seen as an act of genocide.

Additionally, destruction of natural resources like forests is regarded as a form of genocide.  Extensive destruction of and appropriation of property is a form of genocide. It is reported 70% of health facilities are looted, damaged or destroyed. Additionally, according to the World Peace foundation’s report, significant number of economic infrastructures that employed more than 28, 000 employees are looted, damaged or destroyed, denying income for at least 150,000 Tigray people, the average family size in Tigray being 5.

Additionally, according to Amnesty International, the use of rape during a time of war is not a by-product of conflicts but a pre-planned and deliberate military strategy. Additionally, UN reported, “men forced to rape family members. At least, “516 rape cases reported by 5 medical facilities in Makelle, Wukro, Adigrat, Shire and Axum.”

This is probably the tip of the iceberg.  It is also indicated “The duration of time the conditions are imposed as an element of the act is also a factor in the application of Genocide” Abiy declared 6 months of starving, fear, anxiety, killing, raping and humiliating the people of Tigray.

All those genocidal actions are committed in Tigray by Eritrean forces, Ethiopian Defense forces and Amhara militias, coached and supervised by the Eritrean Leader, Isaias and the Ethiopian Leader, Abiy.

How those stages are currently manifested in Tigray

CLASIFICATION: Abiy called the Tigray leadership “the Junta and its supporters” and continued propaganda campaign against the people of Tigray for three years.

SYMBOLIZATION: consistent statements like “Tigrewoch, they looted our wealth, we have been in darkness for 27 years”; and spreading hate and suspicion, against the Tigray people.

DISCRIMINATION: Abiy is practicing discriminatory and exclusionary ideologies that would reduce Tegaru’s political standing in the country.  He removed all Tegaru who were in power, put many of them in jail, and some where thereabout is unknow.

DEHUMANIZATION: Daily hate speech and propaganda is spread. Tigrewoch, meaning people from Tigray, we have been in the dark for 27 years, they have looted our wealth, kimaloch, (head lice) etc.

ORGANIZATION: Genocide in Tigray is organized at the Ethiopian and Eritrean states level. The leadership of Ethiopia marshaled to organize and mobilize foreign countries to unitedly attack, kill, rape, dehumanize and exterminate the people of Tigray.

POLARIZATION: The government and Extremist hate groups like ESAT, the government’s mouthpiece broadcasted propaganda campaigns consistently against the people of Tigray;

PREPARATION: The Ethiopian and Eritrean leaders who seem to be victims of identity crisis planned, spend money, time, carefully assessed and reassessed the strength of Tigray to organize the Genocide act.

PERSECUTION: The Tigray people throughout Ethiopia are identified and thrown to jails. In the Associated Press report, “Ethnic Profiling: Ethiopia detains thousands of Tigrayan without Charge”, the report cited Brig. General Tesfay Ayalew as saying in an internal memo “We had to clean out of our inside.”

The Tigray people are denied basic needs like water, food, medical care and employment. Olivero, Beni, Director of Doctors without Borders said, “Health facilities and health staff need to be protected during a conflict, in accordance with the International humanitarian law, this clearly not happening in Tigray.”

Additionally, MSF on 5/5/21 said “The situation warrants immediate action” USAID sounded off the same alarm. Additionally, as recent as 6/8/21, Associated Press reported “The Ethiopian military blocked the road north of Agula to food aid convoys to the UN WFP, including Doctors without Borders and World Vision.”

Further one of the Interim Government officials via his twitter said, “One of the problems we are facing is there is a campaign that farming should be prohibited.”  He also indicated that seeds are prevented from entering Tigray. He said, “Efforts to prevent the entry of seeds and efforts to stop farming have no other message than perhaps let the people of Tigray perish from starvation” USAID added, “access is a matter of life and death”. 5/12/21 CNN report show essential aide was blocked by Eritrean troops, “by many accounts bears the hallmarks of genocide---” This is confirmed by the UN. We know the people of Tigray live on farming.

EXTERMINATION: This stage is manifested in many places in Tigray. The mass killing at Mariam Dangol church in Kilte Awlaelo, Axum, Humera, Giget,  DebreAbay and Mai kadra; the destruction of Debre Damo, 6th Century Monastery and Negash Mosque, the oldest Mosque in Africa are examples.

DENIAL: An example of this stage is digging mass graves and hide crimes. This also happened in many places in Tigray. As shown in Youtube videos, Amhara special Forces killed and threw bodies of young people over the clifftop in Mahibere Degue and Axum, where high resolution satellite images on December 13, 2020 showed disturbed earth of two graves, as per Amnesty International, to hide the commission of the crime.

Now, how about the intent?  Did Abiy has the intent to commit Genocide in Tigray? It is a big Yes. Why does not he stop the daily slaughter of innocent men, women and children of Tigray when the international community continuously demands to stop the war? If Alfred Nobel, who instituted the Nobel Prizes was alive today there is no doubt that he would scratch his head witnessing a peace prize winner sponsoring and committing Genocide.

Abiy with Isaias spent three years to plan their act of Genocide. They spent time, energy, money assessment/reassessment to deploy 42 Eritean divisions (6-25,000 soldiers); 12 division (6-25,000 soldiers) of Ethiopian Defense Forces; more than 10,000 Amhara special Forces and 3,000 Somalis and other forces totaling more than a million to overwhelm the Tigaru and exterminate them.

It is unfortunate that the International Community has not helped to stop the war in Tigray so far, despite the fact that the Responsibility to Protect (R2P) Doctrine states “if a state is unable to protect its own population from “genocide, war crimes, ethnic cleansing and crimes against humanity” then the international community must do something.”

I think there is still time to do something- stop the slaughter.

Genocide under the cover of war

-The ten stages of Genocide

This article has been read 429 times
COMMENTS