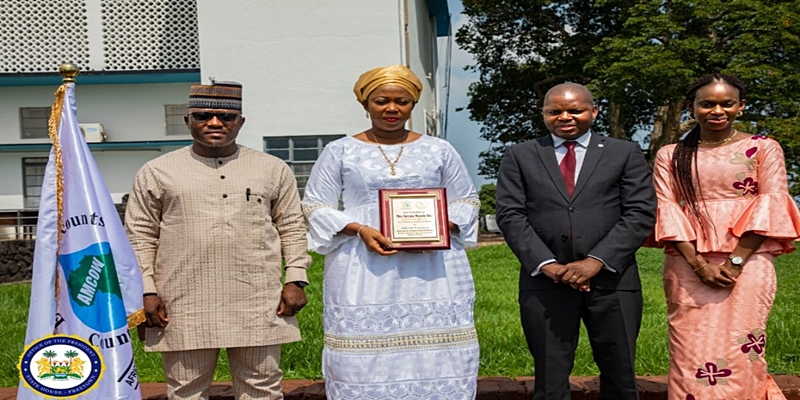 An unprecedented wave of hope has of late characterized the corridors of both diplomacy and people centered approach to human existence. One of Africa’s newest entrant on the global polity stage continues to make the African continent proud with enviable regional and international achievements.

Sierra Leone’s First Lady, Her Excellency Madam Fatima Maada Bio, has demonstrated considerable competencies and has been recognized for her tireless efforts in ensuring that women and girls have access to a clean and safe environment. Her landmark ‘Hand’s Off Our Girls’ campaign and programmes, which commenced a nationwide distribution of free sanitary pads to school-going children is remrkable. On May 27th 2021, the African Union through its States Minister’s Council on Water (AUCOW) awarded and decorated her as the New African Champion for Sanitation & Hygiene for AUCOW 2021. First Lady Fatima Bio  is the third prominent person to be honoured after Rwanda’s President Paul Kagame and former President of Liberia, Ellen Johnson Sirleaf.

AUCOW, a specialized committee for water and sanitation of the African Union formed in 2002 is a body comprising of all 52 states in Africa whose primary motive revolves around socio-economic, development, security and poverty alleviation among its members through a more transparent and result-oriented management of its water resources and its attendant supplies. Core among its mandate is to “ encourage mechanisms that promote best practices in water policy reforms, integrated water resources management, food security, water supply and sanitation, and also assist in delivery of national, sub-regional and regional programmes.”
Africa has one of the world’s highest rate of unhygienic toilets. While the African population is fast growing, its sanitation potentials are not consistent with the growth. The ratio on the number of people using improper sanitation is on the high side with an approximation of about 125 million people.

The “Thomas Theorem” in international Relations has this assumption that ‘if men define situations as real, they are real in their consequences.” This is the most plausible description that aptly describes who and/or what Fatima Bio stands for. Structural Regime theorists posit that the growth of multinational organizations are often as a result of the caliber of emerging actors whose mere presence gives hope to belligerent followers. Her Excellency, First Lady Fatima Bio of Sierra Leone succinctly fits these descriptions. Before she became the First Lady of Sierra Leone, Fatima Bio had dominated Africa’s international scene by receiving several decorations and titles as a champion of Africa. She even attained the Miss Africa 2000, the best movie actor.

Sierra Leone remains exceedingly proud of her extensive work throughout the country with the “Hands Off Our Girls” campaign. As a result of her fervent advocacy for gender empowerment and for the protection of women against sexual and gender-based violence, more girls are now safer in their communities and schools; more girls persist in school and are not forced into early marriages; more girls have access to menstrual hygiene products; and there is greater recognition of the immense potential of girls in fostering sustainable and inclusive development in Sierra Leone. Equality, equity, access, and empowerment are suddenly not incidental to how girls see themselves and believe in themselves in Sierra Leone.

In 2018 when she unquestionably became the First Lady of Sierra Leone, the narratives and aura around the Presidency and work as First Lady has seen unprecedented changes. In December 2018, history was made, when First Ladies from across Africa joined First Lady Fatima Bio in a peaceful protest March against Gender Based Violence on the streets of Freetown, Sierra Leone. It was a clear simple message “Hands Off Our Girls.” This was the single most powerful Women’s Empowerment Campaign ever launched and has gained traction and continues to be endorsed across the continent with support from African First Ladies.

Internationally and in 2019, First Lady Bio took the campaign to Canada, during the “Women Deliver Conference, The BBC London and The Commission on the Status of Women at the United Nations. Madam Fatima Bio led Africa’s First Ladies in a campaign to ban early child marriage and sexual violence against women and girls before at the 2019 74th United Nations General Assembly (UNGA) for support to the “Hands Off Our Girls” campaign.

After a very successful campaign on Women’s Empowerment, First Lady Fatima in 2019 launched a Hygiene and Sanitation Campaign for School Girls on Free Sanitary Pads as a compliment to the Government’s Free Quality Education initiative. The free Sanitary Pad distribution currently targets about 60,000 beneficiaries nation-wide. First Lady Bio maintained that “Menstruation is not a choice, you need not to be ashamed because it is not a crime” and urged them on them to focus on their education and say no to early marriage and teenage pregnancy.

This is Mrs. Fatima Maada Bio, First Lady of the Republic of Sierra Leone, the new Champion of Africa on for Sanitation & Hygiene for AUCOW 2021.

This article has been read 1,688 times
COMMENTS