Sierra Leone: China and Black Johnson Could be Black Slavery 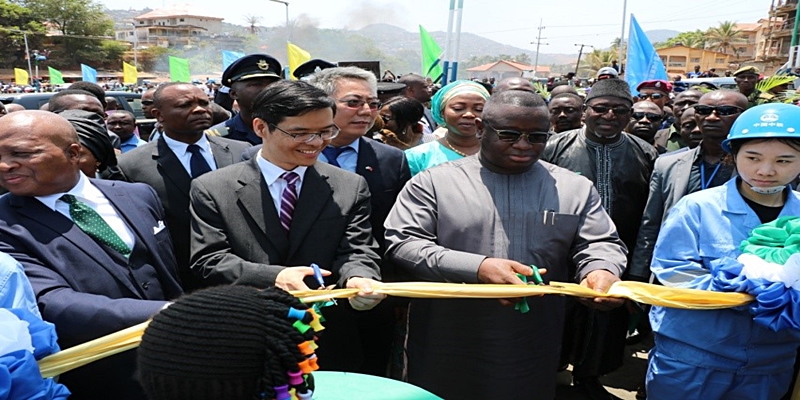 In a video posted on social media, passionate African-American, Dr. Umar Johnson, in a serial called “CANDID AFRICA-Truthful and Unapologetic” thunders, “Ethiopia, the only African country not to be colonized - up until now.  Ethiopia is one of the largest recipients of Chinese aid in the world… Why is the Chinese taking over Africa?

…Reason Number One: China is over-populated… They have over (1.6 billion) in one country.  China is looking for unexploited land where they can send their excess poor people. Africa is perfect…

Reason Number Two: Look at all the poor Africans!! Can you imagine a better place to go and open your businesses and factories where you pay people even less than you can pay in China?  ….

Reason Number Three:…To take over...(Africa’s) resources… The money they are giving Africa are not grants. They are loans…  Why is China giving poor countries like Kenya more money than they are able to pay back? They don’t want you to pay back.  There is always a clause that says ‘if you default on this loan, all your tea plantations and copper mines, all your oil reserves are mine’.

…Reason Number Four: To make the Africans dependent on them – culturally… intellectually …China plans to colonize Africa the same way the white man did...”

Dr. Umar Johnson mentioned Ethiopia as a classic example of China’s attempt at colonization of Africa.  What are the objective facts there?  "According to recent figures from the Ethiopian Investment Commission (EIC), Ethiopia has secured 500 million U.S. dollars from foreign direct investment in the past three months… Chinese companies have executed about 1,564 investment projects …from 1998 to March 2020 …” (SOURCE: Chinese companies powering Ethiopia's investment efforts amid COVID-19 - Xinhua/ English.news.cn [xinhuanet.com]; October 10, 2020).

“Chinese architects, machines, products, and even workers have swarmed the city. Even traditional items originating from Ethiopia such as the 'jebena', a coffee making apparatus, are being imported from China for cheaper prices.…”. (SOURCE: Chinese Investment in Ethiopia thescriptnews.com).

This piece is not about Ethiopia.

The peek into Ethiopia is to begin to ascertain whether Dr. Umar Johnson was exaggerating in his video.  He is a United States citizen.  Was he consciously or subconsciously raising the US flag, and positing China as a bogeyman? After all, former US President Donald Trump would rail against the Chinese’ unfair trading and finance practices.  The current US President is developing a coherent strategy to counter the Chinese Challenge – China, the second largest economy in the world that economists predict will overtake the United States to become the largest economy in the world in just about twenty years.

Let’s go back to “Black Johnson,” one of the villages on the Freetown Peninsular in Freetown, Sierra Leone – with sparkling beaches, one of the most idyllic spots on planet earth.

The Ministry of Fisheries and Marine Resources of Sierra Leone announced the government’s intention to establish a fishing port at Black Johnson.  With a $56 million grant from China!  That triggered a storm.  Environmentalists say the area is a breeding ground for rare species like pangolins.  Tourism developers claim that the beach would be despoiled by a fishing port.  Sierra Leoneans who own property in the area have denounced the highhanded stance of the government that wants to take their private property and convert it into public property without proper negotiations. The government on its part says it has appropriated Le17 billion as compensation for the 250 acres they aim to use for the fishing port.  It is grossly inadequate given the going rate of such a beautiful beachfront property.

Burnt by the negative press reports, the Chinese Embassy in Sierra Leone was forced to issue a Press Release: “The Chinese Ambassador in Sierra Leone Hu Zhangliang has appealed to the media to be fair and neutral in their reporting on the fish harbor and the Black Johnson site….(He complained that the )…Chinese have been at the center of the report …accusing them of wanting to destroy the country…(And he appealed to Sierra Leoneans)…to put aside geopolitics and Western sentiments….'China has never asked the government for a piece of land to build a fish meal of a fish harbor at anytime. We have enough fish harbors in China, and we cannot come to Sierra Leone to build such for ourselves'...”, according to The Calabash newspaper. Do not gloss over the Chinese Ambassador’s words on “geopolitics” and “Western sentiments.”

“(Foreign trawlers) – which are largely Chinese fishing vessels - are …. rejecting rules and regulations (of poor African countries). Just south of Oxford, England, advanced technology is being used to monitor the globe’s oceans. Oceanmind analysts are able to track trawlers all over the world via satellite transmission. Our featured BBC video explains how Sierra Leone waters specifically are being unfairly targeted by monster trawlers. Although these trawlers arrive from all corners of the globe, (about 75%) of them originated in China. Which begs the question – are Chinese trawlers decimating West Africa’s fish stocks…?” (SOURCE: Overfishing In West Africa | Sea Life Rescue).

The typical way Chinese fishing trawlers do fishing in West Africa’s territorial ocean space is called “Pair Trawling.” That is, two fish trawlers fish side-by side with a gigantic net set between them. In this way, the boats cooperate in scraping the sea bare – catching small and big fish; catching lobsters and crabs, etc.. It is illegal in Sierra Leone but the country lacks the capacity to stop the Chinese boats.  Sierra Leone has just two patrol boats- donated by the United States government - to patrol its seas.  It is not uncommon for Sierra Leoneans to collude with the Chinese trawlers to tip them when and where the patrol boats would be. The trawlers would evade the patrol boats.

Sierra Leone’s fish stocks are plummeting to dangerous numbers. Almost every single Sierra Leonean (and coastal West African) fisherman I have heard speak – directly; or, through videos easily accessible on YouTube - have been complaining bitterly over the Chinese trawlers plundering their territorial waters.  In 2019, I went to the President’s home district of Bonthe, and the complaints were resounding.   Even though fish from their waters stock markets all over the world, Sierra Leone sees less than 10% of the money from those sales. Sierra Leone could be losing hundreds of millions of dollars yearly from this Chinese fish theft.  And denying its peoples of the best source of protein intake.

West Africa/Sierra Leone is not the only ‘victim’ of the Chinese fish quest: “…..An analysis of transponder and global vessel registration data indicates Chinese boats involved in distant-water operations - meaning outside a country's own territorial waters - total as many as 17,000, according to London-based researcher Overseas Development Institute (Other analysts say that there are between 200,000 to 800,000 Chinese fishing trawlers; that, compared to the European Union’s 100,000 fishing trawlers)….From 2010 to 2019, Chinese-flagged or owned vessels accounted for 21% of global fishing offenses logged by Spyglass, a Vancouver-based fishing crime database…A 2019 global ranking by Geneva-based Global Initiative, a transnational crime watchdog, placed China first in the prevalence of illegal fishing by nations. South American nations are also crying against the Chinese fishing trawlers!

In May, 2021, the “Sierra Leone Industrial Fishing Company Association (SLIFCA)” published a Release which states that “The Fishing Industry in Sierra Leone has waited for a fish harbor complex for over 40 years, since 1970, with many promises from the major international development partners.”

The Release states that “the construction of a fish harbor remains the impediment for unlocking the wealth from the fisheries sector of Sierra Leone.” They were unequivocal in their support for the Black Johnson fishing port: “We would like to inform the public of Sierra Leone and overseas that our membership is in total support of this proposed project.” The Release was signed by some of its executives, which included “Bassem Mohamed” as “President, SLIFCA, & Managing Director of Sierra Fishing Company.”

I have made a social media posting asking details on the individual companies that form SLIFCA, and the shareholders in each of these companies to know whether Sierra Leoneans of NEGROID AFRICAN DESCENT own any significant shares in these companies. I suspect that “Sierra Leone” tagged to that association is just a front for foreign-owned boats.

I take a fervently ideological position in this Black Johnson situation. I am the Founder and CEO of the SLAVE SHIP-FREEDOM SHIP Movement.  It was founded in Nigeria in 1992.  It fuses the thought of the Atlantic Slave Trade with the thought that has engendered and nurtured Climate Change.  It tinctures green the centuries demand for Reparations for the Protracted Holocaust of the Atlantic Slave Trade.  The harsh reality is that while ideologues like us are making demands on the West for about the worst Crimes Against Humanity that the Atlantic Slave Trade was, China could be in the slow process of another enslavement or colonization of Africa – with a different tactic this time. Europe’s and America’s enslavement and colonization of Africa was brutal, and crude.  The Chinese are doing the same thing in a subtle way, using loans and investments.

Africa’s leadership that generally forget the past, and lack vision for the future, are only too willing to ‘sell Africans into slavery again’, like their ancestors did during the era of the Atlantic Slave Trade. Sierra Leone’s government cannot credibly claim the need for a fishing port when Chinese fishing trawlers have stolen (are stealing) most of the fish in our territorial waters – with European nations with satellite technology having the capacity to watch what is going on.

Like during the era of the Atlantic Slave Trade, Sierra Leone is in the vortex of what the Chinese Ambassador called “geopolitics.” Sierra Leone lacks the capacity to play this Fish War Game alone – China’s military budget at $178 billion is second only to the United States’ $740 billion (Nigeria, the West African superpower has a military budget of just two billion dollars). Africa is challenged to forge meaningful unity over this FISH WAR issue.

As Dr. Umar Johnson has warned, with millions of Chinese settling in Africa as businessmen who can mutate into being soldiers, Africa may have to face the Chinese naval strength of about 800 vessels (the largest in the world!), and military aircrafts of 3,260, the third largest in the world; not to talk of Chinese prowess in information technology and artificial intelligence technology that rivals that of the United States and Europe.

This article has been read 1,218 times
COMMENTS