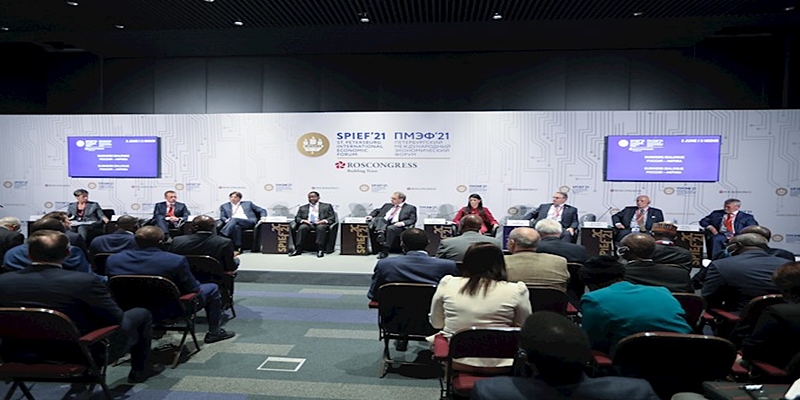 While the theme reflects the ultimate desire and initiative to review post-pandemic steps in connecting Russia with global businesses, outline strategies for stepping up sustainable economic development, it further offered the chance for putting back or revive inter-personal interaction.

Russian President Vladimir Putin explicitly emphasized that point, addressing the plenary session on June 4, "We are pleased that it is Russia that is hosting the first global business event after a long forced break, where members of the global business community can communicate with each other not only using advanced telecommunication technologies but in-person as well."

In his address to forum participants, who came mostly from Europe, Asia and Africa, Putin cited some economic achievements and tasks facing Russia. He also spoke about the importance of national projects as drivers of economic growth, vaccines, foreign tourism, and Russia's readiness to forge economic, scientific, and technical cooperation with its foreign partners. Putin was joined via videolink by Austrian Chancellor Sebastian Kurz and Sheikh Tamim bin Hamad Al-Thani, the Emir of Qatar, to address the gathering. About 2,000 foreign participating groups came to St. Petersburg.

Qatar mounted the biggest cultural and arts stand. In the Doha Hall, heads of ministries, departments, key companies of the country and representatives of public organizations discussed the strengthening of economic and political relations between states, business and cultural ties, cooperation in the field of ecology and nature protection, sports and innovation, health care and information technology.

There were business dialogues between Russia and a number of foreign countries. The Russia-Africa Business Dialogue session, moderated by Professor Irina Abramova, Director of the Institute of African Studies under the Russian Academy of Sciences, featured Mikhail Bogdanov, Deputy Minister of Foreign Affairs of the Russian Federation; Special Presidential Representative for the Middle East and Africa. The Guest Speaker - Eduard Ngirente, Prime Minister of the Republic of Rwanda; Rania Almashat, Minister of International Cooperation of Egypt; Alexander Saltanov, Chairman of the Association for Economic Cooperation with African States (AECAS); and heads of major Russian and African companies - Transmashholding, Uralchem, Russian Railways, the UN Least Developed Countries Technology Bank, Afreximbank and others took part in the discussion.

The Russia-Africa Business Dialogue session was part of the brain storming session in preparation for the forthcoming second Russia-Africa summit planned for 2022 in Addis Ababa, Ethiopia. Speakers at the session attempted to provide answers to a few questions: What agenda will Russia and Africa follow at the 2022 summit? What business strategy will serve both Russian and African interests? What Russian investment projects had already been implemented on the African continent? Are there new mechanisms and instruments for the Russia-Africa partnership being developed?

"Africa is first and foremost about people. What kind of water they will drink, what they will eat, how they will develop, what kind of education they will have. Our knowledge is our capital and our competitive advantage," Professor Irina Abramova, Director of Institute for African Studies under the Russian Academy of Sciences, remarked while moderating the session. Abramova notes that cooperation between Russia and Africa must be of a targeted nature. There needs to be a gradual transition to individual concrete work with the specific countries. This will serve as proof of Russia's deep and systematic approach to its policy for enhancing relations with Africa.

She proposes that in addition to the framework for Russian policy in Africa and Russia's renewed strategy for foreign economic activity, the Russian Federation ought to develop an implementable trade and investment strategy for Africa, move forward in practical terms in identifying partner countries and in setting concrete objectives.

The Rwandan Prime Minister, Edouard Ngirente, called upon Russians to consider increasing investment in Africa since Africa has great opportunities that investors from Russia can take advantage of.  Among these, are the continent's young population and workforce, the fast rate at which urbanization is taking place, and the huge potential that has been demonstrated in technological progress in areas like telecommunications and digitization of the society.

"Advancing our common prosperity agenda would imply translating the existing business opportunities into reality. This calls for important flows of investments in priority areas," he said, pointing at the African Continental Free Trade Area (AfCFTA) and regional integrations of economic communities as other priorities to advance  Africa's growth agenda and position the continent as an investment destination.

"This could be an opportunity for Russian businesses to invest in infrastructures such as roads, railways, ports, hydropower plants, and internet connectivity that facilitate trade on the continent of 1.3 billion consumers. The investment required is estimated at US$130 billion to US$170 billion per year," he said.

He also highlighted the need for Africa to build its own capacity, working together with partners including Russia, to undertake scientific research to manufacture vaccines for various diseases, including Covid-19.

Mikhail Bogdanov, Deputy Minister of Foreign Affairs of the Russian Federation and Special Presidential Representative for the Middle East and Africa, noted that Russian-African cooperation is gaining new momentum ahead of the second Russia-Africa summit in 2022, and recalled the need to create mechanisms to support Russian business in Africa, citing Russian President Vladimir Putin's message to African leaders on the occasion of Africa Day on 25 May.

"Today, we have reached a point where there is a need to intensify our cooperation by creating new fundamental mechanisms to support Russian business in Africa through so-called economic diplomacy, which consists of close cooperation between the Russian Foreign Ministry and line ministries and organizations," he said.

Alexander Saltanov, Chairman of the Association of Economic Cooperation with African States (AECAS) remarked that the need for state support for Russian companies is crucial for making a real breakthrough on the African continent, - and in this sense, it is useful idea creating Direct Investment Fund. Saltanov further spoke of the need to create representative offices, logistics, and service centers of Russian business in form of public-private partnerships in several countries or regions of Africa to organize systematic sales of Russian products on the continent.

"We can also use the experience of the Soviet Union to work in Africa - for example, creating a foreign trade company that would coordinate efforts in a particular country or in a particular region of Africa to assemble the products offered by Russian business in the market. One company will probably not be able to cope with this, but when there is some structure working in this direction, it will speed up the process," he stressed.

Saltanov said that an essential topic on the Russian-African cooperation agenda relates promotion of information. Information exchange in terms of business is also necessary - an agreement was signed during the SPIEF'21 to create a Russia-Africa Common Information Space. A full-scale presentation of this project scheduled in October.

Rapidly growing Africa is a promising market for Russian companies. "We, as Russian Railways, see Africa as our promising market due to the fact that Africa is developing dynamically. Today, this continent and its countries are emerging as leaders, including in terms of social and economic indicators. We expect Egypt to be the starting point from which we will begin interacting with other countries. We also see some opportunities in Tanzania. And of course, Ghana, Botswana, Morocco are of great interest to our holding company," stressed Sergey Pavlov, First Deputy Managing Director, Russian Railways.

"Egypt is an African country that is also developing investment programmes. We have important projects with the Russian Federation – the nuclear power plant in El Dabaa, which is a huge investment of US$13 billion. Egypt is a gateway to other African countries. We have done a lot in terms of developing transport partnerships between our neighbours, with our African neighbours. We are developing road projects, we are developing construction projects, we are also developing private companies," according to Rania Almashat, Minister of International Cooperation of the Arab Republic of Egypt.

Africa's growing and emerging market needs modern technology. "Another interesting area we want to develop in Africa is the digitalization of agriculture, various digital platforms that we are already successfully applying in Russia. Digital itself is useless unless it comes with infrastructure and with applicable things. Thus, digital is simply an accelerator for us," Dmitry Konyaev, Chairman of the Board of Directors, UralChem.

Konyaev suggested that, given the crucial importance of direct contacts between African heads of state and the Russian leadership, it should be necessary to intensify the work of all bilateral inter-governmental commissions.

"Of course, Africa is no exception in terms of all the global trends that we are seeing. Mainly, it is a growing population, urbanization, and development of new technologies. It is the development of transport accessibility for both passengers and freight. It is the construction of port infrastructure. In all of these aspects, Russia certainly has all the necessary technologies and competences to finally go back to these trade, economic and mainly social relations," Kirill Lipa, General Director, Transmashholding.

Economic diplomacy, strengthening of intergovernmental commissions and increased number of mutual visits. "After the Sochi summit, all efforts were focused on launching export to Africa. It is not easy, because 30 years after we left the region, we need to enter a competitive environment. This competitive environment has already been integrated into African life, into African legislation, and the conditions that are opening up for Russian business today – they are not quite the same as those for businessmen from France, the European Union, India, or China," according to Igor Morozov, Member of the Committee for Economy Policy of the Federation Council of the Russian Federation.

As head of the Coordination Committee on Economic Cooperation with Africa (AfroCom) established in 2009, Senator Igor Morozov hopes that the e-rouble will help or encourage Russian banks to enter the African continent after all and do their best to participate in financing Russian-African start-ups, Russian-African trade and, of course, in localizing Russian-African production.

Speakers at the session believe that mutual-advancement by both African governments and businesses could driver further cooperation between Russia and Africa. "Investing in the private sector can unlock the full potential of our continent and implement our plans. We are keen to increase our cooperation with Russia for the benefit of the whole continent," in the objective opinion of Rania Almashat, Minister of International Cooperation of the Arab Republic of Egypt.

"Today, the concession model primarily provides for initial and significant input by the investor. In this situation, I think in order to help Africa develop dynamically and rapidly, these concession models need to be revised, more attention needs to be paid, including to security and guarantees from the government, from the state, so that the investor feels protected," added Sergey Pavlov, First Deputy Managing Director, Russian Railways.

Over these several years, Russians have been discussing and referring to priority economic areas of cooperation in Africa. Some experts have also been stressing the importance of getting down to implement specific programmes and projects. Have repeatedly spoken about the systemic efforts, with well-developed guidelines, to boost the investment into the continent.

After the first Russia-Africa summit held 2019, expectations are skyline high as it offers the impetus, in the next few years, to substantially increase investment in the economy, industry, transport, telecommunications and tourist infrastructures, as well as in high technology, healthcare, urban development, and other fields that are vital to the quality of life. Africa, with its 1.3 billion population and resources, offers great opportunities for both state, corporate and private initiatives in investment spheres.

Due to the coronavirus pandemic, the forum this year took a combination of off-line and online format, with all epidemiological precautions observed. The Saint Petersburg International Economic Forum (SPIEF), often dubbed the Russian Davos, is the country's main showcase for investors, attracting political and business leaders from around the world. The SPIEF is held annually, and since 2006 it has been held under the patronage and with the participation of the President of the Russian Federation.

The author writes frequently about, Russia, Africa and the BRICS.

This article has been read 572 times
COMMENTS