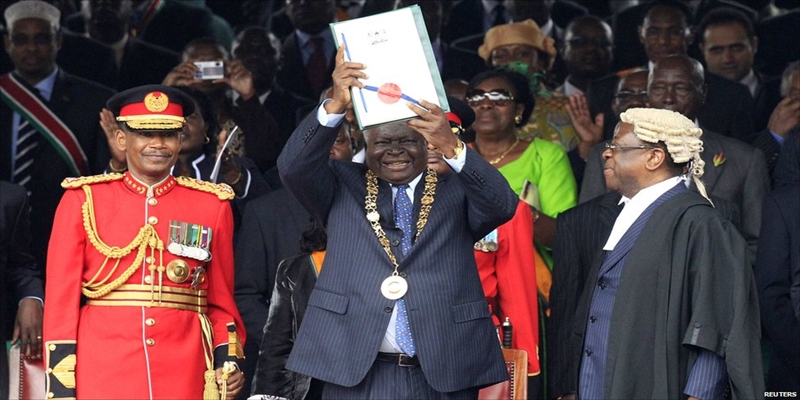 It’s prudent to overhaul a constitution if it’s majorly geared towards conforming to the changing trends in governance. However, two key proponents of the Building Bridges Initiative (BBI), behind the referendum push-President Uhuru Kenyatta and former Prime Minister Raila Odinga, have not stated to Kenyans the failures of the current constitution promulgated in 2010 to necessitate an overhaul.

The endemic corruption, inequality, nepotism, and other social evils which have dogged Kenya since 1963 do not require changing the law but, goodwill from leaders, citizens and other state actors like the anti-corruption body, the investigation agencies, the law enforcement, and the Judiciary.

Those who are against the “mutilation” of the current constitution should give credit to the 18th Century pioneers of separation of powers, since without them, governance decisions could have concentrated in our hierarchy.

Two Europeans-John Locke, and Charles-Louis and an American, Baron De Mentesquieu, wisely came up with a theory to structure governments into three tiers-the Executive, the Judiciary and Legislature.

President Kenyatta and the most legislators in the Senate and parliament are ardent supporters of a referendum. However, the Judiciary triggered a blow to the executive and legislature in a recent ruling by Justices Joel Ngugi, George Odunga, Jairus Ngaah, Chacha Mwita, and Teresia Matheka whereby, they declared the clamour for constitutional change under the BBI as unconstitutional and therefore, null and void.

It must be remembered that the historical nullification of the 2017 Presidential election by retired Chief Justice David Maraga adhered to the separation of powers dictum. Maraga, set the pace in respecting the law and the realities of constitutional democracy. The 2017 historic ruling, and the recent ruling by the high court is a clear demonstration that non-elected State officers like Judges tend to be more rational, progressive, and people-centred than elected ones. Why are Members of the county assemblies (MCAS), National Assembly and the Senate routing for a referendum without considering its repercussions to the country’s economy and governance?

The rejection of 6 Judges by the President is a clear demonstration that even as he presses to see the constitution overhauled, he does not believe in constitutionalism. The quest to have Judges who are friendly to the executive is dictatorial and a travesty to justice.

The current constitution has safeguards for good governance and economic growth

The MOST fundamental question many Kenyans are asking is this: Is a referendum to change our constitution a priority when the country is submerged in a myriad of challenges?

The current constitution has not barred President Kenyatta from crafting an inclusive government nor has it curtailed the government from netting culprits who siphon Kshs. 2 billion public funds a day as per what the President told Kenyans in January.

The long-term economic implications of passing a referendum are dire to the taxpayers who will be overtaxed to service a bloated Legislature and Executive.

The creation of a new power structure in the Executive - Prime Minister and two deputies when we have a president, and deputy will shoot the cost of running a government to the roof.

The suggestion to create 70 constituencies is bizarre. Kenya is already over-represented under the two-tier legislative chambers, Senate and Parliament.

The fiscal position in the country to fund (new bureaucracies) is putting priorities upside down especially this time when Covid-19 is ravaging the county with a new variant from India.  A vaccine to inoculate our people to mitigate the pandemic should be the government’s top goals.

The country’s external debt has hit a crescendo. Presently, it stands at a whopping 51.4% of its total debt stock of Kshs. 7.1 trillion.  The government hasn’t stopped borrowing from the Bretton Woods institutions, China and other external bonds.

Deputy President William Ruto is perhaps the only notable figure in the government who has openly opposed the referendum. This has endeared him to the masses at home and abroad under the “hustler nation clarion,” if the current political atmosphere in the country is something to go by.

Although “Punguza Mizigo” initiative shepherded by Dr Ekuru Aukoti floundered at the corridors of the Independent Election and Boundaries Commission (IEBC), was a better option than BBI because it would have addressed over-representation which has bloated the public wage burden.

Secondly, Odinga’s consistency and political philosophy must not go unchallenged. He needs to tell Kenyans why he came up with BBI whose contents are totally different from the OKOA Kenya initiative that attracted more support from Kenyans before failing the IEBC signatures threshold in 2016.

When leaders neglect past initiatives to launch new ones, it reflects a lack of principles in the pursuit of the public good. OKOA Kenya attracted great minds in the reform movement like Maina Kiai, John Githongo, Davinder Lamba and Martha Karua.

After the handshake with President Kenyatta, the ODM leader switched gears. He never talks about addressing historical injustices as captured in the Truth, Justice and Reconciliation Commission (TJRC), which earned him massive support in the last presidential elections.

If indeed BBI is for healing the country, why did it give a blackout to the TJRC, Ndungu Land, and Waki reports? These are sure avenues to address Kenya’s mess since independence.

To conform to modern trends of governance and public service, reviewing the constitution is normal.However, we must contend with the fact that the majority of those who lead us, lack ethical values. Even with a perfect constitution, it will be elusive to realize positive change when leaders lack probity. Positive change in any society is embedded in people’s hearts and minds. Changing the books without mind transformation is a waste of time.

In the book of Romans 12:2, the Bible says this about transformation: “And be not conformed to this world: but be ye transformed by the renewing of your mind, that ye may prove what is that good, and acceptable, and perfect, will of God.” The destiny of any society is pegged on actions, thoughts, mores, habits, and the characters of every citizen. Revising the supreme law of the land will never improve our ethics, honesty, and integrity.

What we need is the total implementation of chapters 4 and 6 of the current constitution which dwell on the Bill of Rights, leadership, and integrity. The BBI proponents should desist from putting the country in a campaign circus when the general election is barely14 months away?

If changing the constitution is a panacea for Kenya’s growth, how many times have the current President and a couple of his Cabinet Secretaries violated the constitution with impunity? It is foolhardy to change the law when you do not respect an existing one.

Nyaringo is the president of the Kenya Patriotic Movement, a diaspora lobby based in the US.

This article has been read 654 times
COMMENTS