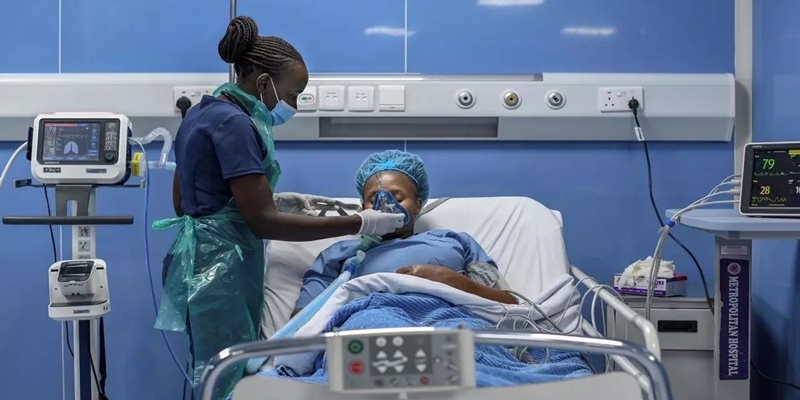 World leaders including the US President Joe Biden will be in Cornwall for the G7 summit next week. Unicef is urging them to start immediately donating vaccines to Covax, the body charged with ensuring the global south has vaccines, rather than waiting until they have inoculated all their populations.

This will help protect health systems, protect the vulnerable, and lower the risk of variants emerging and spreading around the world.

But while all eyes are on jabs, others are warning one of the only treatments we have for Covid-19 is being overlooked: without medical oxygen, a patient’s lungs become inflamed, they can struggle to breathe and potentially suffocate.

The Bureau started investigating oxygen shortages in August last year, after aid agencies warned more than 600,000 children a year die from pneumonia worldwide when medical oxygen and antibiotics could save their lives. They said the huge amounts of oxygen needed to treat Covid patients could exacerbate an already severe situation and that many health systems were unprepared. We dug into the prices and activities of the two companies that dominate the oxygen market in sub-Saharan Africa.

In February, a devastating second wave of coronavirus hit India, resulting in acute oxygen shortages. Tens of thousands lost their lives while people begged and bartered for oxygen cylinders on social media. The images of their funeral pyres shocked the world. But other countries – Brazil, Peru, Nepal and many others – have already reported similar oxygen shortages.

In Europe and North America, liquid oxygen is delivered by truck, stored in tanks outside hospitals, converted back to gas and piped directly to a patient’s bedside. But in many low- and middle-income countries this infrastructure doesn’t exist, meaning that medical oxygen is expensive and scarce.

Campaigners are urging governments and the international community to upgrade oxygen systems now rather than face a scramble to send equipment once crises peak. In light of this, the Bureau analysed data on the countries facing rising numbers of Covid patients and therefore surging oxygen needs, in order to identify the countries most in need of support.

How did we do this? By using data provided by the Every Breath Counts Coalition and non-governmental organisations PATH and Clinton Health Access Initiative (CHAI), as well as global vaccination data, to find the countries most at risk of running out of medical oxygen.

What the data disclosed was shocking.

As of this month, 19 countries around the world – including Argentina, Colombia, Iran, Nepal, Philippines, Malaysia, Thailand, Pakistan, Costa Rica and South Africa – need more than 50,000 cubic metres a day for coronavirus patients and in nearly all of these countries, fewer than one in 10 people has received a dose of a vaccine.

More than 30 countries – including Laos, Fiji, Vietnam, Afghanistan, Cambodia, Mongolia, Angola and Kyrgyzstan – may not have such high numbers of cases, but have seen their oxygen need at least double in the same time period, a sign they too could face shortages if the rise continues.

Robert Matiru, who co-chairs the Covid-19 Oxygen Emergency Taskforce, told the Bureau that if countries do not upgrade their oxygen systems or aren’t supported to do so, we could see the “total collapse of health systems, especially in countries with very fragile systems".

Medical oxygen makes up just 1% of global liquid oxygen production, according to Gasworld, with the rest being sold to mining, chemical and water treatment companies. During the pandemic, experts have called on countries to divert supplies of industrial oxygen to hospitals, as has happened in countries such as India and Pakistan. Yet Gasworld data obtained by the Bureau shows that many of the countries most in need would still suffer shortages even if all local liquid oxygen production was diverted to hospitals.

In the long term, campaigners want governments to negotiate with gas companies for better prices for liquid oxygen for hospitals and to invest in better infrastructure. That may mean:

•  an oxygen plant at every hospital

•  medical engineers to maintain the equipment

•  staff who are trained to use different types of oxygen equipment, detect patients with low blood oxygen levels and give them treatment.

Oxygen is not only used for Covid but is an essential medicine for pneumonia and sepsis, in anaesthesia and childbirth, and to treat trauma and accident victims. Upgrading oxygen systems for Covid-19 would benefit the health system for years afterwards, experts said, including bolstering a country’s defences against future respiratory pandemics.

The US, German and Canadian governments have donated to the World Health Organization’s emergency oxygen taskforce, and France has donated supplies directly to countries like India, but campaigners are calling on the other G7 countries to follow suit.

For the thousands that have already died it is too late. But continued reporting and action on this issue could help avert more preventable deaths.

This article has been read 80 times
COMMENTS