The Sham Ethiopian Election and the Crowning of a Tyrant 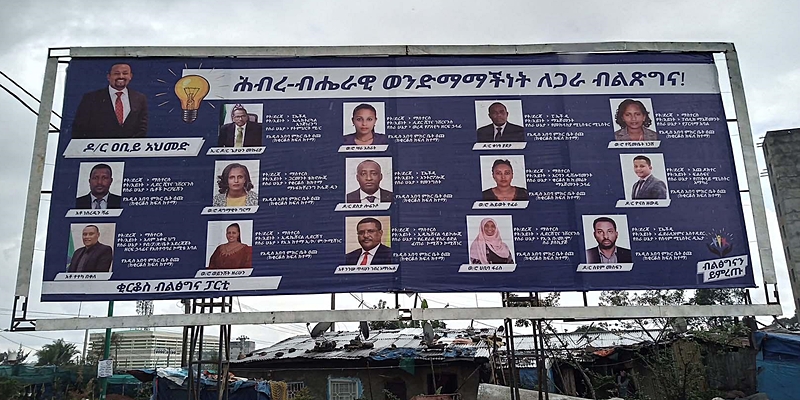 and in many areas people cannot vote. The overall result is not in doubt. For Abiy, who has said his mother

prophesied that one day to be king, it is less an election than a coronation”

When Abiy Ahmed became PM in April 2018, the hope was he would build on the economic and social development achievements of the EPRDF and address the significant deficit in democracy and good governance inherited from previous EPRDF governments. In the early months the liberalising of the political landscape, media and the freeing of political prisoners appeared promising. Moreover, in addition to the hoped domestic reforms, the rapprochement with the Eritrean regime and the willingness to settle the Ethio-Eritrean boundary issue and the ending of the “no war, no peace” impasse with Eritrea caught the imagination of the populace as well as external onlookers. It was on these postulates that he was awarded the Nobel Peace Prize in 2019.

Yet, over three years Abiy Ahmed has proved beyond reasonable doubt to the country and the world at large to be the exact opposite. He is the most tyrannical leader the country ever had. It is painful to say that Mengistu Hailemariam, the epitome of dictatorship, would look a closet liberal or a democrat by comparison. Within less than two years virtually all the leading opposition leaders including the leaders of the most populous Regional State in Ethiopia, Oromia, Jawar Mohammed, Bekele Gerba, Doud Ibsa; Iskandar Nega and Lidetu Ayalew, leading Amhara politicians in Addis Ababa; Abdi Mohamoud Omar, the elected President of the Regional State of Somali; the nationalist leaders of Wolaytta; and the elected leaders of Tigray are languishing in prison.

The much hyped rapprochement with Eritrea was completely dashed; instead Abiy invited the Eritrean army to invade and occupy Tigray, an integral part of the country, which by any definition is the ultimate treason. Instead of heralding regional peace, the Eritrean regime has been at the centre of the political crisis engulfing the country and threatening the very survival of the Ethiopian state and the security and stability of the Horn of Africa.

When Abiy unconstitutionally postponed the Ethiopian General Election in 2020 on the excuse of the Corona Pandemic, the real motive was very clear. Had he held the election in June 2020 with all the leading parties being free and competing, the outcome would have been decisively against him. He would have lost very heavily against the OLF and OFC in Oromia, the largest region comprising 35% of the population; against the OLF and OFC and the Balderas and Lidetu Ayalew’s Parties in Addis Ababa, the most popular parties amongst the Amharas and Oromo populations in Addis Ababa. Similarly, significant number of residents in Addis, such as Tigrayans and Wolayttas, would not have voted for PP. Even in the Amhara Regional State, it is questionable whether Abiy’s PP would gain a majority given the popularity of the nationalist Amhara National Movement (ANM). In Tigray Abiy’s PP would not even try and would have lost its deposit if there were such a thing. Hence, the general election scheduled in June 2021 is one-horse race given all the leading political party leaders are incarcerated or exiled and their political organisations completely destroyed. The potential electoral map of the country and the mathematics of the constituencies in the country are clearly and simply stuck against the PP. We all know Abiy and his PP have no significant social base in Oromia, Addis Ababa, the South, Afar or Somali. It has a base only in parts of Amhara and Addis Ababa, which together account for less than a quarter of the country’s population.

The pre-election rigging of the election is mindboggling as it is shameful in its ignorance of certain basic statistical consistencies, such as that the total number of registered voters cannot exceed the number of voting age population; and that the number of people who vote cannot exceed the number of registered voters and so on. Yet, the registered numbers of people in the Somali and Afar regions are respectively 150% and 135% of the total voting age populations of the regions. Similarly, ten days before the end of registration we were told that only 200,000 Addis Ababa residents had registered and suddenly the number went up to 1.8 million. Ballot papers are already being distributed by PP cadres and government functionaries as confetti. Voter apathy is such that the PP and government functionaries are visiting households in order to coerce them to register and to instruct them to vote for PP. The state media are acting as organs of the PP with complete monopoly of party propaganda. The fusion of state and party functions, which was prevalent during the old EPRDF, has been taken to even much higher level and where the ruling party is hegemonic in all institutions and spheres of life of the country. All these make the outcome of the fake election a certain victory for the ruling party.

Moreover, the sham election is taking place when the majority of the regions in the country are under military command posts that restrict democratic campaigning with the exception for the PP. There is no semblance of civilian administration or stability in the country, and there is widespread civil unrest and millions of are dislocated; and a genocidal war is being waged in Tigray. Similarly, a widespread repression and war is taking place in Oromia and Benishangul, which all make the upcoming election a mockery and a travesty of democracy.

Empirically and objectively, the upcoming election in Ethiopia is simply geared to the Amhara Regional State where there will be uneven contest between the PP and the ANM. There is no doubt that the Amhara PP would rig the election in its favour perhaps leaving a few seats to ANM. The contest in Addis Ababa would again be uneven contest between the PP and EZEMA, where a few seats would be reserved for the latter, perhaps a couple or more seats for Balderas. The contest in Oromia will be a pure one horse race and the PP will win overwhelmingly given the complete absence of a contest.

It is a complete misnomer to call the June 2021 Election an Ethiopian election. The reality is it is an election taking place in the Amhara Region and in Addis Ababa, where the Amharas are the single biggest population in the Capital, and it is uneven contest between Amhara parties. The outcome of the rigged election is a forgone conclusion where the PP wins an overwhelming majority and a tiny number of seats reserved for EZEMA, ANM and perhaps a handful for Balderas.

One of the saddest and shameful aspects of Ethiopia’s descend to dictatorship is the role of the National Electoral Board of Ethiopia (NEBE), in particular the role of its President Birtukan Mideksa. Over the last three years, the NEBE has proved to be dependent on and partisan to Abiy’s PP and Birhanu’s EZEMA. A stooge, pure and simple. The NEBE has broken every substantive rule of the Electoral Law from party registration to deregistration; complaint handling; election scheduling to pre-election processes. It is ironic but not inexplicable that Birtukan Mideksa has done everything that she objected to the process and outcomes of the 2005 general election. In cahoots with PP and EZEMA she has rigged the processes and outcomes of the forthcoming so-called general election. Like the hyped but false democratic pretence of Abiy Ahmed, the NEBE has been instrumental in enabling and facilitating the establishment of a dictatorship and the crowning of a tyrant.

The refusal to participate as election observers by the European Union and the Americans is obvious given the patently sham nature of the June Election. This denies the tyrant legitimacy as he sees it. What dictators do not understand is that the ultimate legitimacy comes from the people, which he lacks now and also after the sham election.

In summary, the upcoming general election will register as one of the most shameful elections ever held in Ethiopia even by African standard. In effect and in its purest sense it will be a coronation of a megalomaniac and narcissist tyrant who is hell bent to be the 7th King of Ethiopia, as he had no shame to tell us beforehand. If justice is to be done there is widespread, credible and verifiable evidence from multiple sources that Abiy Ahmed and his mentor, Isaias Afewerki, could be indicted for war crimes and crimes against humanity as well as for the genocidal acts of ethnic cleansing of a nationality and people, which is equal in scale and magnitude to the genocides in Rwanda and Darfur. The tragedy of the upcoming so-called general election is the dire consequences that follow. Instead of leading to a political dialogue of all stakeholders to resolve the country’s crisis it is bound to further compound Ethiopia’s political ills making a peaceful resolution of the challenges facing the country even much harder.

This article has been read 170 times
COMMENTS