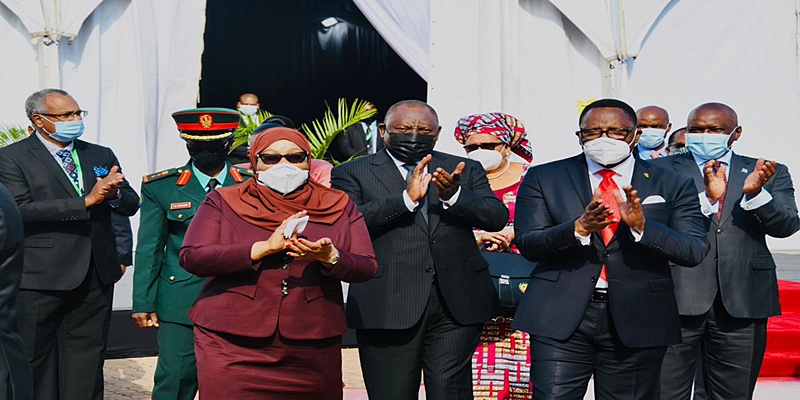 After several months of diplomatic negotiations, the 16-member Southern African Development Community (SADC) have finally approved the deployment of joint military force with the primary responsibility of ensuring peace, stability and normalcy in Mozambique. The decision brings to an end months of deliberation and disagreement among the bloc about what is needed to stem an insurgency that threatens to open up southern Africa’s first jihadi front.

The standby force, a notable result of negotiations, will be part of a regional defence pact that allows military intervention to prevent the spread of conflict, according to SADC Executive Secretary, Stergomena Lawrence Tax, during the Extraordinary Summit of the Heads of State and Government of the Southern African Development Community (SADC) held at Joaquim Chissano International Conference Centre in Maputo, Republic of Mozambique on June 23.

The summit discussed progress on combating terrorism and assessed the results achieved in pursuit of the motto SADC: 40 Years of Building Peace and Security and Promoting Resilience in the Face of Global Challenges.

The deployment of troops to Mozambique will help the country combat the rapidly escalating Islamic State-linked insurgency that threatens stability in the relatively peaceful region, according to the communique issued following a meeting of the southern African leaders in Maputo. The communique neither divulges the number of troops to be involved, when they would be deployed nor their role.

Mozambican President Filipe Nyusi who has historically been resistant to foreign boots on his grounds now appreciates SADC’s partnership in the fight against terrorism in Cabo Delgado.

‘’We are certain that we will have SADC as an active and main player in this fight. We will not rest until we find the final victory: which is peace and progress in every corner of our region,’’ President Nyusi, who is also the current president of SADC, says.

Terrorism is a global threat. It requires joint intervention. In that light, the European Union military mission’s support and training of Mozambican troops to tackle the Islamic State could be approved in July. Foreign Minister Augusto Santos Silva hopes that the mission will be given green light during the next meeting of EU foreign ministers scheduled for July 12.

Mozambique has been grappling with an insurgency in its northernmost province of Cabo Delgado since 2017 and violence has grown significantly in the past year. Dozens of civilians have been killed in Islamic State-linked attacks in the coastal town of Palma. In April, a US$20 billion liquefied natural gas project run by oil giant Total was brought to a halt by the violence. According to the United Nations, more than 900,000 people are under severe food insecurity in Cabo Delgado, and host communities are in urgent need of shelter, protection and other services.

According to the EU Foreign Policy Chief, Josep Borrell, the military training mission is likely to be in place in Mozambique within several months. Portugal, which holds the EU's rotating presidency until the end of the month, has already sent 60 soldiers to Mozambique to train local troops.

Within its framework, the bloc is to promote sustainable and equitable economic growth and socio-economic development, forge deeper cooperation and integration, to ensure good governance and durable peace and security, so that the region emerges as a competitive and an effective player in the southern region, in Africa and the world.

The author frequently writes about Russia, Africa and the BRICS.

This article has been read 271 times
COMMENTS