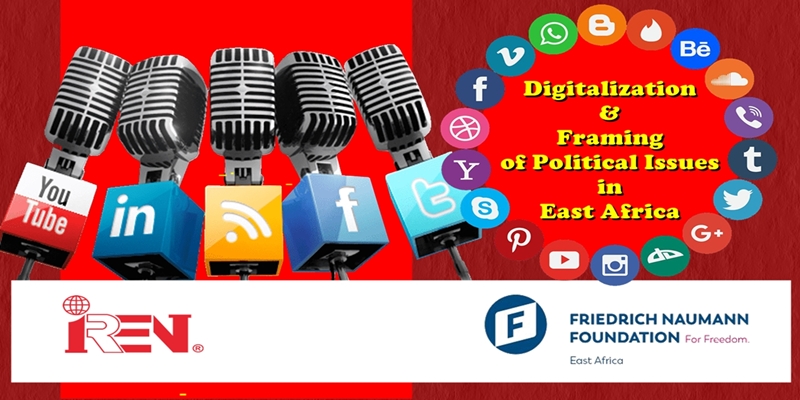 Digitalisation and Framing of Political Issues in East Africa

For over 18 years, IREN has organised and hosted a number of high-profile Think Tank platforms that catalyse for ideas and action through research- based advocacy and evidence-based commentary on pertinent issues. The forums have attracted participants with varied professional backgrounds from across the globe. The Think Tank Platforms include the IREN Eastern Africa Media Forum, The IREN Eastern Africa Thought Leaders Forum, The African Executive online opinion magazine and The Africa Resource Bank Forum.

The IREN Eastern Africa Media Forum targets media practitioners and aims at exposing them to factors that influence global trends and advancing the African agenda. The IREN Eastern Africa Thought Leaders Forum seeks to nurture futuristic thinking and evolving of home-grown solutions to the region’s socio-political and economic challenges. The African Executive online opinion magazine that runs every Wednesday offers a platform to Africans and non-Africans interested in Africa to brainstorm on issues that will make Africa prosperous and meaningful player in the international arena. The Africa Resource Bank Forum aims at providing a business approach to African challenges, improving the policy environment for business in Africa and promoting ideas and strategies that will enhance prosperity in Africa.

In May 2021, IREN held The 19th IREN Eastern Africa Media Forum whose theme was Digitalisation and Framing of Political Issues in East Africa.

The forum was informed by the fact that the current dynamic media environment is developing in novel, sometimes unanticipated, ways that have a bearing on democratic governance and politics. It has facilitated the production, dissemination, and exchange of content on platforms and within networks that accommodate interaction and collaboration, radically transforming the media system, redefining the role of journalists, governance and how citizens engage in politics.

Established mass media institutions that predate the Internet now coexist with new media that are the outgrowth of technological innovation. The litany of new media, which includes websites, blogs, video-sharing platforms, digital apps, and social media are relaying information directly to individuals without the intervention of editorial or institutional gatekeepers. They have changed the game, allowing incumbents and newcomers alike to speak directly to constituents on everything.

Overall Objective: To explore the evolution of digital communication apps and their impact on framing of political issues in East Africa.

East African journalists were also asked to share Cartoons, Pictures, Tweets, Facebook posts and Videos that had a political message and consequence in their country, discuss their submissions and comment on the impact of evolving digital communication apps and the 5G era on journalism.

In addition, a Tweeter chat with journalists was held. A highly summarised discourse of the chat is as below:

1. What role does political framing and narratives play in democratic space in the East Africa Region?

They observed that political framing and narratives can undermine people’s decision-making, regulate perception, enhance mass control and sometimes spurs exclusion. Minorities often distance themselves from politics simply because of how they are framed. The framing of some of the regional leaders as the only leaders who can bring about stability and development in a country has led to legitimisation of dictatorship. In Rwanda, political framing and narratives led to the killing of 800,000 ethnic Tutsis and moderate Hutus by Hutu militias in 100 days of bloodletting. French President Emmanuel Macron’s admission of his country’s “responsibility” in the 1994 Rwandan genocide and his remorse at the Kigali Genocide Memorial, where 250,000 victims of the mass killings are buried aims to paint a picture of a Europe that is sensitive to African realities. Germany’s 1.1 billion Euros compensation to Namibia over the Herero-Nama genocide that saw tens of thousands of men, women and children shot, tortured or driven into the Kalahari Desert to starve by German troops between 1904 and 1908 conveys the same message. Political narratives determine how people participate in the democratic processes in different East African States. Democracy as a social software is in itself being reprogrammed by #digitalisation.

2. Who tends to dominate and control political narratives in the region?

3.What examples have been deployed or used? what outcomes?

In Uganda, the introduction of the social media tax in 2018 led to a decline in internet subscriptions by 2.5 million in the first 3 months of implementing the controversial law. In Uganda, riots cropped up simply because politicians asserted that @HEBobiwine had been arrested. At times, citizens have boycotted voting because they believe that the election has already been rigged as alleged by politicians. Cambridge Analytica was hired by one of the major political parties in Kenya during the 2013 and 2017 general elections. Result: Highly ethnic-charged & divisive election campaigns. In Kenya, before politicians fall from grace, a series of editorials on scandals are leveled against them. By the time their goose is cooked, public opinion is against them. When election seasons come, governments hire and deploy social media ambassadors to spin and deploy certain messages in their favour. Opposition political parties also do this—each countering the development narratives of the other. Governments are increasingly paying Internet propagandists to sway public opinion, manage dissidence, or change perceptions of dominant views in what is called astroturfing. So far, cartoonists in East Africa are the best narrative busters!

4. How have digital platforms helped to amplify such narratives or deny other narratives in political space?

They use the power of budget, followership, viewership, fake Facebook accounts, and propaganda to buy legislators, create presence, sway public opinion, domination, mudsling the others, impose court cases against them or buy them out of business. In the lead-up to the 2021 elections in Uganda, the government created fake Facebook accounts to sway public opinion regarding the popularity of President Yoweri Museveni, especially among youthful voters. In Burundi, journalists expelled by the late president Pierre Nkurunziza in 2016/17 used Twitter, Facebook, WhatsApp & SoundCloud to report the state’s misinformation & disinformation campaigns.

Respect for the rule of law and civil liberties is in steep decline in East Africa. While governments in the region have enacted legislation promoting civil liberty, they are restricting the space for the enjoyment of this right.  The litany of new media bypasses editorial or institutional gatekeepers and relays information directly to individuals, sometimes “doctoring” narratives to meet certain ends.

5. Has the use of digital platforms in amplifying political narratives impacted on role of professional journalists

Yes. What was considered ‘gutter’ news has gained prominence and mainstream media has no option but to tag along for followership. A new cadre of proffessionals who never went to Journalism classes are driving the conversation. There is now a wider audience for journalists in terms of reach and numbers. A Journalist can now communicate to more people since the world is a global village and a person millions of miles away can receive a text message within seconds. Journalists can now easily source for news on social media. They don’t necessarily have to go to the field since they can get tips on stories via social media. The platforms have also forced professional journalists to work hand in hand with citizen journalists. Over the years, the arts have been great narrative busters then science ...the two combined can deliver big!

6. Any thoughts on the 5G role out and future of political narrative control in the region?

5G is a game changer. It means faster crunching of data, more analytics, and thus more programmed campaign messaging. It also means access to faster internet which translates to revamped exposure of the masses to political narratives. 5G will accelerate the transmission of visual communication for an increasingly visual demographic. Usage of videographics will increase as a means of shaping political opinion in new, pithy, creative and impactful ways.

If AI crunches numbers and directs narratives, is the premise of voting in a democracy going to “stay” at home? Probably, robot voting will be the new normal, but this would a malicious trend because vote tampering is inevitable. The significance and centrality of professional journalists with respect to political narratives may wane as citizen journalism rises. If digital messaging has intensified in the 3 and 4G era, let us brace for an inundation of heightened and tech narratives in the 5G era. But in countries where reprobates continue to hold positions of influence in the licensing regime, 5G for all its good and promise will have to wait.

7.How should media practitioners address the framing of political issues?

They must go tech to detect competing narratives and choose sides. Observance of objectivity, neutrality, ethics of public good and fact checking will help.

Desktop research on Digital Communication Platforms and How They Are Impacting the Framing of Political Issues in East Africa under subtitles:

1. How digital communication apps have impacted the framing of political issues in East Africa.

6 videos on Digitalization and Framing of Political Issues in East Africa from 3 East African Countries (2 each from Kenya, Uganda and Tanzania) that carried:

•Any 3 of the following: Cartoons, Pictures, Tweets, Facebook posts and Videos that had political message and consequence in their country and an explanation of the underlying message of the media items cited.

•Their view on how embracing the 5G era will impact on journalism These videos were edited for clarity and consistency.

Founder of Zeda (zedamagazine.com) Mwende is an award-winning blogger and podcaster on    her platforms mwendengai.com and Mwende says.

Fact-checker, Presenter and Investigator in Media Challenge Initiative on a Fact-checking show, #TheDebunkShow and Host of Mighty Drive online show.

This article has been read 620 times
COMMENTS