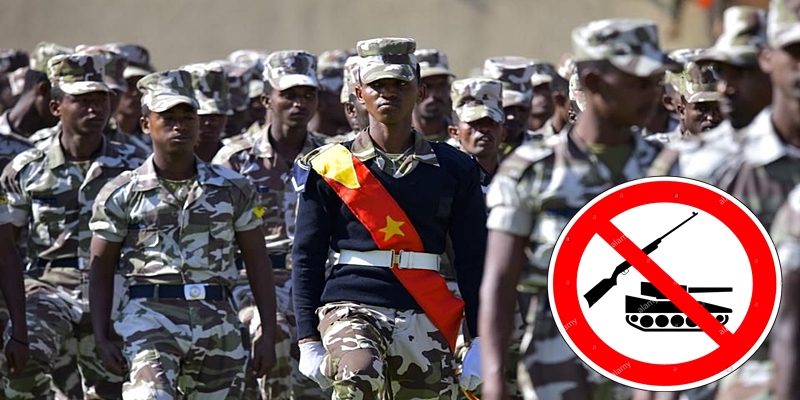 The people of Tigray have suffered incalculable human, material and mental suffering in the hands of the Eritrean, Ethiopian and Amhara brutal forces. The international community more generally, and the United Nations Security Council (UNSC) specifically, must stand with victims of genocide and other gross crimes, and not with the Abiy, Isaias and Amhara leaders, who have perpetrated a well-planned mass crime, including systemic rape, starvation, atrocities, forced eviction and total destruction of livelihoods. Any face-saving initiative of peace, including a ceasefire must be comprehensive, durable and just. Any abuse of the UNSC framework to save the ailing Ethiopian and Eritrean regimes should not be accepted, and the world community, including the Council, must make a measured move to remedy its catastrophic failure to protect millions of Tigrayan civilians.

For the last eight months, the Tigray population has been a victim of heinous war crimes, crimes against humanity and genocide. A well-coordinated military aggression has been launched by the Eritrean, Ethiopian and Amhara leaders, backed up by the Emirates and the State of Somalia, against the people of Tigray resulting in immeasurable human suffering and a devastating socio-economic destruction.

Tens of thousands of innocent civilians have been murdered, gang-raped and gravely assaulted by the three forces with impunity.  Human bodies have been deliberately exposed to wild animals. Villages and private homes have been burnt to ashes by Eritrean, Ethiopian and Amhara forces. More than 2 million Tigrayans have been forcibly evicted from their homes. The entire private and public economic wealth of the region has been looted, destroyed and vandalised, as part of the genocidal agenda pursued by the aggressors.

Isaias Afewerki of Eritrea, Abiy Ahmed of Ethiopia and Amhara elites have utilised rape and starvation as weapons of war in Tigray. Millions of Tigrayans have been subjected to hunger and  famine. The Ethiopian regime has also incarcerated, abused and harassed tens of thousands of Tigrayans in central Ethiopia. The Eritrean regime has forcibly kidnapped thousands of Tigrayans, their whereabouts is not known.  The Eritrean regime has kidnapped, murdered and attacked around hundred thousand Eritrean refugees in Ethiopia.  The retreating Ethiopian/Eritrean forces from Mekele, the capital of Tigray, have confiscated UNICEF’s communication facilities in the city.

Shamefully, Russians, Chinese, Some African states and other partners have sabotaged and obstructed any formal discussion of the UN Security Council on the topic, let alone allow it to carry out its responsibility.  This means that the Council has failed the people of Tigray, the Charter of the United Nations, Geneva and refugee Conventions.

The people of Tigray are paying a colossal price to liberate themselves from Abiy and Isaias’s aggression and oppression. In the last two weeks, the Ethiopian army has been defeated miserably by the sons and daughters of Tigray.

However, the forces are still re-grouping themselves from all directions of Tigray –they are mobilising, training, coordinating and reorganising to complete their criminal project of genocide and crimes against humanity sooner or later.   They are denying banking, telephone, water and electricity services to millions of civilians. The Ethiopian Ministry of Affairs has plainly said that it will relocate the budget that was dedicated to Tigray to other parts of Ethiopia.

Tigrayans are entitled to continue their fight against the aggressors and genocidal forces on several grounds: first, to help and defend themselves as a people from foreign subjugation; secondly, to stop the genocide and other crimes that have materialised in the last eight months; and thirdly, to defend their freedom and identity as an ethnic and national group through a necessary and proportionate means.

Any initiative of peaceful resolution of the Tigray conflict must acknowledged these facts and necessities without hesitation.  If not, it won’t work.

It is not too late for the world community, and the United Nations Security Council (UNSC) more specifically, to remedy its tragic failure. It has to initiate a genuine and comprehensive peace process to end the war, international crimes, and human-induced mass deaths. Any peaceful resolution of the conflict ought to embrace, at least, the following:

1)  addressing the most urgent threats to, and needs of, the people of Tigray, including concretely containing the Eritrean, Amhara and federal forces’ existing and potential imminent and tangible threat against civilians, their cities, towns and villages;

2)  restoring all public services (including water, electricity, telephone, internet, banking, etc) without any condition whatsoever and with immediate effect; this should include providing (or not hindering) immediate financial and other crucial help to farmers before the farming season is gone for them;

3)  opening up all corridors of humanitarian aid to provide unfettered relief delivery to the millions of Tigrayans without any condition;

4)   returning the 1.2 million Tigrayans who have been evicted from western Tigray and elsewhere and providing them with financial and material support so that they build their lives from scratch; this should including re-settling the over 2 million internally displaced people and the over 70,000 refugees who fled to Sudan;

5)  releasing the tens of thousands of Tigrayans who are put in concentration camps across Ethiopia and are languishing in prisons due to fake and politically motivated criminal charges made against them simply because they belong to the Tigray ethnic group; this should include the unknown number of kidnapped Tigrayans who have been taken by the Eritrean forces to undisclosed locations in Eritrea;

6)   introducing no-fly zone and imposing arms embargoes on the offenders so that they are prevented from completing their genocidal agenda from now on;

7)   formally disbanding the Tigray interim administration and reinstating the legitimate government of the Tigray regional State;

8)  returning private and public property, including factories, machineries, vehicles, etc. from Eritrea, Amhara and other parts of Ethiopia; this should include financial and material assets of endowments; acceptance of full compensation to private citizens and the regional state by the Ethiopian and Eritrean states must also be taken into account;

9)   accepting and conducting an international inquiry into the crimes committed and the destruction done on Tigray with the aim of referring the case to the International Criminal Court; the so-called join investigation of crimes with the Ethiopian criminal regime must end as the Ethiopian regime is, firstly, one of the sponsors of the atrocities and destruction, secondly, it is now ousted from Tigray, and thirdly, Tigrayans don’t have faith on such an arrangement;

10) formal declaration of guarantee of non-repetition of genocide and other universal criminal offences by the Eritrean and Ethiopian states and the Amhara elite; and

11)  denouncing the international crimes committed against Tigray civilians, in particular the use of sexual violence, extra-judicial killings, starvation and ethnic cleansing, by the Council, as grave violations of international norms.

What should not be acceptable?

Any attempt to impose terms on the people of Tigray, their defence forces and regional government in the name of peace and humanitarian necessity would amount to repeating the failing and betrayal of the Council to Tigrayan victims and survivors.  If, however, some powers attempt to save the ailing Ethiopian and Eritrean regimes, by imposing terms on victims of aggression and extreme oppression, they have to be challenged by the international community, by Tigrayans and their justice loving friends.

A comprehensive peace process that can deliver averting famine and hunger of millions in Tigray; durable peace; freedom, justice and accountability; timely resettlement; and compensation and reconstruction of Tigray, are absolutely necessary.

This article has been read 141 times
COMMENTS