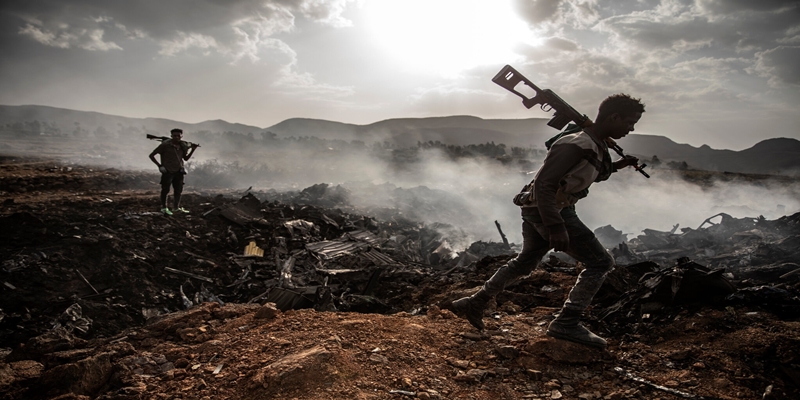 We, the Global Society of Tigray Scholars and Professionals (GSTS), are continuously receiving harrowing news of ethnic-based mass harassment, abduction, confiscation of properties, imprisonment and torture and extrajudicial killings of Tigrayans living outside Tigray in Ethiopia.

We realized that this state-sponsored harassment and ethnic profiling has alarmingly increased after the Nobel Peace Prize Winner, PM Abiy Ahmed, recently publicly accused the people of Tigray for all the failures and political crises in Ethiopia.

Several government line ministries, including the Ministry of Defense have scaled up these allegations, and they are vilifying and demonizing Tigrayans using official government and social media outlets. Following the genocidal call by Abiy Ahmed on Tigrayans, his advisors and supporters have been publicly calling for the extermination of Tigrayans living outside Tigray.

At present, Tigrayans living in many parts of Ethiopia, including Addis Ababa, Bahir Dar, Gondar, Nazeret, Arbaminch, Awash Arba, Dire Dawa, Kombolicha, Benshangul, and Gambella, are being hunted, harassed, abducted, their businesses confiscated and imprisoned indefinitely. Many others are disappearing on daily basis. Businesses owned by Tigrayans are being ransacked, confiscated and dispossessed, with business owners not cooperating with Abiy’s regime being sent to prison and some disappearing. Credible sources and international media outlets have confirmed that these detainees are in very harsh conditions and the whereabouts of tens of thousands remain unknown and unaccounted. The newly assembled concentration camps lack basic facilities, including drinking water, food, toiletries, menstrual pads et cetera. These harsh conditions along with the risk of COVID-19 contraction create major threat to the lives of these tens of thousands of civilians.

We have learned that the government is transporting many of them into concentration camps recently assembled for this purpose. We are informed that some of these Tigrayans detained from Addis Ababa are transported to a concentration camp in Awash Arba. Some reports also indicate that thousands of Tigrayan detainees are being taken to Eritrea forcefully.

We note that these systematic atrocities are not isolated incidents, rather parts and parcels of the genocidal war and ethnic cleaning waged against Tigrayans in the last 8 months. These are direct extensions of the arrest and torture of more than 17,000 Tigrayan officers who were serving in the Ethiopian National Defense Forces and some forcefully returned from UN and AU peace keeping missions before and just after the start of the war on Tigray on November 4th 2020. We also would like to remind that before this renewed and widespread genocidal imprisonment, there have been reports that close to 52,000 civilian Tigrayans have been imprisoned just because of their identity from several parts of Ethiopia. These reports indicate torture and extrajudicial killings of some of the imprisoned military personnel and civilians.

The scale and target of these recent arrests and harassments are unprecedented. We are gravely concerned that the scale of arrest and harassment will knock on every Tigrayan household living out of Tigray if the hate speech orchestrated by Abiy’s government and being campaigned by its social media activists continue unabated. Abiy’s regime and associated media outlets have intensified their abhorrent campaign of othering, profiling, intimidating, detaining, torturing and extrajudicial killings of civilian Tigrayans living outside of Tigray. We learned that these recent arrests and abductions are being conducted in collaboration with the security and intelligence officers from Eritrea, who have been operating in Ethiopia since the outbreak of the war in Tigray.

These atrocities and ethnic profiling are clear violations of international laws. Most importantly, these ethnic cleansings are against the “Convention on the Prevention and Punishment of the Crime of Genocide” approved by United Nations member states in 1948. This treaty was meant to ensure that “never again” would any person face the horror of genocide. However, it is heartbreaking that the international community is watching idle while another holocaust against Tigrayans unfolds in the 21st century.

We particularly alert the diplomatic community in Addis Ababa to pressure the Ethiopian government to protect civilians.

An immediate priority should be pressuring the regime to:

i.    halt the hate speech and campaign targeting Tigrayans by government media, and
ii.    release all detainees without any preconditions. The diplomatic community in Addis Ababa have the moral duty to stop these reckless ethnic profiling, arrests, abductions and harassment of Tigrayans by the regimes in Ethiopia and Eritrea.

GSTS is carefully following these events and avails itself for further consultation and cooperation.

This article has been read 246 times
COMMENTS