Science and Religion On COVID-19: Approaching the Pandemic from A Critical Dialogue Perspective 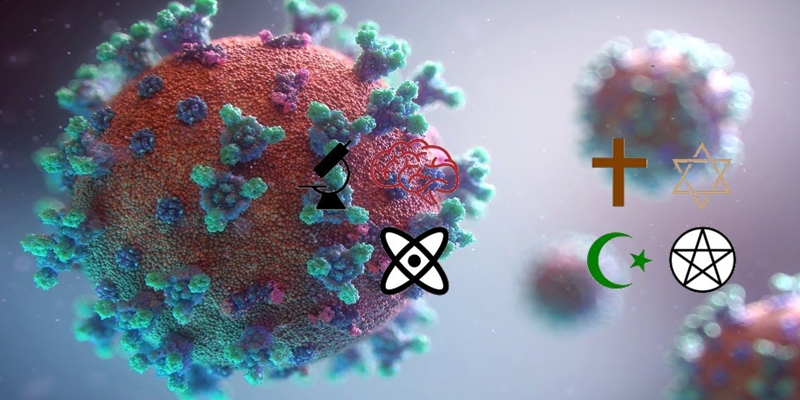 The current exchange of pros and cons in the country through the social media on how to approach the second wave of the COVID-19 pandemic, now being called euphemistically ‘acute pneumonia’ in certain local circles, is a symptom of what others have called, at best, the “We-are-not-OK” syndrome, and at worst “obscurantism”!

Having reviewed some of the ideas and arguments put forward from both sides of the protagonists and antagonists, I have realized that our society, in some ranks of its leadership, is now becoming not OK in terms of critical thinking, and has begun to develop symptoms of intellectual obscurantism, in both areas of scientific and theological inquiry!

Having been educated to the level at which I have developed both theological and scientific common sense, I feel very strongly obliged and duty-bound to contribute towards the resolution of the ‘dangerous antagonism’, now growing its ugly head in our society! It is a dangerous antagonism because it may split our nation into two warring camps: between those who are protagonists of faith/religion at the expense of reason/science (i.e. obscurantists), and those who are protagonists of reason/science at the expense of faith/religion (i.e. the ‘we-are-not-OK’ camp).

What is happening now is an indictment of our society: our educational system, which is shaping our society, now, is so weak in terms of developing our critical thinking faculties, and so unfortunate in terms of nurturing moral integrity in the medical profession that it deserves to undergo ‘epistemological surgery’! The current antagonistic exchange on COVID-19 provides a very good opportunity for such a surgery; that is: our society should now engage itself in a new level of critical dialogue and mutual understanding between scientists, philosophers and theologians on how to approach the pandemic.

Such a dialogue will replace the perspective of mutual suspicion, apparently now beginning to pervade confusingly both the faith/religious communities and the reason/science circles. We now need an intellectual vision to develop and maintain critical dialogue on science and religion if we want to win this war against obscurantism and against ‘we-are-not-OK’ ideologically occasioned by the prevailing COVID-19 pandemic.

I have pointed out above that our educational system is an indictment of our society in terms of critical thinking and moral integrity. The question is: What else can bring this indictment upon us if not philosophical poverty in mediating the antagonism between theology and science on the COVID-19 pandemic? Are we so philosophically poor that we cannot have a critical dialogue together? What of the Theological Commissions of the faith-based organizations (FBOs) and our national Commission for Science and Technology (COSTECH)? Can’t these wake up and help our country to resolve the situation, or are they also (God forbid!) suffering from abject philosophical poverty such that they cannot mediate responsibly the antagonism? They are organs that can grab the opportunity to build a substantive and constructive relationship between science and religion.

In other words, let the theologians and scientists take each other with extreme seriousness, and interpret the predicament through the lens of philosophy so that they contribute towards what one would call ‘professional unity with moral integrity’ between science and religion. However, they can only do so if both sides are ready to take part in the process from a critical dialogue perspective. Such a perspective which makes one open, and not dominant and authoritative, in the search for truth in the depths of human experience and in the search for truths about nature mysteries, like the viral universe of COVIDs! This dialogue would lead to a common ground, one which respects the limitations and competencies of the theological and scientific disciplines respectively.

Unfortunately, obscurantists and those who have made us “not-OK” have occupied the publicity platform so much so that theologians are not sure how far they should go in their effort to incorporate proven scientific theories about COVID-19 into theology and use them for enlightening the society about crucial beliefs in connection with the human predicament, rather than leaving the society wallow into superstition! Meanwhile, unfortunately also, the professional scientists (who by the way all of them are believers!) have also been so flabbergasted by powers that be that they have put aside their professional criticality at the expense of intellectual honesty!

However, and this is very important, we must be sure what approaching the pandemic from a critical dialogue perspective entails! It entails the following: in the process of dialoguing critically, our scientists can purify religionists from error and superstition; and our theologians can purify scientists from technology idolatry and false absolutes. Therefore, each side can bring the other into a wider world of consciousness, so that religionists do not profess a pseudo-science, and scientists do not become theologically unconscious to the extent of denying God!

May I now conclude by appealing to both sides of the antagonistic exchange that only critical debate, one which is guided by philosophical criticality and intellectual honesty, will help us overcome every aggressive and regressive tendency to unilateral reductionism and obscurantism, to fear and to self-imposed censorship and isolation. In critical dialogue between science and theology, each discipline will continue to enrich, nourish and challenge the other to become more meaningful in contributing our vision of who we are as human beings, beings endowed with reason and faith, in the quest for deeper understanding of the ultimate truth. A critical dialogue will help us mature in terms of knowing fundamental truths about human life.

Let, therefore, our Tanzanian theologians and scientists utilize their philosophical acumen (after all aren’t they all who are members of COSTECH and Theological Commissions PhD holders ?) use their reasoning critically especially now because of the fact that the search for ultimate truth is being obfuscated by obscurantism and superstitious ideologies. Let them assure us that science cannot be used in a simplistic way as a rational basis for religious belief; also that it cannot be thought to be by its nature atheistic, opposed to belief in God as obscurantists make us belief!

The author is currently working with the Catholic Bishops Conference (TEC) as the Director for Justice, Peace and Integrity of Creation, as well as a Co-opted Member of the Interfaith Standing Committee for Socioeconomic Justice and Integrity of Creation, consisting of the Secretaries-General of BAKWATA, CCT and TEC. His views do not necessarily reflect those of TEC or the Standing Committee.

This article has been read 174 times
COMMENTS