Africa and the Climate Change Evil 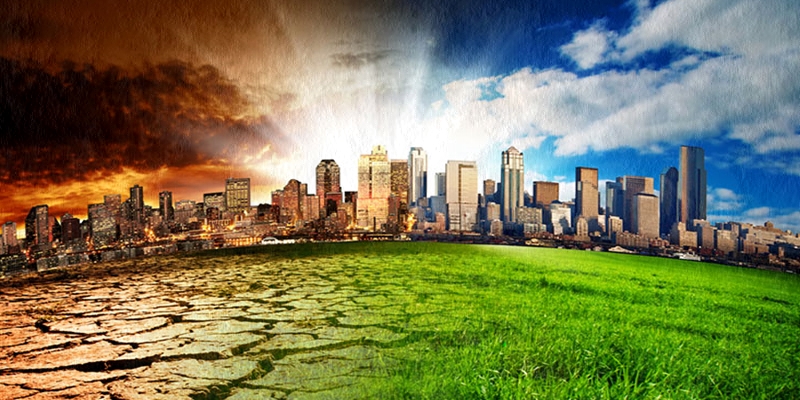 “The world is a gas chamber – inside the world are gases we need to breathe and to live.  There is no escape.  Some people have been putting poisonous gases into this gas chamber, the atmosphere – over the past 200 years, and massively, for the past 30 years….  What we are talking about here is a murder project... What ("climate change”) means … is the slaughter and death of people…through starvation… ‘Annihilation’ is a project to murder on a massive scale… billions of people. I t’s a project knowingly to undertake mass murder ….” – Roger Hallam, co-founder, Extinction Rebellion, YouTube: “Advice to Young People as They Face Annihilation.”

“We are in an unprecedented earth emergency… This is the challenge…for all humanity…. The Terrible Truth is more and more terrible…..A world of 1.5 degrees Celsius (above pre-industrial levels) is a disaster… 2 degrees will be a world impossible to live in…. (The 2015 Paris Accord Climate Change is not going to meet the target)…. We are increasing the level of carbon dioxide into the atmosphere faster than in the part forty million years – that’s 200 times than it would happen naturally…  That’s absolutely climate crazy…. The heat in our oceans is (like) five Hiroshima hydrogen bombs per second…. We have to change our economy fundamentally…. We live under an economy that is inherently destructive of our planet… If we continue to emit gases into the atmosphere, the earth is going to be an intolerable place to live in…. Suffering and deaths of humans… a slow death… Billions of people starving to death…. All of the infectious and communicable diseases are going to increase to increase global temperatures rise… It’s a suicidal recipe.  And the only plans we have is that of (COLLECTIVE) suicide… This is evil; if you can’t call this evil evil, then you are complicit…. This is the Greatest Evil humanity has ever seen”

– Peter Carter; a medical doctor, founder of the Climate Emergency Institute. He has served as an expert reviewer for the IPCC's fifth climate change assessment in 2014.

The IPCC that Peter Carter reviewed for… is the “Intergovernmental Panel on Climate Change,” the United Nation’s body for assessing the science related to climate change. Science!! Clearly, the worst culprits of man-made Climate Change – historically, United States and Western Europe; and currently, China (responsible for 28% of carbon emissions into the atmosphere); United States (15%) – have been hardly listening to the science on Climate Change.

The masses, and youth, in Africa, are clearly oblivious of the magnitude of the Climate Change Emergency. What about Africa’s educated leadership who are aware of these chilling statistics? Africa’s governing and political elite are mental slaves. They read and hear that Africa that has contributed less than 3% of global emissions to Climate Change, would be the worst hit (droughts; famines; floods; low agricultural yields; starvation); but, they wait for dictates from the white man on what to do.  They are unperturbed by the consequences of Climate Change on their people, since they are sure they would flee to the West when the worst will unfold.

Africa: What Climate Change Would Mean

“Statement before the (United States’) House Foreign Affairs Subcommittee on Africa, Global Health, and Global Human Rights ‘The Effects of Climate Change in Africa’… by Caitlin Welsh Director, Global Food Security Program, CSIS April 27, 2021 …Two narratives dominate reports of climate impacts on food security in Africa: that climate-related weather events suppress farmers’ yields, and that climate change contributes to violent conflict and humanitarian emergency in certain ‘hotspots’. These narratives, while true, are incomplete. Instead, climate change affects food security for all Africans through a multitude of pathways, with important implications for U.S. foreign policy…. The prevalence of undernourishment is estimated to be 19.1 percent, or 250.3 million people, across Africa…” (SOURCE: EFFECTS OF CLIMATE CHANGE ON AFRICA HHRG-117-FA16-Wstate-WelshC-20210427.pdf [house.gov]).

“Africa is likely to suffer some of the worst effects of climate change and is ill-prepared to cope, officials said on Monday, advocating better access for the continent to world carbon markets.

Changing climatic conditions from cyclones to forest fires are already spurring poor, rural Africans to move to cities, in a rapid and often chaotic wave of urbanization. Some of Africa's largest cities, including Lagos, Mombasa, Dakar, Dar Es Salaam, are coastal, and by 2030, more than 50 percent of Africans are expected to live in urban areas…. Of course, it is Africa that is least prepared to cope.” (SOURCE: Africa 'not prepared' for climate change (iol.co.za)

Whilst the United States almost always perceive global issues through the prism of their narrow economic interests or "national security," Climate Change as “mass murder” is being planned, is being slowly executed, in front of the eyes of billions of humanity!! Ordinary nurses, teachers, doctors, lawyers, pastors, stockbrokers, scientists…. in the West are turning a blind eye to what Roger Hallam of Extinction Rebellion calls the “Annihilation Project”; as he compares those ordinary people pumping noxious carbon dioxide gases into the atmosphere to those Nazi SS that mass murdered millions of people during the Second World War using poisonous gases. But, unlike the SS guards in Nazi Germany, affluent people in the West are inside 'Gas Chamber-Earth'.

Hallam called as “delusional” the Paris Climate Change Accord of 2015, COP-21, which the West has hailed as one in which the best options for combating Climate Change were agreed upon – for their goal of keeping global temperatures above 1.5 degrees pre-industrial levels. The science shows that it is certain to go above 1.6 degrees Celsius, even 2 degrees Celsius – with “catastrophic consequences" for humanity. Africa’s presidents, and ministers, and bureaucratic elite know this.  Guess what? Over 197 countries are going to meet in the 26th global Climate Change conference, COP-26, in the United Kingdom, November, 2021. The Conference of Parties (COP) is the apex decision-making body of the United Nations Climate Change Framework Convention (UNFCCC), founded in 1994...to stabilize greenhouse gas emissions and to protect the earth from the threat of Climate Change.

The first one was held in Berlin, Germany, in 1995.  Africa’s governing elite would clamor to attend the COP-26 in the United Kingdom – to gain travel allowances.  At COP-26, the richest nations of the world may again not live up to their promises to give Africa $100 billion for Climate Change Adaptation and Mitigation.  $100 billion will not even be adequate for Nigeria alone – with 60% of its population of 220 million people living below the UN poverty level, and accelerated desertification in its northern region, and about 95% of its tropical rainforests vanished.

Under the auspices of the organization, the SLAVE SHIP-FREEDOM SHIP (which fuses the THOUGHT of the Atlantic Slave Trade and Climate Change), I founded in Calabar, Cross River State, in south east Nigeria in 1992, I have been articulating this mantra: “$2 trillion annually for man-made Climate Change Adaptation and Mitigation in Africa from the richest nations of the world. (And from Arab nations that took part in the 600 years Trans-Saharan Slave Trade)”.

Africa’s elites are slow to give traction to my vision because they are still largely mental slaves – they await individuals or organizations in Europe and the United States to first endorse my vision.   It is not for “us”, as Africans, against “them”, the white races. The SLAVE SHIP-FREEDOM SHIP is for all humanity. The people in the West are ‘slaves’ to consumerism; slaves to gluttony; slaves to obsolete economic systems, and their false sense of superiority – they need FREEDOM if humanity is to be saved on planet earth. Call me. Reach out to me.  We don’t have time to waste – the earth’s systems are at a “tipping point”.  This ongoing sense of normalcy, and sedate language, whilst mass murder is being planned and executed is inherently insanity. Like Roger Hallam, my message - which would be imaginatively concocted - is mainly addressed to the youth of Africa, and the world; but also, to enlightened humanity.

By Oswald Hanciles, The Guru

This article has been read 257 times
COMMENTS