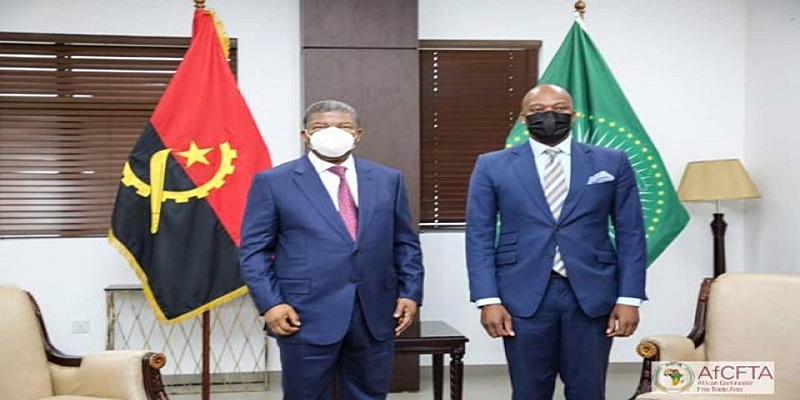 With the headquarters situated in Accra, the capital city of the Republic of Ghana, the Secretariat of the African Continental Free Trade Area (AfCFTA) is now attracting a special business focus for both African countries and foreign countries. For foreign countries, it is an opportune time to strengthen bilateral economic cooperation and install joint manufacturing clusters inside Africa.

Some African countries are focusing on combining resources to step up production and distribution of high-quality commodities, as under the designed regulations goods and products can circulated across borders with taxes – one of the conditions under the newly established African Continental Free Trade Area (AfCFTA).

In that direction, Ghana has witnessed unprecedented number of high-powered foreign visitors. Early August, it hosted a huge business forum during the three-day official visit of President João Manuel Gonçalves Lourenço of Angola. That oil-rich country is located on the west coast of Southern Africa. It is the second-largest Portuguese-speaking country in both total area and population (behind Brazil), and is the seventh-largest country in Africa.

According to official documents, President João Lourenço visited at the invitation of President Nana Addo Dankwa Akufo-Addo. It was a reciprocal visit for President Lourenço, as in August 2019, he first invited President Akufo-Addo. During their meeting at the Jubilee House, the seat of the presidency, both leaders expressed the highest desire to strengthen and deepen their bilateral ties between both countries.

The agreement signed allows for a consultative mechanism for Ghana and Angola to interact regularly on areas of mutual interest, particularly in mining and hydrocarbon industry development, agriculture, education, tourism, transportation, and maritime security.

Angola looks to explore Ghana's vast experience in the mining and cocoa sectors, whilst Ghana seeks to benefit from Angola's rich knowledge in the oil and gas sector. The two leaders vowed to jointly fight threats to maritime security in the Gulf of Guinea.

Under the auspices of the Secretariat of the African Continental Free Trade Area (AfCFTA), the business forum that brought President João Lourenço to Ghana, was held and aimed at expanding bilateral business relations through promotion of two-way investment and mutually complementary partnerships in the relations between the two countries.

It was additionally focused to drive networking for investment opportunities, attempted at exploring ways to boost trade and to discuss concrete solutions to roadblocks hindering investment and increase two-way exports between Angola and Ghana.

Wamkele Keabetswe Mene, the first Secretary-General of the AfCFTA Secretariat elected in February 2020, reiterated during the opening that the AfCFTA was set to effectively harmonize trade in goods and services in addition to improving the business environment by reducing tariff and non-tariff barriers on the continent.

In addition, the move marks a new trade and investment era for Africa and offers a wide range of possibilities for businesses across various sectors in the member states.

Resultantly, this new dawn of continental integration presented a wide-spectrum of opportunities for both Angolan and Ghanaian companies in multiple sectors including agriculture, fisheries and aquaculture, petroleum and hydrocarbon activities, environment, science and technology, and tourism.

"With harmonized trade regulations and better movement of goods and services across the continent, the case for production in Africa for Africa is now a reality, where business operators in the member states can play a significant role," Mene told the forum gathering,  and added further that by consolidating Africa into one trade area provided great opportunities for entrepreneurs, businesses and consumers across the continent, unlocking trade and manufacturing potentials, enhancing industrialization in Africa.

With wide work experience in diplomacy including previous position as the Chief Director for Africa Economic Relations in South Africa's Department of Trade and Industry and South Africa's lead negotiator in the African Continental Free Trade Agreement, Wamkele Mene made a strong case for investing in Africa.

Compared to previous times, Africa is gradually becoming a more competitive investment destination for decades to come because of its improving relative risk profiles, demography, and continental integration.

"My message today is very simple: Africa is open for business. The business potential of the continent is tremendous in various sectors, including agriculture, energy, infrastructure, natural resources, and information and communications, offering opportunities for entrepreneurs," Mene asserted in his speech, and urged the business community to scale up entrepreneurship and turn challenges into springboards.

Angola and Ghana have a lot to gain from working together in fields such as agriculture, fisheries, livestock, industry, oil and gas, the petrochemical industry, value addition to their mineral resources, development of energy resources particularly renewable energy, financial technology and the industry.

Africa is shifting from one of the challenges and gaps to one about opportunities and prospects. The continent is now receiving a high level of interest as an investment destination from investors from across the globe. Indeed, it has a new narrative that should inspire the African diaspora to explore opportunities on the continent and invest in the various sectors.

Businesspeople from Ghana, Egypt, Senegal, Nigeria, United Arab Emirates, among other guests, participated in the business forum held at the headquarters of the African Continental Free Trade Area, where the Angolan head of State encouraged investment in Angola.

Later at the Legislative Assembly session, the Speaker of Parliament Rt. Hon Alban S. K. Bagbin, in his welcome speech urged Africa countries to direct their energies towards building stronger institutions and systems, and further argued that globally, countries that have succeeded in this endeavor, tend to discharge their mandates for the benefits of their people. Speaker Bagbin commended President João Lourenço for his dedication in tackling corruption head-on and reducing economic graft in his country.

On his part while addressing the parliamentarians, João Lourenço commended the Parliament and Speaker Bagbin's leadership, for being able to steer the affairs of the house despite its unique nature. He called for deeper cooperation between the two countries in building a formidable energy sector, parliamentary diplomacy and good governance.

With the inception of the African Continental Free Trade Area (AfCFTA), there is now increased and diversified opportunities to promote trade and attract foreign direct investment, create businesses and spur entrepreneurship, transfer new knowledge and skills within the entire African market space.

Currently, almost 70 percent of countries that have signed the agreement have deposited their instruments of ratification, which means they have legally accepted the obligation to open their markets, reduce their barriers to trade, reduce barriers to investment and adhere to this single set of rules for trade and investment on the African continent.