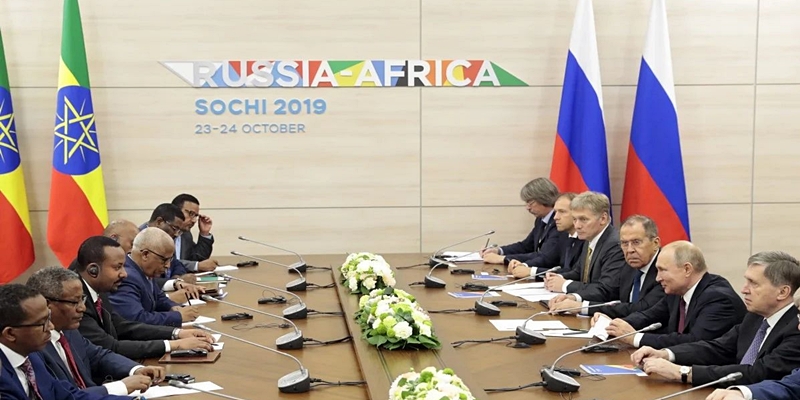 Russia's weak economic presence in Africa has become a thing of concern for some experts in the country and they wonder why the nation is not aggressive with this like its ally, China.

In July 2021, participants at the Association of Economic Cooperation with African States (AECAS), established under the aegis of the Secretariat of the Russia-Africa Partnership Forum (RAPF), agreed that lack of financial support was the major reason for this. The forum, which had in attendance some leading Russian companies and banks, discussed an effective system of financing projects and supporting investment in Africa.

Financing projects in Africa is one of the important keys and, at the same time, the most difficult issue for major Russian companies attempting to expand to Africa, and the financial instruments at their disposal are insufficient, according to Anna Belyaeva, Executive Director of AECAS.

“We explicitly understand that the current funding mechanisms are not enough. We have analyzed the experience of European and Western colleagues from developed countries, our direct competitors in Africa: all of them already have mechanisms and funds focused on Africa,” she said.

Nikita Gusakov, Head of the Russian Export Credit and Investment Insurance Agency (EXIAR), reiterated that Africa was a priority for the agency, outlining a number of deals that EXIAR has been involved in on the continent. He was critical and frank on finance mechanisms and slowness in delivering on investment pledges and the extent these have affected effective economic cooperation between Russia and Africa.

The meeting collectively acknowledged Africa as a huge continent that still requires economic development. Its active demographic growth and abundance of natural resources offer conditions to become the world's biggest market in the next few decades.

Russians are searching for long-term businesses and entrepreneurship in a wide range of sectors, citing the presence of the strong presence of the United States, European Union members, China, India, and many others in the continent.

Geopolitical developments are real and so is the scramble for emerging opportunities by external countries in Africa. Some African leaders and particularly corporate business leaders with foreign players are consistently collaborating and fixing their strategic partnership networks within the continent.

Nikita Gusakov, Head of the Russian Export Credit and Investment Insurance Agency (EXIAR) observes that one of the roadblocks is the lack of adequate knowledge among Russian companies about the opportunities available in Africa. It is partly due to limited interaction with the private sector actors and civil society.

There should be an emphasis on employing policy strategists who actually understand business cultural ideas, the current political and economic trends in Africa. Russians must also invest in more R&D collaborations with their African partners.

In order to raise the economic influence, Russians are working at identifying a structured finance mechanism for mega infrastructure projects such as nuclear power and energy, natural resources exploration and increasing  trade with Africa.

For instance, the United States, European Union members, Asia countries such as China, India and Japan, have provided funds to support companies ready to carry out projects in African countries. During the last Ministerial Conference of the Forum on China-Africa Cooperation (FOCAC), Chinese President Xi Jinping said that China would expand cooperation in investment and financing to support sustainable development in Africa.

The method for financing infrastructure is relatively simple. In general, governments obtain preferential loans from the Export-Import Bank of China or the China Development Bank, with the hiring of Chinese building contractors. The Chinese banking policy allows leading Chinese state-owned enterprises to operate effectively in Africa, with the majority of these activities in infrastructure and construction.

China has always been committed to achieving win-win cooperation and joint development with Africa. Russia could consider the Chinese model of financing various infrastructure and construction projects in Africa.

Official proposals for all kinds of support for trade and investment have been in the spotlight down the years. In May 2014, Russian Foreign Minister Sergey Lavrov wrote in one of his policy articles published on the ministry’s website: “we attach special significance to deepening our trade and investment cooperation with the African States. Russia will provide African countries with extensive preferences in trade.”

Lavrov wrote: “At the same time, it is evident that the significant potential of our economic cooperation is far from being exhausted and much remains to be done so that Russian and African partners know more about each other's capacities and needs. The creation of a mechanism for the provision of public support to business interaction between Russian companies and the African continent is highly on the agenda.”

After the first Russia-Africa Summit in the Black Sea city, Sochi in October 2019, Russia and Africa resolved to move from mere intentions to concrete actions in raising the current bilateral trade and investment to appreciably higher levels in the coming years.

“There is a lot of interesting and demanding work ahead, and perhaps, there is a need to pay attention to the experience of China, which provides its enterprises with state guarantees and subsidies, thus ensuring the ability of companies to work on a systematic and long-term basis,” Foreign Minister Lavrov strongly suggested in 2014.

According to Lavrov, the Russian Foreign Ministry would continue to provide all round support for initiatives aimed at strengthening relations between Russia and Africa.

“Our African friends have spoken up for closer interaction with Russia and would welcome our companies on their markets. But much depends on the reciprocity of Russian businesses and their readiness to show initiative and ingenuity, as well as to offer quality goods and services,” he stressed.

“This predetermines the return of Russia back to Africa, makes this direction a high priority both from the point of geopolitical influence and in the sphere of trade and economic context,” he underscored.

“It is important for us to expand and improve competitive government support instruments for business. Over the thirty years when Russia left Africa, a number of countries such as China, India, the United States and the European Union have significantly increased their investment opportunities there in the region,” Morozov stressed.

With a renewed growing interest in Africa, Russians are looking for establishing effective ways of entry into the huge continent. As result, Senator Igor Morozov suggests creating a new structure within the Russian Export Centre – an investment fund. This could evaluate and accumulate concessions as a tangible asset for the Russian raw materials and innovation business.

His committee has the responsibility for adopting a more pragmatic approach to business,  deepening and broadening economic collaborations and establishing direct beneficial contacts between entrepreneurs and companies from Russia and African countries.

According to the President of the Russian Chamber of Chamber and Industry, Sergei Katyrin, “The primary task now is to accelerate Russia's economic return to the African continent.”

Katyrin observes that Russia's economic presence in Africa today is significantly inferior in comparison to the positions of leading Western countries and BRICS partners. Katyrin proposes that it is time to overcome this yawning gap.

“We need a state financial mechanism to support the work of Russian business in Africa otherwise it will be very difficult to break through the fierce competition of Western companies. We need to focus on those areas where we can definitely count on success,” Katyrin says.

According to UNCTAD's World Investment Report 2020, the top five investors in the African continent are European Union (Netherlands, France, Germany, United Kingdom), United States and China. There are also the Gulf States, United Arab Emirates and Turkey consistently playing active roles, and have had excellent results on the continent.

The Institute of African Studies under the Russian Academy of Sciences, with highly experienced researchers from the Soviet times, most probably has speedy answers to any searching questions on Africa. It can readily provide an appropriate and ready-to-go balanced broad sheet or outline comprehensive economic engagement strategies for Africa. With its human resource, it has the capability of drawing up effective workable ways to accelerate the implementation of, at least, the decade-old bilateral agreements that were signed, and gamut of pledges that have largely remained undelivered in Africa.

Russians hope to make some progress under the Secretariat of the Russia-Africa Partnership Forum (RAPF) which is overseeing the organizational and practical preparations of future summits. At least, after the last summit RAPF should have worked on concrete “three-year African Action Plan” - to set comprehensive step-by-step working programme for the period till next summit, instead it prefers working with its ad hoc agenda, during these years.

Russia has its own approach and pace towards Africa. However, it has to show financial commitment and ready itself for any investment risks especially now when the joint declaration adopted from the first historic Summit held in October 2019 ultimately sets the path for a new dynamism and provides an impetus for scaling up the existing Russia-Africa relations.

This article has been read 124 times
COMMENTS