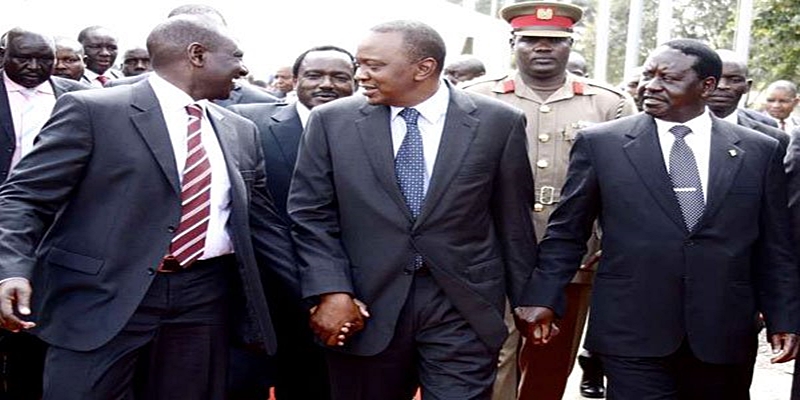 The closing of ranks between President Uhuru Kenyatta and his political arch nemesis, former PM and opposition boss Raila Odinga, has deafening, dissimilar and knock-on corollaries. Their baby, the Building Bridges Initiative (BBI) was killed by the court. Odinga once assertively put it that the BBI was inexorable; and whoever stood in its way would be cracked politically.

Actually, the BBI and handshake have reconfigured and redefined Kenya’s political milieu with domino effects. The Kenyatta-Odinga nuptial aka handshake seems not to augur well with some other players who have been allegedly left out for whatever reasons. Those who exploited Kenya’s long-time bog to create political niches for personal glories are now stuck between the devil and the deep blue sea. All who sought to use Kenyatta or Odinga to prop and stamp themselves in the Kenyan political landscape, under Kenyatta-Odinga acrimony, are outright losers.

Odinga’s impromptu move orphaned many and left many casualties. If anything, among those hard-hit is William Ruto, who would love to be the Kalenjin kingmaker, if not the king, and possibly, president of Kenya.

Ruto was cloned by Daniel arap Moi.  He got his gravitas under Moi’s; and currently under Kenyatta's wings. This is why he’s no guts to call it a quit and be counted.  Former Tanzania statesman, Julius Nyerere once said: if there’s anybody voters need to fear like leprosy is none other than the one who buys others. Because he’s also bought. You can add: if one’s not bought, he robbed somebody. It becomes unbearable when a thief tries to bribe his victims with the same money one robbed them.

Ruto’s future success[es] depend on Kenyatta due to the farfetched assumption that the former helped the latter to ascend to the throne while in actuality Mwai Kibaki is the one who did the magic. He must forget to use Kenyatta once again. For, we don’t know who used whom and whom was used by who in this milieu.

Ruto will be making a grave mistake to believe that Kenyatta will endorse him come 2022. who knew that Kibaki who benefited from the phrase “Kibaki Tosha’ would stab Odinga in the back by refusing to replicate the same? Didn't Kibaki support Uhuru whom he beat in 2002 presidential elections?

If Raila received ‘Raila Toka’ from the man he rewarded with Kibaki tosha, what’s strange for Uhuru to tell Ruto to go and politically forage as he enjoys his bromance with Raila with who they are able to calm the nation? Has Ruto forgotten that Kenyatta and Odinga aim at creating a nation after the efforts to build the country has failed?  Politics is a very dirty and dizzy game. He who thinks he’s standing must watch he mustn’t fall.

When it comes to winners, they’re Kenyatta who seeks to leave a shining legacy and Odinga whose hope for 2022 is still raw.  Some make a goof when they assume that Odinga is too old to run. Wrong. Ask the late Nelson Mandela (South Africa), Abdulaye Wade (former-Senegal), Ronald Reagan (US) Jose Mujica (former-Uruguay) late Michael Sata (Zambia), late Bingu wa Mutharika (Malawi), Muhammad Buhari (Nigeria-incumbent) Peter Mutharika (Malawi-incumbent), Hage Gottfried Geingob (Namibia-incumbent) and the late Beji Caid Essebsi (Tunisia) among others, who became presidents in their 70s. There is no retirement in politics, especially in Africa.

In a nutshell, the Kenyatta-Odinga love is likely to change Kenya’s political landscape for good. In other words, this move’s redefined Kenya’s politics by creating new environment for different forms of politics wherein victory for the state house no longer depends on the UhuRuto calibration. One thing is recommendable. Every Kenyan must support the efforts of creating and building a nation instead of a country. This is where your neighbour, Tanzania, beat you. The only way of developing a peaceful Kenya is through building a nation but not the country.

This article has been read 144 times
COMMENTS