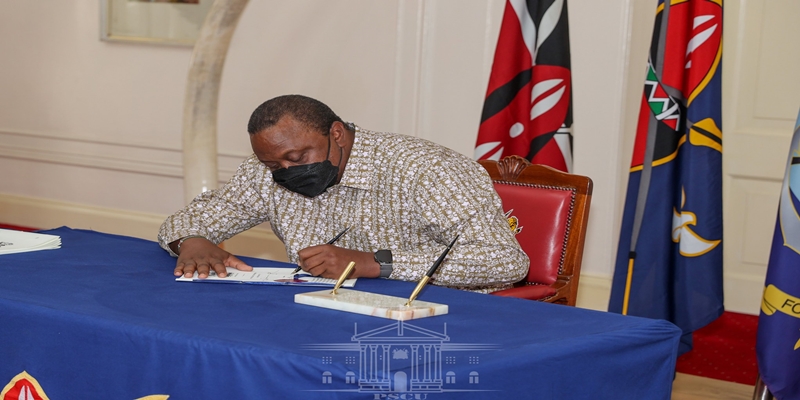 Since HIV/AIDS was declared a national disaster, many organizations including the government of Kenya put up a spirited fight against the virus through a number of multi-media strategies. One of these strategies was the Mpango wa Kando campaign by Population Service International in 2009, a locally based international non-governmental organization. the Mpango wa Kando campaign was supposed to change people's sexual behavior by spouses sticking to their partners.

It is now official in Kenya that cohabiting partners will not inherit the property of one lover when the other dies. This verdict follows President Uhuru Kenyatta’s signing into law the Succession Amendment Bill, 2019, spearheaded by Homa Bay Town MP, Peter Kaluma. According to the legislator, this law that stipulates that only a spouse as defined under the Marriage Act, 2014 qualifies for inheritance, will restore the sanctity of the institution of marriage. A spouse in this case means a husband or wife recognized under the law. Secret lovers christened ‘mpango wa kando’ will henceforth not benefit from the estate of the deceased although the rights of children born during the relationship will be protected.

Kaluma introduced the bill to stop the anguish that widows go through in the hands of secret lovers. To him, secret lovers are opportunists, gold diggers and predators who make wealth seeking calculations in the shadows and strike at the right time.

‘’We want to do away with these attention seekers and opportunists who pop up out of nowhere and demand a share of what they never worked for hence locking out those who rightfully own the inheritance,’’ says Kaluma.

While the law has received accolades from men, it has loopholes that cannot go unchallenged. The law priviliges the male gender and by so doing, extends the subordination of women by men. It does not protect the widow or the mpango wa Kando. It is based on stereotypes and bias that women live off men.

Just peer into the law a little bit. It allows men to have multiple relationships which may be both legitimate and illegitimate. The man is empowered to commit himself in some relationships and be non-committal in others. Men can have the best of the two worlds without a finger being pointed at them. They can cohabit with women without fear of mudslinging.

Mpango wa kando which can be translated as Plan B or the alternative plan is a common cultural practice in Kenya. One can have an alternative when things do not work well at home, the wife is sick, the wife is too old to accompany the man in public or generally when the man wants to feel more manly especially with the midlife crises.

The mpango wa kando who is usually a younger woman in age compared to the man is exploited for her vulnerability and naiveness. While the going is good, according to one of the MPs who supported the motion, ‘they should enjoy the power and high life they were attracted to but should not think we shall let them dip their hands in the wealth’. This means that the mpango wa kando should see herself as a pleasure toy as opposed to an adult woman in need of a meaningful and long-lasting relationship. Although she renders the services of a wife to the man, she is left to fight for her own survival when the man dies.

The legitimate widow is also not protected from abuse and humiliation.  She is painted as a good woman because of enduring betrayal in her relationship. This is stereotypical of a docile non-assertive wife who will take all nonsense in a relationship so that she can be ensured of an inheritance. She will live with the trauma of betrayal from her husband for the rest of her life. She has a right to divorce her adulterous husband while he is living but does not do it.

Both women in this law are losers. It protects the man with his property. Unless our women are educated on what it means to be in a relationship that respects their dignity, we shall have laws which seem to be benevolent to women when in the actual sense, they abuse and misuse women in relationships.

Women should not marry for income or stick to a marriage because of the protection that comes with property. This attitude has seen women battered, dehumanized, suffer depression, disoriented, become unproductive and bewail their womanhood. Society should have safety nets that protect women from the vagaries of the economy and masculine worldview and framing. There ought to be safety nets that cover the woman so that when she suffers betrayal, she can call it quits and start life a fresh. When the economic card is played against her, she can still earn a living independently with peace of mind. She doesn’t have to be an add-on on men, or one of their accessories.

This article has been read 127 times
COMMENTS