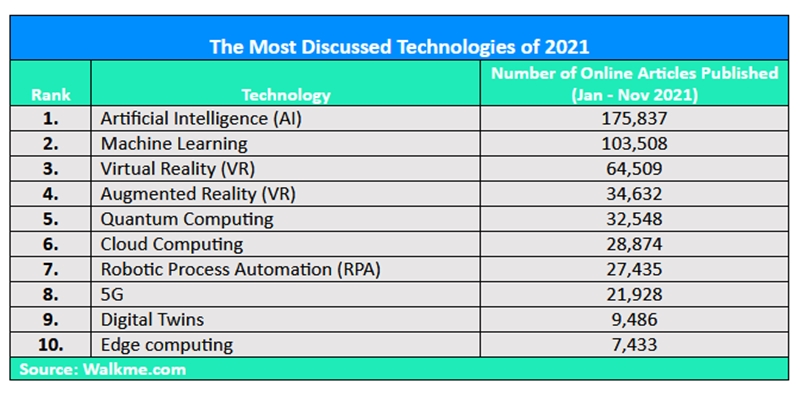 Technology is evolving at a rapid rate and a new group of technologies is set to revolutionise the way people live and work.

Interested in the vast world of technology, Walkme.com utilised the latest data from analytics tool Buzzsumo to discover which game-changing technologies have been discussed the most online in 2021 (January  – November 2021).

Walkme.com found that artificial intelligence takes the number one spot, with an estimated 175,837 online articles written about the technology from January to November 2021 – the equivalent of 526 online articles per day!

Machine learning is in second place - approximately 103,508 online articles were published about the technology between January to November 2021.

In third place is virtual reality (VR), with an estimated 64,509 online articles written about the immersive technology from January to November 2021.

At the other end in tenth position is edge computing. The distributed computing paradigm tech had 7,433 online articles written about it from January to November 2021.

Rafael Sweary, President and Co-Founder of Walkme.com commented on the research:

“With the pervasiveness of AI, it’s no wonder it’s one of the most discussed technologies today. Take another widely discussed topic, the Great Resignation, and sure enough, there’s an AI use-case tied to it.

AI can help understand how humans interact with software and proactively recommend ways to improve the user experience, with actions that can be taken immediately. It’s a win for businesses, who can glean valuable data regarding technology usage and understand where the end-users are having issues. And it’s a win for the employee, who can quickly navigate the company’s tech stack, and not have to struggle with onboarding or training - especially remotely. Everything is done automatically, powered by AI and machine learning to extract data.”

This article has been read 313 times
COMMENTS